If you want to eat at Miami’s oldest and most authentic Jewish deli, you’ll have to drive to Hialeah, Miami’s most Cuban neighborhood.

You drive down a gritty industrial street, once home to a thriving district of Jewish-owned garment factories. One side is lined with sprawling warehouses, auto body and tire shops, the other with rows of small sun-faded homes where Jewish workers lived before they were replaced by the generations of Cuban immigrants that have made Hialeah an emblem of Miami Cubanidad.

Finally you get to Stephen’s Deli, serving classic Jewish style deli food since 1954, even as Hialeah went from Jewish to Cuban and iconic Miami Beach Jewish restaurants like Wolfie’s and the Rascal House closed.

Stephen’s Deli’s new owner is Matt Kuscher, a successful Miami chef and restaurant entrepreneur whose father is Jewish and mother is Puerto Rican. Kuscher grew up in his father’s and grandparents’ Jewish restaurants in New York and Washington D.C., but also with Noche Buena, a Hispanic Christmas Eve, and other Puerto Rican celebrations.

“Different festivities, different cultures, different musics, and different food,” he said. At Stephen’s Deli, he brings them together in a uniquely Miami style. “I love my Jewish side, I love my Spanish side,” said Kuscher, who uses the old-fashioned “Spanish” for “Hispanic.” We were talking from a booth at Stephen’s, as people filled tables and barstools on a recent Friday beneath a red neon sign proclaiming “Hand-slicing pastrami since 1954.”

“In Miami you have both of those worlds,” said Kuscher, who also married a Puerto Rican woman. “I didn’t grow up here, but I love this city so much I feel like that’s my identity.”

Hialeah, one of sprawling Miami-Dade county’s many municipalities, is synonymous with Cuban exile here. Pronounced Hi-ah-lee-ah, it’s a place where Spanish has a Cuban accent and coffee is syrupy shots of jet fuel. The population is 96% Hispanic, 73% Cuban/Cuban-American, and 74% foreign-born. Generations of mostly working-class Cuban immigrants elected Miami-Dade’s first Cuban politician here — and produced a host of major league baseball players. There’s a gallery of family photos towards the back: his father’s bar mitzvah portrait, his grandparents’ wedding, Kuscher’s own bar mitzvah baseball cards. A framed copy of the menu for his grandparents’ Jewish deli in Broward, the model for the Stephen’s menus, hangs by the cash register, which also has a worn copy of Save the Deli, David Sax’s book on the decline of Jewish delis.

Seinfeld plays on a loop on a TV over the bar, while a made-in-Hialeah Caja China, the box used to roast suckling pigs at Cuban celebrations, sits atop a cooler. The imitation Tiffany lamps and brick-thick white plates and coffee mugs are vintage New York deli; as are the original L-shaped chrome bar, vinyl-topped stools, and pale green Formica tables.

Manager Alexis Osorio, a veteran of other Kush restaurants whose husband is the chef at Stephen’s, grew up in Hialeah. “People are proud to be from Hialeah,” she said. “People don’t give it enough credit. My mother came here from Cuba with two girls and made a place for herself here. I understand the nostalgia. I know all the things we lost.”

The menu features Bubbe’s Matzoh Ball soup, potato latkes, pastrami on rye, and other classic deli items, which are the most popular. But there’s also pan con bistec (with potato stix, claro); “goy-ish” croquetas, a Jewish take on a beloved Cuban fritter; and the Newman’s Jewban – a combination Reuben/Cuban sandwich named for the word for a Cuban Jew. “It’s a blending of both worlds, which is a blending of both sides of me,” Kuscher said. 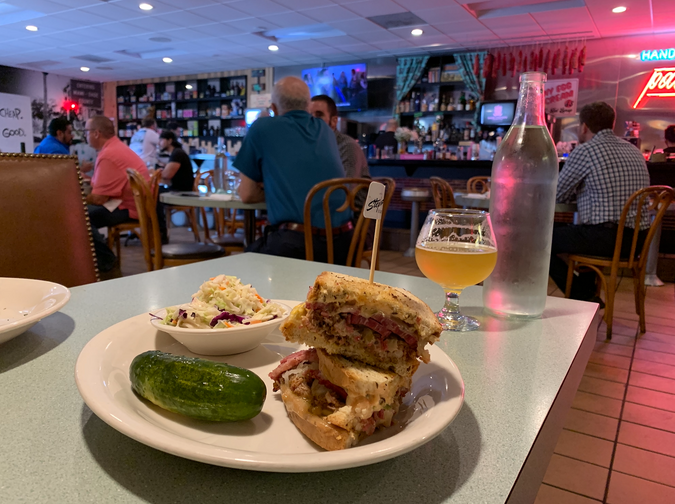 The living link to Hialeah’s Jewish history is Henderson “Junior” Biggers, 84, a large, soft-spoken man who’s worked there since 1957. Biggers is one of the few remaining practitioners of the disappearing art of hand-carving slabs of pastrami and corned beef. His story is featured in the restaurant group’s website, on the restaurant wall and news features on Stephen’s Deli.

“Every owner said I want you to stay,” explained Biggers, taking a break.“All these businesses here were owned by Jews. All of them.”

Biggers remembered people lining up out the door for lunch in the 60’s and 70’s. “They would stand out there and wait to get in,” he said.

As Biggers reminisced, Kuscher stared at him reverently.

“I tell him when he’s ready to retire I’ll pay him to sit on a bar stool and tell stories,” he said.

Older customers also connect Stephen’s to Hialeah’s pre-Cuban history. “I get a lot of 50, 60, 70 year-old Cuban, Colombian business owners who had a Jewish boss or Jewish co-worker who introduced them to this place and they fell in love with it,” Kuscher said. “They keep coming back.”

If the Jewish deli is the more sincere, family and history-oriented side of the restaurant, the Cuban/Hialeah side begins in the hallway leading to the bathrooms and a bar, La Cocina.

La Cocina open on weekend nights, features cocktails with names like Sex on the Sofa and Pata Sucia, or “dirty foot” —Miami slang for a girl who parties hard, then sheds her high heels to walk barefoot in the street as she leaves the club. 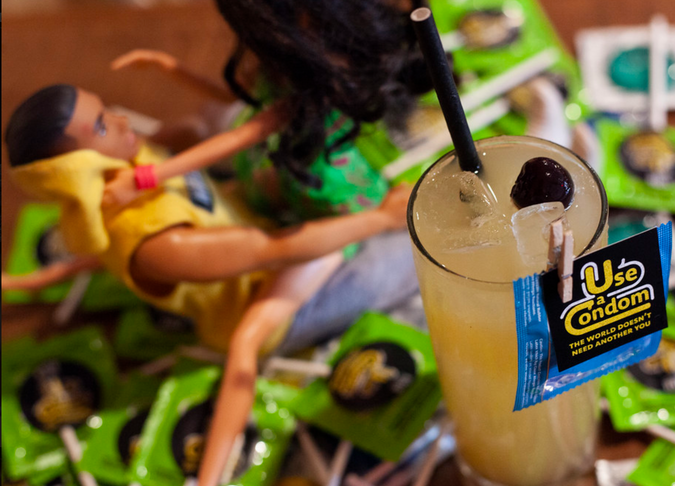 The hall is lined with Lotto tickets, the women’s bathroom papered with images of Walter Mercado, the legendary Puerto Rican television astrologer and personality. The men’s room features Hialeah Spiderman, a local character who cavorted at a nearby intersection dressed as Spiderman; and a picture of Fidel in the urinal. 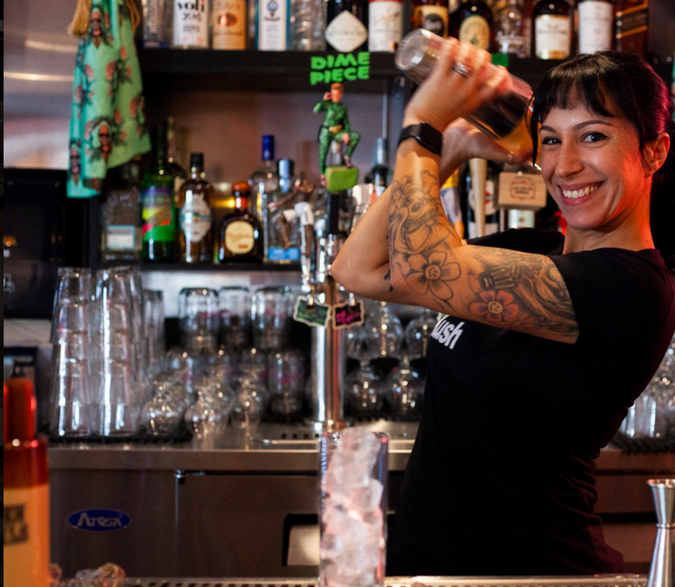 La Cocina has glasses from Hialeah Racetrack, the once elite casino and horse racing destination, and a Ñooo, Que Barato! sign – an only-in-Hialeah discount store. There are multiple other tributes to Hialeah idiosyncrasies and personalities that produce an instant cackle if you know the city, but take forever to explain to outsiders. It’s all, as they say here, so Miami.

“It’s a huge mix,” said Kuscher. “The beautiful part of this place is, when the bar is open, you can see an old Jewish couple having matzoh ball soup and a bunch of 20-year-olds dancing to reggaeton next door. This world and that world are totally different. But everybody comes.”