The wall of remembrance for the missing people in the collapsed condominium tower in Surfside, Florida is on a chain link fence facing the building that fell around them.

Pictures of happy couples, smiling families, many with Jewish surnames, seem to float in a wire net woven with roses and other flowers, wilting in the relentless Miami sun. Colombian-born Luisa Zapata came to pray for many of the residents for whom she works. By Jordan Levin

On Saturday afternoon, Luisa Zapata and her friend Janet Rozo added their own tribute. The two Colombian women, who work for a cleaning company that services AirBnB rentals, knew and had worked for many of the families in the beachfront building that disintegrated before dawn Thursday.

“We came to pray and strengthen the families,” said Zapata in Spanish, her voice cracking. “We know a lot of people in the building. This really hurts us. We love these families. We want to support the community too. We hope that our prayers are received by the angels and reach the families that way.”

The Jewish community in Miami has responded to the shocking tragedy of the collapse of the Champlain Towers South condominium complex with an outpouring of support: donations of money and kosher food and so much clothing, bedding and other supplies that they overwhelmed the synagogues accepting them. There are volunteer mental health counselors, rabbis, even a Jewish disaster rescue team.

“Our Jewish community is like family,” said Rabbi Robyn Fisher of Temple Beth Or in South Miami-Dade. “We celebrate in community, we experience loss in community. It’s something that’s deeply felt for all of us.” 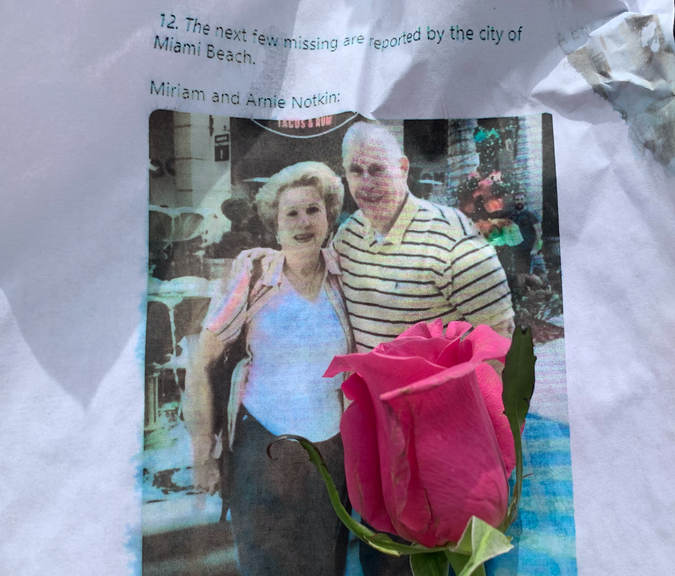 Fisher spoke on Saturday afternoon as she headed to the family reunification center in the Grand Beach Hotel a few blocks from the collapsed building, where loved ones of the 159 people still unaccounted for were gathered. She is is part of the Greater Miami Jewish Federation’s Mishkon Miami chaplaincy program. As a Reform cleric, she was able to drive to the center on the Sabbath when Orthodox clergy could not.

“There are a lot of us trying to make sure we’re always present,” Fisher said. “I went up there to offer prayers, a listening ear, whatever I could do to offer spiritual guidance for these families. Sometimes there are questions. Who are you here for? Do you want to tell me about them? Some people love to talk about their loved ones. Sometimes it’s being quiet, hugging, just being a loving supportive presence.”

The circles of Jewish support extend beyond Miami. Many of the Jews in Surfside and the adjacent neighborhoods are from Latin America, with their own communal support networks. Venezuelan Jews, for instance, are a small circle of expatriates whose ties extend back generations in their close neighborhood in Caracas. 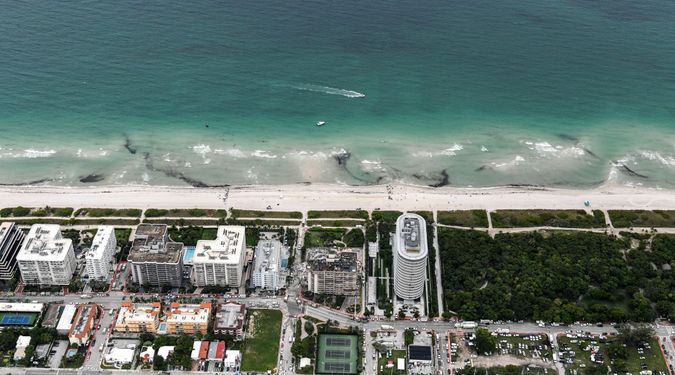 This aerial view shows search and rescue personnel working after the partial collapse of the Champlain Towers South in Surfside, north of Miami Beach, on June 24, 2021. Photo by Chandan Khanna/AFP via Getty

“The Venezuelan Jewish community is extended family,” said theater artist Michel Hausmann, who recited the names of Venezuelan Jews missing in the tower collapse, including Cristina and Leon Oliwkowicz, parents of two sisters who are friends with his wife. “Everyone is a cousin or a dear friend or a friend of a friend. Even though we are expatriated in Miami, it’s still a very tight-knit community.”

That includes his cousin Roy Hausmann, co-founder of the Miami chapter of the Cadena Foundation, started by a group of Mexican Jews in 2005 to respond to hurricanes and natural disasters. Roy Hausmann said the group now works in disaster relief throughout Latin America, as well as in South Africa and Israel, where they’ve been trained in rescue operations. Wall of Remembrance at Surfside, Florida collapse By Jordan Levin

“We have a team of young, mostly Jewish, mainly from Mexico, people trained in Israel by the I.D.F. and other organizations in rescuing people from under the rubble,” Hausmann said on Friday, as he headed to the mountain of rubble where the Cadena team was working a late night shift alongside Miami-Dade rescue workers. “The Jewish community has been extremely engaged – it has been non-stop. We are joining forces.”

That includes his sister Vicki Hausman, who is part of a group of mental health counselors and psychologists organized by Cadena and other organizations to offer counseling to families coping with the terrible stress of waiting on word for their loved ones.

The situation looked increasingly grim by Saturday evening, as rain, flooding, and a stubborn, deep-seated fire that workers have been unable to extinguish, hampered rescue efforts.

The day before, Jewish mental health counselors had mobilized into action.“The minute the news came out we had more volunteers than we could use,” said Vicky Hausman Friday from the reunification center, where she worked for 12 hours. “We have a lot of people to help now and in the long term. Most have experience with trauma and crisis. Some are from Argentina, Venezuela, some are American. Most of us know someone who is missing family members.”

Those without special skills do whatever they can. Ilene Tessler, a realtor in the area for decades, knew Champlain Towers well. “I can’t tell you how many lovely families I’ve put in that building,” she said Friday. “These are our people. This is our backyard.”

Tessler took a car full of requested donations of bedding and clothing to the Shul of Bal Harbor, a center for the community relief efforts, only to find they had no more room. Chafing, she raised $1300 in a barrage of texts and emails on Thursday night, which she spent at Foozo, a kosher restaurant next to her office, to send 100 kosher pizzas for Jewish family members and rescue workers.

“It’s just wrenching,” Tessler said. “I could just cry. I hope everyone gets up and out and helps.”

Greater Miami Jewish Federation president and chief executive oficer Jacob Solomon said the Federation had received approximately $800,000 from 4500 donors since it launched an appeal on Thursday afternoon. Late Saturday evening, Solomon said he had opened his email after Shabbat to see hundreds of messages from Israel, across the U.S. and the world offering solidarity and support.

“It’s breathtaking, humbling and so inspiring,” Solomon said. “This tragedy is resonating with people in a profound way, and they’re expressing themselves as volunteers, as donors, as well-wishers.”

“The horror is so large,” said Michel Hausmann. “But there are sometimes moments of beauty in a tragedy as big as this, created by empathy and love of others.”