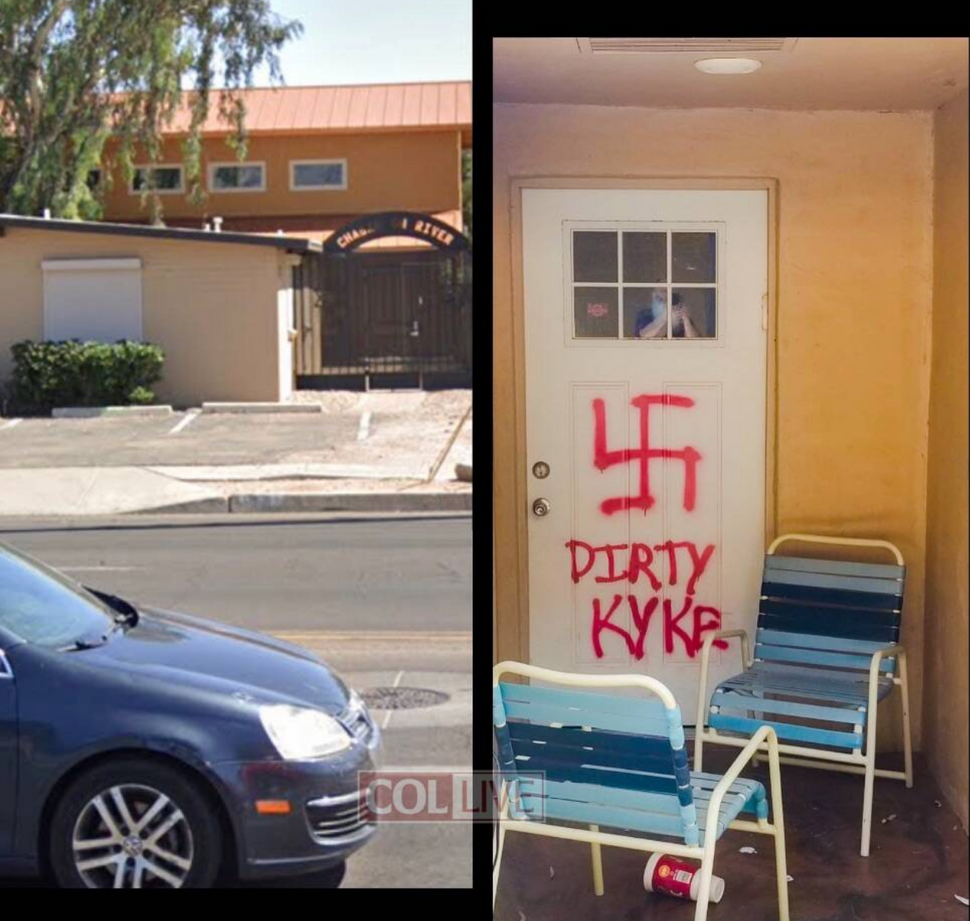 Arizona is not necessarily a hospitable place, and I’m not just talking about the drought and extreme heat. There’s a lot of hate in my home state.

From a sheriff who championed racial profiling and trafficked on an antisemitic web site to a legislature that just decimated what was left of the state’s public education system, it’s one national headline after another.

When a man clad in fur, horns and body paint stormed the U.S. Capitol on January 6, becoming the face of a violent insurrection, no one was much surprised to learn he was from here. And extremists kept the spotlight on Arizona for months with an expensive and dangerous “audit” of 2020’s election results.

The Jewish community has been both victim of and witness to this hate.

Last week, a man was arrested for spray-painting a swastika and the words “dirty kyke” on the door of a Chabad center in Tucson. A month earlier, the front door of a Tucson synagogue was smashed, leaving a “rock-size hole,” according to police.

Those are just two of around 100 incidents in Arizona documented by the Anti-Defamation League since 2020, including:

•At the Holocaust History Center in Tucson, an exhibit was defaced with graffiti reading “Hail Hitler.”

•Swastikas, profanities and the words “white power” were found spray-painted at Sonora Desert Academy in Tucson.

•In Yuma, a city in the southwestern corner of the state, a closed business was burglarized and vandalized with graffiti, including swastikas and derogatory remarks.

•A white supremacist unfurled a Nazi flag at a campaign event for Bernie Sanders in Phoenix.

•A woman’s car was vandalized with swastika graffiti outside her Phoenix home.

•A neo-Nazi group called Folksfront distributed propaganda in Gilbert, a Phoenix suburb, including some labeled with a Star of David, reading “Break debt slavery” and more that read “Manifest destiny” with a swastika.

•Folksfront passed out fliers at Arizona State University’s Tempe campus that read “Hitler was right” and “unity of our blood.” Months later, the group placed a sign on a nearby freeway overpass that said, “Our blood is our faith. Our race is our nation.” 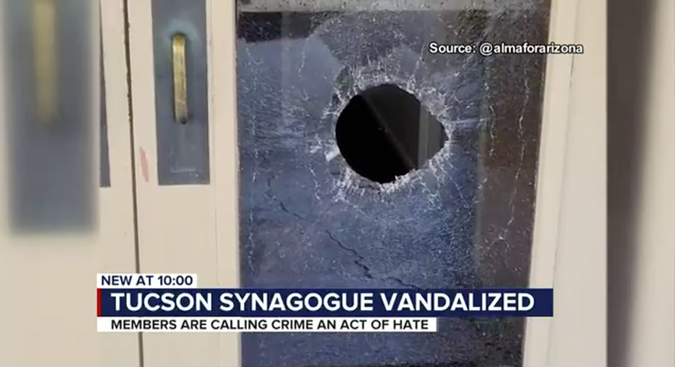 On May 20, a rock was thrown through the front door of Congregation Chavrim in Tucson. Courtesy of KOLD.COM

Tammy Gillies, the ADL’s regional director for San Diego, has also overseen operations in Arizona while the search is on for a new director. Gillies said the incidents her organization tracks are “the tip of the iceberg,” adding that many people don’t report hate crimes – they just want them to go away.

But that isn’t happening. Gillies said that 2020 had the third highest rate of antisemitism in the last several decades, even though schools were closed and people largely stayed at home.

And it’s gotten much worse in recent times. “In Arizona, the reports [of hate incidents] doubled from the two weeks prior to the start of the Middle East conflict,” Gillies said.

With this backdrop, it’s no wonder that people around the world were outraged in early June when The Guardian newspaper broke the news in early June that Arizona’s Department of Corrections decided to administer Zyklon B – used at Auschwitz and other death camps – in the state’s gas chamber. 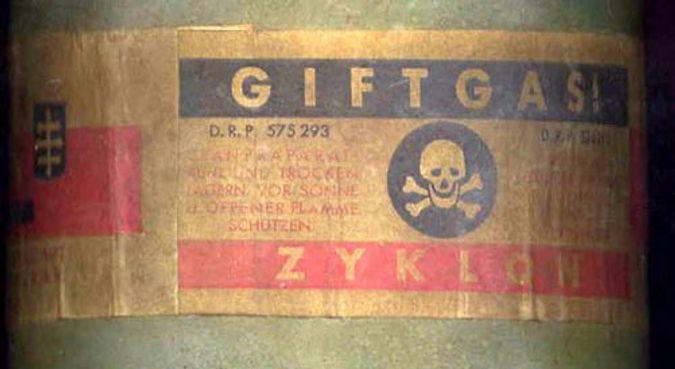 The ADL hasn’t taken a position on that, according to Gillies. Others have.

“While there can be no doubt about its effectiveness — the Nazis used it to kill millions of innocent Jews — it is that very effectiveness as an instrument of genocide that makes it utterly inappropriate for use by a civilized state in a proceeding sanctioned by the state and its judiciary,” the American Jewish Congress said in a statement.

So why live here? And more importantly, how do you live a Jewish life here amid the hate and fear?

For me, the answer to the first question is simple. For better or worse, Arizona is my home.

The second answer is tougher.

My mother’s family moved to Tucson from Forest Hills, Queens in the mid 1950s; around the same time, my father’s family left Chicago for Scottsdale. Neither side was particularly religious, but members of my family were active participants in Jewish life in Arizona. I’ve taken that as a lesson and a legacy.

My parents met at the University of Arizona in Tucson and were married in a synagogue neither belonged to. Someone gave me a Hebrew name when I was born – Natanya, after my grandfather, Nathaniel. They sent my sister and me to religious school. I remember making challah, winning a prize for my costume in a Purim parade. After my bat mitzvah, as I like to say, I pretty much took the personalized Lucite and ran. No more organized religion for me.

Still, my whole life I knew that I was Jewish and I never shied away from it. My mom and I would snicker at family friends who tried to “pass” as non-Jews. Looking back, there’s nothing funny about it. It was a sign of the times – and the place.

In 1991, I moved back to Phoenix after living for several years in southern California, Washington, D.C. and New York City. I figured I’d stay a year, tops. This year marks 30.

I found work at a local newspaper and, not long after, a boyfriend who worked in the advertising department. He was from Queens, a few towns over from my mom, with dark curly hair and a Jewish last name. Turned out, he isn’t Jewish.

The truth was that it didn’t really matter to me. We never even talked about whether we’d raise our kids as Jews. Ray had clearly given it more thought than I had, because one night when I was pregnant with our older daughter we sat across from one another at our favorite pizza dive, and he said, “I want our daughter to be raised so she knows she’s Jewish before someone else tells her.”

In that moment, it all fell into place. I understood why my grandmother found community at the bridge table, why my grandfather joined all those synagogues, why my parents sent me to religious school. In a place like Arizona, you’ve got to know who you are.

I looked at Ray with tears in my eyes and said, “OK.”

That’s how I became the mom who brought the dreidels and gelt to my kids’ elementary school classes each year at Hanukkah. Around the New Year, I dropped off round challahs for their teachers. I began hosting an annual Passover seder for friends and neighbors.

On a clear fall evening in 2015, loved ones from across the country gathered in downtown Phoenix for our daughters’ b’not mitzvah, held in a mid-century building that once housed Beth Hebrew, the city’s first Orthodox synagogue. The service was simple but heartfelt; the hora was awkward – a ring of mostly first-timers.

There was nothing kosher about any of it, down to the hot dogs served from a food truck after the service. But, despite the odds, there was love and community and while I know that a lot of traditional Jews would be (and probably were) horrified, to me, it felt necessary and important.

We showed up. And we’re not going anywhere.