For some American Jewish athletes, Team Israel is a ticket to the Olympics 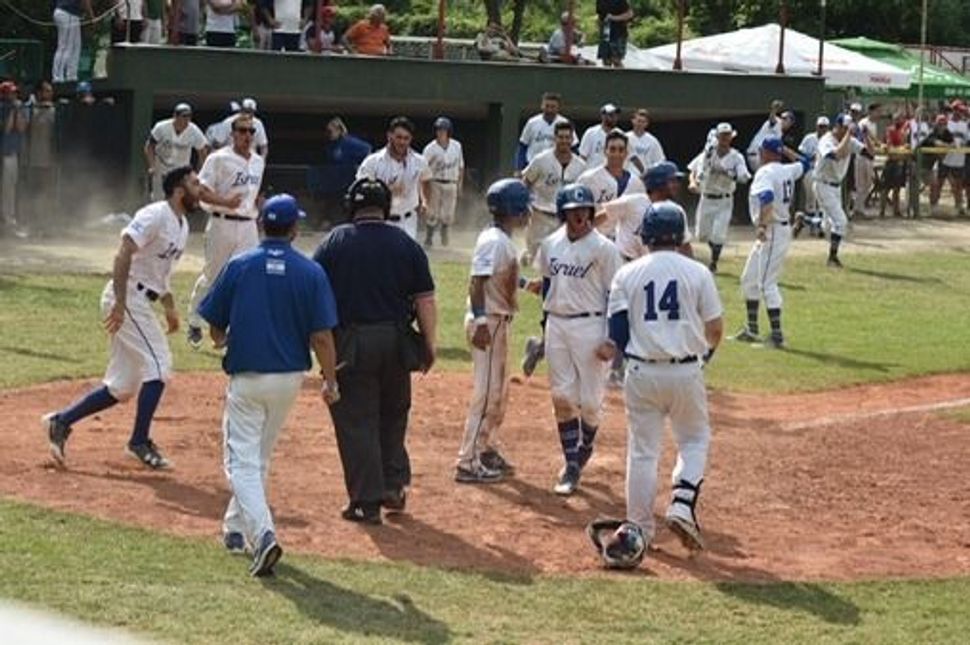 For some Jewish American athletes, competing for Israel made their Olympic dreams possible.

But in addition to the opportunity to be an Olympian, many of these American competitors report a particular and powerful pride in representing the nation. Their journey to the Olympics, they say, has connected them more closely to their heritage.

Israel’s baseball team, one of six baseball delegations in the Tokyo 2020 Olympics, is made up almost entirely of Jewish American minor league players.

“We’re a bunch of really good ball players that at one point or another have been overlooked,” Wolf said. One player, Jon Moscot, was sidelined by elbow injuries. Another, Blake Gailen, who Wolf called a “once or twice in a lifetime talent,” was passed over for higher-level opportunities in America because he is shorter than the average outfielder.

In 2018, Wolf — who runs a nonprofit that supports minor league players — called the baseball team’s general manager, Peter Kurtz, to offer his help building baseball programs in Israel. Kurtz immediately offered him a spot on the Olympic team.

Mitch Glasser thought he was reaching the end of his playing career when Kurtz asked him to join the team the same year. Glasser agreed and began playing for Team Israel in the tournament to qualify for the Olympics. The likelihood of Israel qualifying seemed low, but he wanted to try. “What a fun way to finish my career playing baseball,” he said.

In order to play for Israel, athletes must be Israeli citizens, but Israel’s Law of Return offers Jewish athletes an expedited path toward dual citizenship.

When Glasser became an Israeli citizen in 2019, he visited the country with his wife and other members of the team, he said.

Wolf flew to Israel and received his Israeli passport before competing in the first qualifying game. After the third tournament in Italy, as other players were returning to America, Wolf decided to stay in Israel, where he lived for six months before the pandemic. 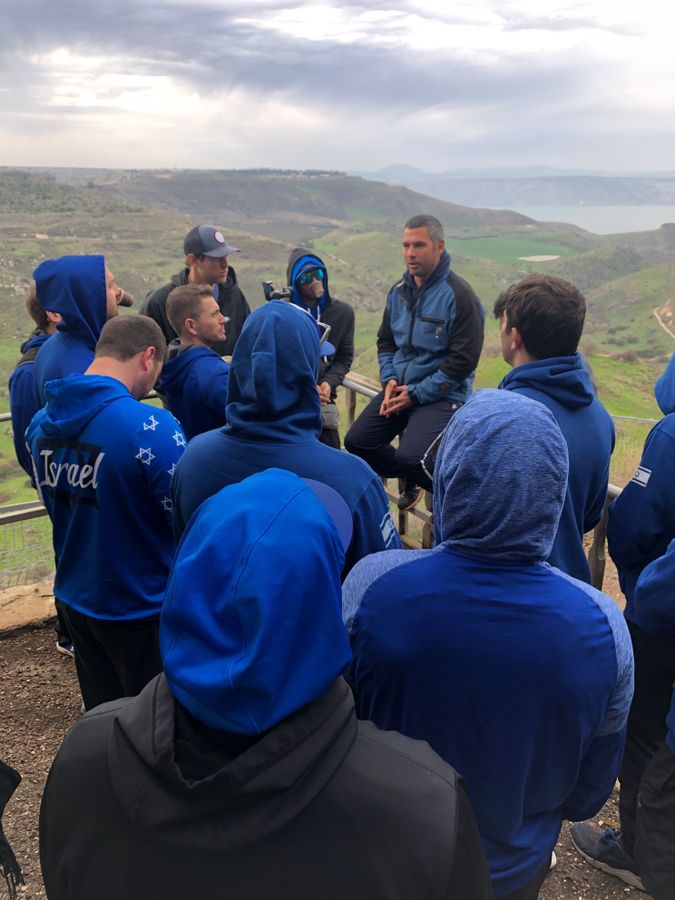 Team Israel, which is composed mostly of American-born Jews, on a visit to the north of Israel in January 2020. Courtesy of Mitch Glasser

“I always thought baseball was my ticket to do really cool, wonderful things in my life, but I never expected it to give me citizenship to another country,” Wolf said. “It’s given me this opportunity to start to understand another side of Jewish culture that I had never thought I would experience.”

Wolf and Glasser’s experiences are shared by a number of Jewish athletes. “We’re seeing more predominantly that people thought they would come to Israel and think ‘Oh no, that’s the end of me playing baseball. That’s the end of me playing football.’ But really, it can be the beginning,” said David Wiseman, who runs the Israeli sports news social media page Follow Team Israel with Shari Wright-Pilo. “In many instances they can represent Israel when they may not have been able to represent wherever they came from.”

“Look across every country. What happened with Israel and baseball was really the tip of the iceberg,” said Wiseman. In addition to American athletes, Israel has a history of Russian Jews representing it in winter sports and gymnastics, and Ethiopian Jews in track and field events.

Israel is one of many countries that give non-native athletes citizenship to compete in the Olympics, Wiseman said, so he called criticism of non-native Israelis playing for the nation unfair. “No one seems to have any issue with people from Aruba playing for the Dutch. But how is that any different?” he said.

American athletes playing for Team Israel say they belong on the team, and cite the religious and cultural significance Israel holds for Jews around the world.

One of the first American Jewish athletes to play professionally for Israel, Tal Brody, a former basketball player who grew up in Trenton, N.J., was drafted to the NBA in 1965 but chose to play for Israel after competing in the Maccabi Games. Brody moved to Israel and has lived there ever since.

“It’s more than just being an athlete in any other place,” Brody said. “You carry that weight on you, that you’re talking about a country that many people don’t understand.”

Competing in Israel also changes an athlete’s perspective on the competition, he said. “When you’re playing with the United States’ team, you’re playing as a favorite. You feel that you’re the best in the world.” Brody said. When playing for Israel, “you feel the meaning of being an underdog.”

Like Brody, swimmer Andi Murez first visited Israel while competing for Team USA in the 2009 Maccabi Games with her older brother, who is also a swimmer. Her first time in Israel, Murez traveled around the country and learned about historical sites with the American team before the games, she said.

When she returned to Israel for the 2013 Maccabiah, she decided to make aliyah after talking to other swimmers who competed for the country, she said. Murez finished her final year of university at Stanford and moved in 2014.

Now in medical school, Murez will swim for Israel in this summer’s Olympic games, her second after representing Israel in 2016. “It’s hard to explain the feeling. It’s such an honor to represent the country,” she said.

For Danielle Goldstein Waldman, an equestrian, representing Israel as an athlete was a lifelong aspiration. From a young age, Waldman’s family discussed the possibility of her playing high-level sports for Israel rather than the United States, if she had the opportunity to represent either country, she said.

Waldman’s family instilled in her an appreciation of competitive sports, in addition to a strong relationship to Israel. Originally from New York City, Waldman’s father, a squash player, was a professional athlete, and her uncle had competed in the Maccabiah Games in Israel.

When she first visited Israel for her bat mitzvah, her connection to the country and her desire to represent it athletically grew stronger, she said. “It had a cultural significance for me to do it, rather than just representing a place where I was born,” Waldman said. “It was like ‘Alright. If I’m going to do this for sport, I’m going to do it for Israel.”

After training and competing throughout college, Waldman made aliyah in 2010. She delayed becoming a citizen until she was 24 to be exempt from army service requirements. “It’s not that I didn’t want to do the army,” but equestrian training had to happen outside the country, she said.

In 2013, Waldman moved to Putten, the Netherlands, where she primarily lives and trains. She continues to spend a month or two training in Israel in a given year, as well as roughly the same amount of time visiting family in the United States.

Based on her world ranking at the time, Waldman was chosen to compete for Israel in the qualifying round in May of 2019. Her performance, along with that of the three other equestrians on the qualifying team, will allow Israel to send its first equestrian delegation to the Olympics.

“As an individual athlete, you work towards a goal, and to be able to accomplish that goal is so satisfying,” Waldman said. “To be able to do it for Israel brings in a whole other element of making my family proud, making my country proud, and making my heritage proud. It’s an incredible sort of feeling.”

“I think it’s really difficult not to think about the emotional significance of the athletes,” Wiseman said. “Israel is older than the ancient Olympic games, yet younger than the modern Olympic games. These people are representing a country that defied statistics to exist.”

“When I put on a jersey, I feel very proud that Judaism is more than just Israel,” Wolf said. “It’s more than just the Jewish community around the world. It’s a sense of community identity that Jewish athletes haven’t received on a mass scale.”

When the national anthem plays before Glasser’s games in the United States, he takes time to gather his thoughts. “It’s something different when I hear hatikvah play. It gives me goosebumps every single time,” he said.

He continued: “My grandma escaped Nazi Germany and eventually made it to the U.S. I’m the one that got Israeli citizenship. I can wear it across my chest for my grandparents who were scared to express their Jewishness. There’s something special about that to me.”

For some American Jewish athletes, Team Israel is a ticket to the Olympics