‘There is no Kohen:’ A minyan in the shadow of disaster mourns its losses 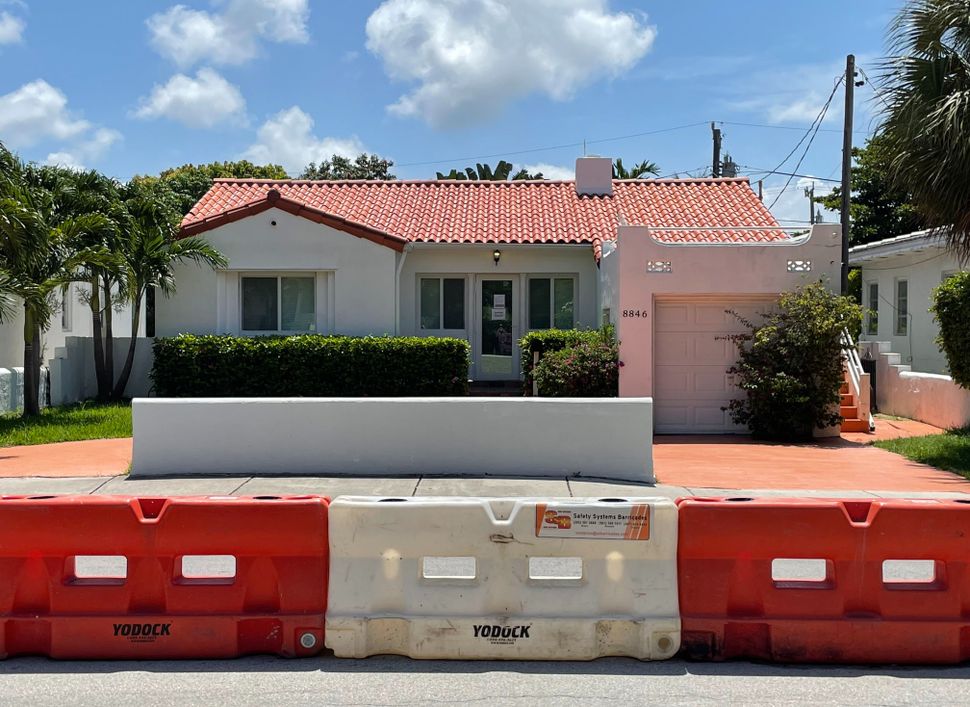 The Surfside Minyan meets in this rental house less than two blocks away from the Champlain Towers South. By Louis Keene

About 30 people packed into the living room and dining room of the white stucco house Saturday as a Torah scroll was laid on the bimah and the gabbai prepared to summon a kohein for the first aliyah. But there were no kohanim among them, because this congregation’s was in the rubble.

“Ein kaan kohein,” the gabbai said. There is no Kohen present.

It was a grim reminder of the hole left in Surfside Minyan, a Shabbat-only prayer group that meets in a rental home near the 12-story Champlain Towers South, which collapsed on June 24, burying nearly 150 people in a mountain of debris.

Surfside sits on a barrier island that is home to several synagogues and a handful of independent minyanim, and many of the thousands of Orthodox Jews who live here frequent more than one — especially during the summer, when a long walk can mean arriving drenched in perspiration or rain. No Saturday-morning prayer service was a shorter walk from the Champlain towers — about one block down and one block over — than Surfside Minyan.

Six of Surfside Minyan’s 20 families were in the tower when it collapsed. Three families escaped harm. From the other families, four people are missing.

Across from the house Saturday were several police cars and a semi-trailer from the South Florida Search and Rescue agency. The weekly bulletin, posted on the front door, said the congregation was praying for “a clear and open miracle”: the rescue of Tzvi and Itty Ainsworth, Henry (Chaim) Rosenberg, and Brad Cohen. 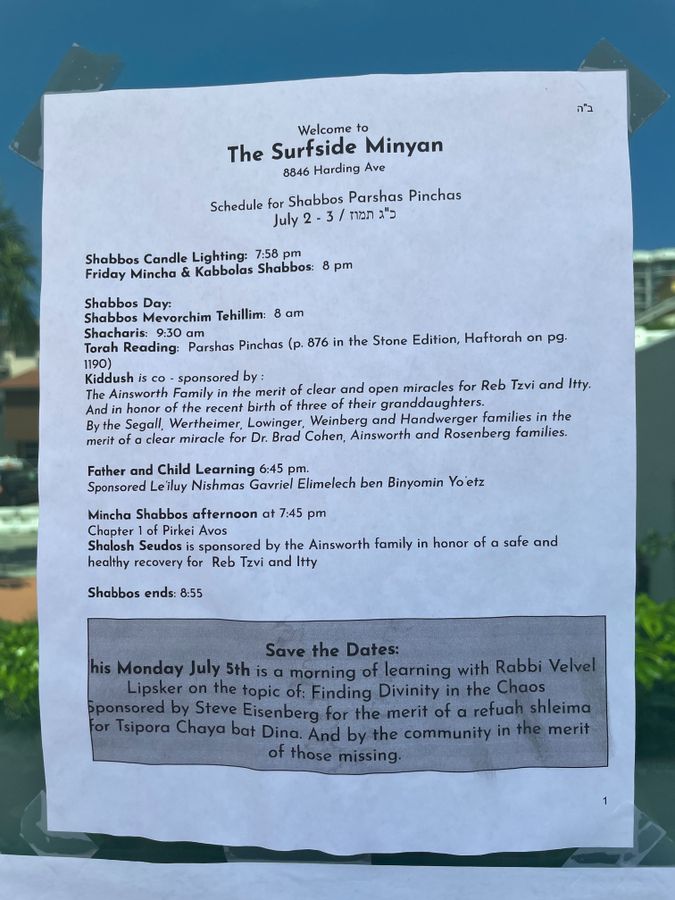 The weekly bulletin was posted on the front door. By Louis Keene

To Rabbi Aryeh Citron, who leads the minyan, they were what brought it to life: Ainsworth held down a spot in the kitchen, his siddur always in the same place atop a cabinet. Cohen always came bearing a d’var Torah. And Rosenberg, though less of a regular, was the minyan’s sharpest dresser.

“If anybody doesn’t remember who he is because they don’t remember his name,” Citron said, “just describe him as wearing a perfectly pressed white shirt, because he always wore that.”

The absence of two or three congregants might not be felt numerically for a few weeks. Turnout has been strong in the two Shabbats since the collapse. Another occasional shulgoer who lived in the building but survived the collapse, Barry Cohen (no relation to Brad Cohen), can receive the first aliyah and perform the priestly blessing on holidays.

But the emotional void already feels immense at a shul too small for regulars not to know each other.

“Walking in, knowing that you were missing two people that were regulars, is shocking,” said Moises Wertheimer, a travel agent who has attended the minyan ever since he moved into Champlain Towers North with his family nine years ago. “It’s sad, shocking, weird, disturbing.”

Wertheimer did not know Brad Cohen well, despite also swimming laps a lane over from him at the Surfside community pool. But the Shabbat before the collapse, the two wound up walking back from minyan together. They ended up standing outside the building talking for about 30 minutes, about triathlon training and their families, before going their separate ways. It was their only conversation.

“That’s another part of the shock,” Wertheimer said. “Even though I wasn’t so close with him. But every time we daven together, he was the Kohen.”

When Wertheimer’s wife woke him up with the news just before 2 a.m. on June 24, he threw on his Hatzalah emergency-services uniform and went straight to the disaster site to help. He didn’t return home until reinforcements arrived six hours later.

As the Torah reading concluded on this past Shabbat, Wertheimer rose to the bimah to recite Birkat HaGomel, the blessing said upon surviving peril. Then Citron said a prayer for the rescue of the missing members.

Even as his usual spot in the kitchen remained unoccupied, Tzvi Ainsworth — ”Reb Tzvi,” as Citron referred to him — was present in the service: Citron was reading from his Torah scroll. And a discovery at the first Shabbat after the collapse invested it with new meaning.

According to Citron, Ainsworth had ordered silver adornments, rimonim for the scroll, only to discover they didn’t fit.

“He messaged me Tuesday — ‘I have the crowns. They don’t fit on the sefer. Should I leave them on or bring them home?’” Citron recalled. The rabbi replied five minutes later: Leave them at the shul.

But he had already left with the ornaments. ‘I’ll bring them before Shabbos,’” he told Citron.

When the building collapsed, Citron assumed the crowns were lost. But when the ark was opened before services started on Saturday morning, the rimonim were there, shining atop the scrolls.

Reb Tzvi had brought them back.

In his sermon, Citron expounded on the righteousness of his missing congregants. Like Pinchas, the hero of the week’s Torah portion, Ainsworth and Cohen embodied the daily grind of devout Judaism — they dwelled among the people, and lived to serve their peers with holiness and commitment. They were always on time for services, Citron said with a smile, which made it possible for him to arrive late every once in a while.

It was the same kind of devotion, he said, that earned Pinchas the priesthood, that meant he and his descendants would be kohanim — an office suddenly vacant at the Surfside Minyan, a presence that would take a clear and open miracle to restore.

‘There is no Kohen:’ A minyan in the shadow of disaster mourns its losses