At Surfside memorial, a couple that nearly moved to Champlain remembers their doctor who did 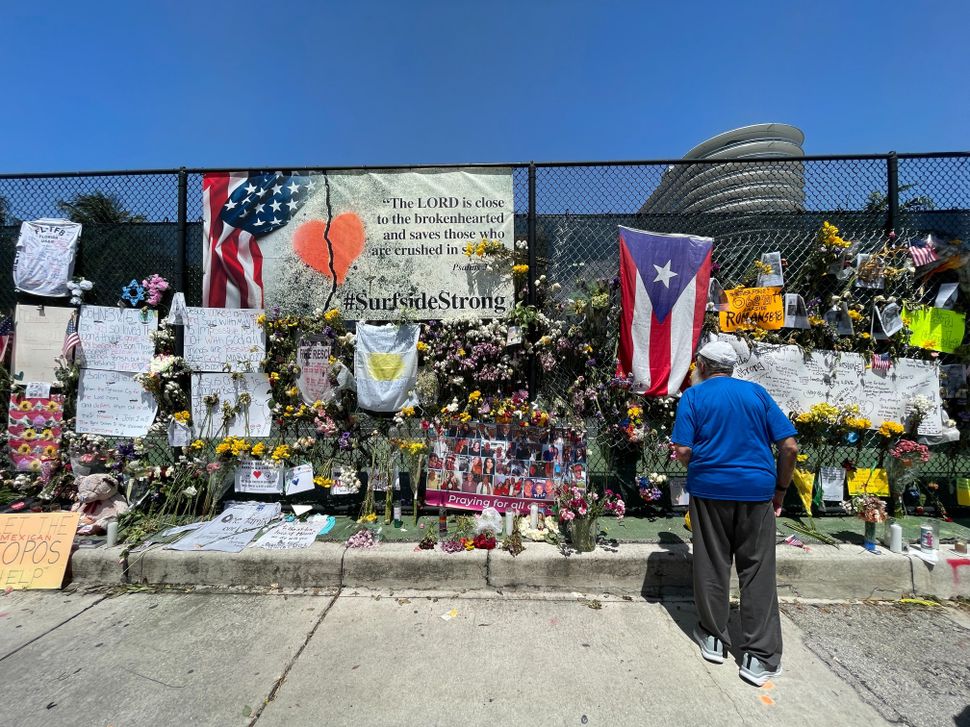 Moshe Schneider, 70, at the Surfside Memorial. By Louis Keene

Less than 12 hours before dynamite felled the remainder of the tower Sunday, covering the scene and everything around it with a film of misery and detritus, Moshe and Bluma Schneider took their first trip to the Surfside Wall of Hope and Memorial, a display of photos of the dead and missing on the fence of a tennis court one block west of the site. It was sweltering, and both were wearing hats as they approached the memorial, which was strewn with flowers, signs and votive candles.

Bluma Schneider pointed to a picture of Brad Cohen, who is one of the 120 people still unaccounted for in the rubble of Champlain Towers South. Cohen was the Schneiders’ orthopedist — he treated her foot and his shoulder — and he sat behind Moshe at the Shul of Bal Harbour, a Chabad-Lubavitch synagogue that is the lodestar of Surfside’s Jewish community.

“He used to sit next to me in daf yomi on Shabbos and Sunday when he wasn’t working in his office,” Moshe, 70, said. “He was always asking questions. Very attentive.” 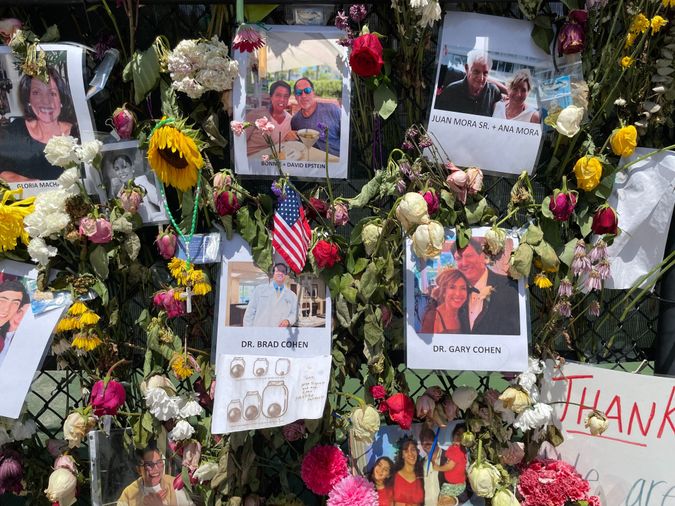 Pictures of Brad Cohen and his brother, Gary Cohen, who are still unaccounted for in the Champlain Towers South collapse. By Louis Keene

Brad Cohen, an avid athlete who ran an orthopedic surgeon and sports medicine practice, moved into the 11th floor of Champlain Towers South about six months ago. His brother, Gary Cohen was visiting from out of town — they were looking after their ailing father — and staying in the condo the night of June 24, when the towers collapsed at around 1:30 A.M. Both remained unaccounted for when the building was demolished late July 4. Search and rescue operations continued into July 5.

When Bluma broke the fifth metatarsal in her foot, Dr. Cohen told her she didn’t need surgery — in fact, he said, he had broken the same bone jogging. Knowing his patient was also frum, he shared personal news: he had recently won a subscription to Chayenu, a weekly guide to daily Torah study, in a charity drawing at the Shul.

“He was so excited about that,” she said.

When the Schneiders moved to Surfside nine or so years ago, they thought about buying a condo in the Champlain building. “Nice sized apartment, not updated or anything,” Bluma said. “It was roomy.” Instead, they settled on a condo about six blocks away, at 93rd and Collins, from which they can see the disaster’s triage center.

Moshe is now board president of the condominium tower where the Schneiders live, which is a bit smaller than the Champlain at just 88 units. Their building was completed in 1989, which gives it a few years before its 40-year inspection, but they won’t be waiting that long. Moshe is bringing in a structural engineer, a geotechnical engineer and an electrical engineer.

He started listing out the costs: the electrical panel would run about $100,000; four new elevators, $1.1 million.

“It’s gonna cost a bunch of money,” he said. It would have to be paid, Bluma interjected: “Whatever it is, you wanna live there, you gotta live there! You wanna save the building?” 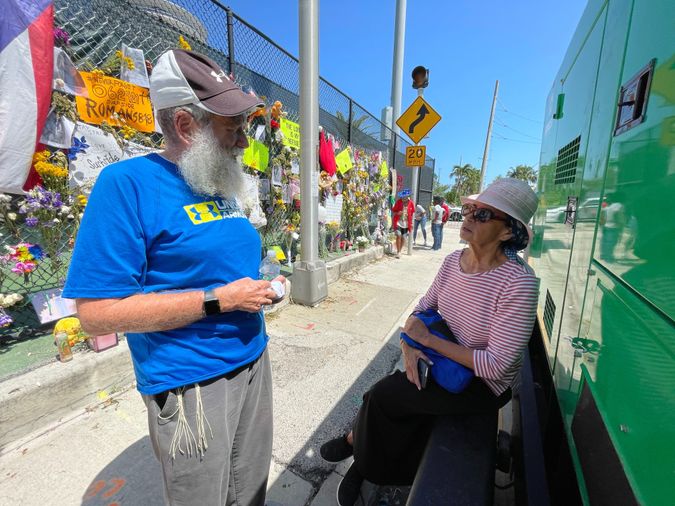 Moshe had learned a new word in the wake of the Champlain tower disaster: spalling, a sort of corrosion. His building has 46 support columns. “We have six with minor little cracks. That could be a little bit of rusting, a little spalling. You gotta fix each one. I hear it’s about $6,000 apiece.”

Asked if he expected residents of the building to complain about the expenses, Moshe said he expected none.

At Surfside memorial, a couple that nearly moved to Champlain remembers their doctor who did