The Surfside disaster devastated the Young Judaea community, which lost several members in the collapsed tower 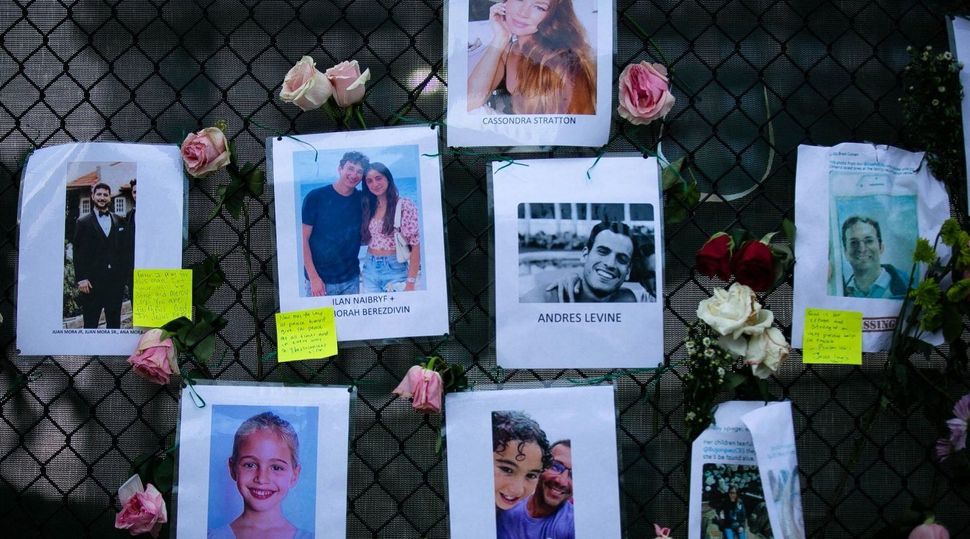 Images of Andres Levine, Ilan Naibryf and Deborah Berezdivin, three of the Jewish victims of the Surfside building collapse, in center among other photographs of those missing posted at a makeshift memorial on the building site in Surfside, Fla., June 26, 2021. Photo by Andrea Sarcos/AFP via Getty Images

The mourners came from San Juan to the Surfside condominium where George Matz had lived to attend their friend’s funeral after his monthslong battle with COVID-19. Theirs was a bond that spanned generations, ZIP codes, and — perhaps most importantly — edahs, or age groups — in Young Judaea, the U.S.-based Zionist youth movement that is central to Jewish life on Puerto Rico.

Now several of them are among those lost in the collapse of the Champlain South Towers, as are family members who lived in the fallen building.

They are Jay Kleiman, 51, and Frank Kleiman, 55, and their mother, Nancy Kress Levin, 76, — she and Frank lived in the building. And there is Deborah Berezdivin, 18, a lifelong Judaean and former president of Puerto Rico’s Young Judaea chapter. Her boyfriend, Ilan Naibryf, a Floridian who she met at camp, had also come for the shiva and funeral. George Matz’s children, who were not in the building when it collapsed, are also Judaeans.

Berezdivin, Naibryf, and Kress Levin are still among the missing as of publication, as is Jay Kleiman, who worked in the garment industry in Puerto Rico. The body of Frank Kleiman, who lived in the building, was recovered from the rubble June 28. He was a newlywed who had just started a postal company, according to the Jewish Telegraphic Agency. The body of his wife, Anna Ortiz, was also recovered that day, as was her son, Luis Bermudez, 26.

Young Judaea offers camps and year-round programs for children and young adults across the country, but the Kleimans, Naibryf and Berezdivin had all attended Camp Judaea, a sleepaway camp in Hendersonville, North Carolina, where Puerto Rican families from San Juan and South Florida converge each June. The tradition of campers and their families staying at a Hendersonville hotel the night before camp starts is an essential Young Judaea experience, a way old camp buddies renew their friendships well into adulthood and new campers learn what the tradition is all about.

The tragedy rippled through the Young Judaea community. According to two people who asked not to be identified because of the sensitivity of the subject, last week Camp Judaea brought in grief counselors to spend time with campers, among them relatives of the victims. 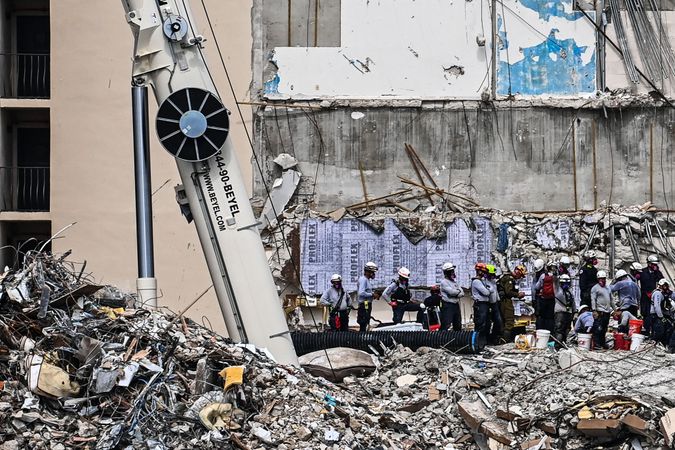 “Our camp is really a special place,” said Arielle Williamson, a lifelong Judaean from Denver who was friends with Berezdivin and Naibryf. “What happens to one person vibrates through the entire community. When one person’s hurting, we all hurt.”

That pain has been particularly acute in Puerto Rico, where Young Judaea has had a foothold since the late 1970s, according to Diego Mendelbaum, director of the Conservative synagogue Shaarei Tzedek in San Juan. About 30 Puerto Rican children are currently at Camp Judaea or Camp Tel Yehudah, a Young Judaea camp in Sullivan County, New York.

“What makes our YJ chapter in Puerto Rico unique is that it’s one of the most active communities,” said Mendelbaum’s daughter Michal, who, like Berezdivin, is a former president of the San Juan chapter. “They say there’s strength in numbers, but we’ve really made our voice heard here, even with a small group. We’ve made ourselves seen in our island.”

Even at camp with other Americans, the Puerto Ricans stand out for their enthusiasm and their closeness with each other. There, Deborah Berezdivin — whose grandparents were one of the founders of Young Judaea in Puerto Rico — was a natural leader and a role model, Michal Mendelbaum said.

“She’s always in the back of our head when we’re planning stuff,” she said. “She was always an example for me to follow, because of the way that she led us.”

Mendelbaum was also close friends with Jay Kleiman’s son. Qualifying that she did not know the elder Kleiman well, she said she had never known him to miss one of his son’s basketball games. “He’s one of the kindest men I have ever met. He’s an amazing father,” she said.

Puerto Rico’s Jewish community dates back to the early 20th century, but the population rose in the 1960s, when Jews fleeing the revolution arrived en masse from Cuba — among them Kress Levin, the Kleimans’ mother. There are now three main synagogues in San Juan, including Shaarei Tzedek, which Mendelbaum said has about 150 families — including the Kleimans and Berezdivins. Jewish families from the other synagogues, Reform and Orthodox congregations, are also among the missing, Mendelbaum said.

The Cuban émigrés grew roots in Puerto Rico. The Kress family built a chain of women and children’s clothing stores which dot the island. But Puerto Rican Jews often send their children to camp and college in the mainland United States. Jay Kleinman graduated from the University of Miami and Frank Kleinman from Drexel University. Berezdivin wrote that she was an “Aspiring Marketing Major and Art History Minor” at George Washington University on her LinkedIn profile.

Some eventually moved to South Florida, as Kress Levin did with her sons Jay and Frank in the 1980s. Jay Kleinman, as an adult, had a foot in Miami but made Puerto Rico his home.

Young Judaea, founded more than 100 years ago according to its website, has connected generations of Puerto Rican Jews to each other, to the Zionist movement and the Jewish diaspora. It also helped the Cuban Jewish community assimilate into Puerto Rican life.

“We at Camp Judaea are saddened and shocked by the devastating building collapse in Surfside,” the statement read. “To our extended Camp Judaea family, South Florida community, Puerto Rico community and all those affected, we are sending our heartfelt support and love during this painful and difficult time.”

Camp Judaea and Camp Tel Yehudah officials did not respond to interview requests.

Though neither Diego Mendelbaum nor his shul is directly associated with Young Judaea, a four-day winter camp he runs on the island attracts many of the Puerto Rico chapter’s members. He said he had met the Matz family through the mini-camp, but did not know them well.

But the Berezdivin family, he said, is responsible for his current position, spiritual leader of Shaarei Tzedek, a job he has held for the past 21 years.

Mendelbaum, who was born in Argentina, lived in Cuba for three years when he was working for the Joint Distribution Committee. He and his wife met Deborah Berezdivin’s grandparents while he was there, who told him they might need him someday in Puerto Rico.

“So basically the people who took me and my wife to Puerto Rico were Deborah’s grandparents,” Mendelbaum said.

He remembered Deborah as “a very happy girl, very active, smart,” who contributed significantly to the synagogue’s rescue efforts following Hurricane Maria, the storm that left much of the island without electricity for months in 2017.

“Jay and Frankie were my good friends,” he said, and very involved in the synagogue and in Young Judaea. “And Nancy, their mother. All of them, I loved them very much. It’s very difficult in both personal connection and in my professional capacity.”

Williamson had become friends with Berezdivin through chalutzim, a Young Judaea program for rising 10th graders.

“Her laugh really exuded warmth,” said Williamson from Israel. “She could light up a room.”

Williamson had served alongside Naibryf as a counselor, where the two bonded over their love for soccer.

Now she plays for the Emory University team, and when the team traveled to Chicago last year, she was touched when Naibryf, a University of Chicago student, showed up to her game.

“He was a kind soul,” Williamson said. “He really cared about other people.”

Though she didn’t talk to them every week, Williamson knew that as camp friends, they would always be able to catch up — maybe someday as parents, bringing campers to Camp Judaea for the first time.

She said she was struggling to process the loss, especially being so far away. Many of her Camp Judaea friends had flown to Miami to help comfort the Kleimans and Berezdivins.

“It kind of feels like our 9/11,” she said. “But being in the Judaean community, it’s amazing to see all the support.”

The Surfside disaster devastated the Young Judaea community, which lost several members in the collapsed tower