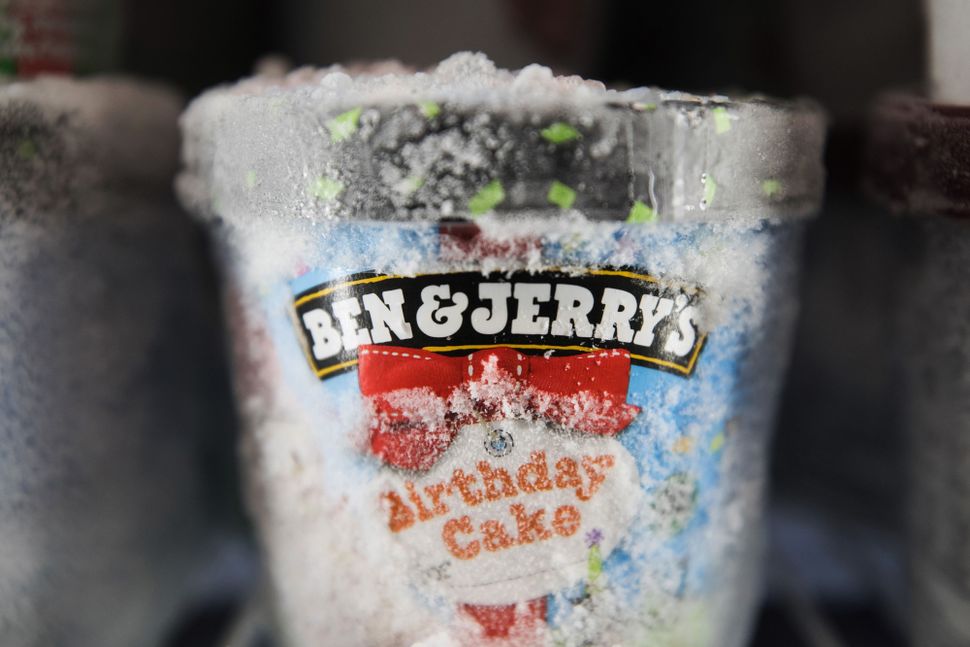 A tub of Ben and Jerry’s ice cream, manufactured by Unilever Plc, in a freezer at a Morrisons supermarket, operated by Wm Morrison Supermarkets Plc, in Saint Ives, U.K., on Wednesday, Aug. 19, 2020. Morrison shares rose after the U.K. grocer and Amazon.com Inc. said customers can now do their full Morrisons food shop on Amazon.co.uk. Photographer: Chris Ratcliffe/Bloomberg via Getty Images Photo by Getty Images

Ben & Jerry’s announcement Monday that it will end sales in the occupied West Bank may cause a pint of trouble for its parent company as it tests Americans laws intended to bar companies that boycott Israel from state government contracts and pension funds.

“Selective boycotts are just as illegal as total boycotts,” said Marc Stern, chief legal officer for the American Jewish Committee, which has lobbied for laws meant to stem the Boycott, Divestment and Sanctions movement aimed at Israel.

“You can’t have your ice cream and eat it too,” said J Street President Jeremy Ben-Ami.

The company’s decision is roiling Jewish Twitter, pro-Israel supporters have inundated the company with demands to roll it back and several kosher markets in New York and elsewhere have decided to drop the product.

But Jeremy Ben Ami, president of the liberal pro-Israel group J Street, said critics are wrong to deem Ben & Jerry’s move as a boycott of Israel because the settlements are not an internationally recognized part of Israel, and that calling for economic equality without political equality is an untenable position for the Jewish establishment and pro-Israel organizations to hold.

“Either this is all part of Israel, in which case everybody who lives in the occupied territory should have equal rights, or there’s a distinction,” Ben-Ami said. “You can’t have your ice cream and eat it too.”

Ben & Jerry’s will end sales of our ice cream in the Occupied Palestinian Territory. Read our full statement: https://t.co/2mGWYGN4GA pic.twitter.com/kFeu7aXOf3

Stern said several states — including New York, New Jersey and Illinois — go farther than the rest, with laws that ban state agencies from contracting with companies that refuse to do business with Israel or with “territories controlled by Israel,” or prohibit public pension funds from investing in them.

If those laws are applied in the case of Ben & Jerry’s, it could have repercussions far beyond whether or not workers are able to dig into a bowl of Cherry Garcia at state cafeterias in Albany. The Vermont company is owned by Unilever, a multinational company based in London with $50 billion in revenue from sales of products like Hellman’s mayonnaise, Lipton tea and Dove personal care products.

Gilad Erdan, the Israeli ambassador to the United States, wrote a letter to governors in the 35 states that have passed some form of anti-boycott legislation, saying that “rapid and determined action must be taken to counter such discriminatory and antisemitic actions.”

But critics chafed at the notion that a boycott of Israeli settlements in the West Bank, which are widely considered illegal under international law, was equivalent to participating in the BDS movement, which effectively calls for end to Israel’s status as a Jewish state.

Ben & Jerry’s announcement that it would not renew its license with an Israeli company that manufacturers and distributes its products in the West Bank also stated that it would maintain its presence in Israel “through a different arrangement,” a line that was apparently inserted by Unilever without consulting Ben & Jerry’s independent board of directors.

Over 30 states in the United States have passed anti-BDS legislation in recent years. I plan on asking each of them to enforce these laws against Ben & Jerry’s. They will not treat the State of Israel like this without a response.

Meera Shah, a senior staff attorney at Palestine Legal, said that details of laws meant to crackdown on the BDS movement was less important than their goal of cracking down on activism aimed at Israel. Palestine Legal, an American nonprofit, tracks and opposes anti-BDS laws.

“Israel and its allies use anti-boycott laws to smear Palestine advocacy regardless of the actual provisions, applicability, or constitutionality of the laws—or the focus of the activism,” Shah wrote in an email. “Going after an ice cream company for supporting Palestinian rights exposes how desperate Israel and its allies are to avoid accountability for human rights abuses.”

The question of whether companies — or artists, scholars and tourists — can distinguish between Israel and the territory it controls in the West Bank goes to the heart of recent debates over Israel’s status as a democracy. Over the past year, human rights organizations have increasingly sought to treat Israel, the West Bank and Gaza as a single entity under the control of the Israeli government, with several groups leveling claims of apartheid because Palestinians in the occupied territories do not have citizenship.

A recent poll showed that 25% of American Jews agreed with the statement that “Israel is an apartheid state.”

Israel’s supporters counter that both Jews and non-Jews have equal rights in Israel and that the West Bank and Gaza should be viewed as separate regions. But for the purposes of economic activity, such distinctions blur.

“We’d want to see when it comes to economics that Arabs and Jews, whether they are in the West Bank — Judea and Samaria — or in the entirety of Israel, they are treated the same in the economic sphere,” said Michael Dickson, Israel director of StandWithUs, which said more than 10,000 of its supporters had emailed Ben & Jerry’s Tuesday calling on it to reverse its decision.

While Ben & Jerry’s said it would end sales in all of the West Bank — not only in Jewish settlements — Stern, with the American Jewish Committee, said the problem was that it was a strategy intended to place blame on a single party to the conflict. While Palestinians in Ramallah might not be able to purchase the ice cream, Israel would bear the financial toll of the decision.

“This is designed to bring economic pressure on Israel,” Stern said. “The Palestinians are roadkill.”

There have been a handful of lawsuits related to anti-BDS laws in states like Arkansas, where the law was curtailed, and Arizona, where a similar measure was upheld.

The last high-profile case of an American company deciding to end its operations in the West Bank came in 2018, when the travel rental platform Airbnb decided to remove listings in Israeli settlements. The company ultimately reversed the ban but said it would donate proceeds from rentals in the West Bank to humanitarian organizations.