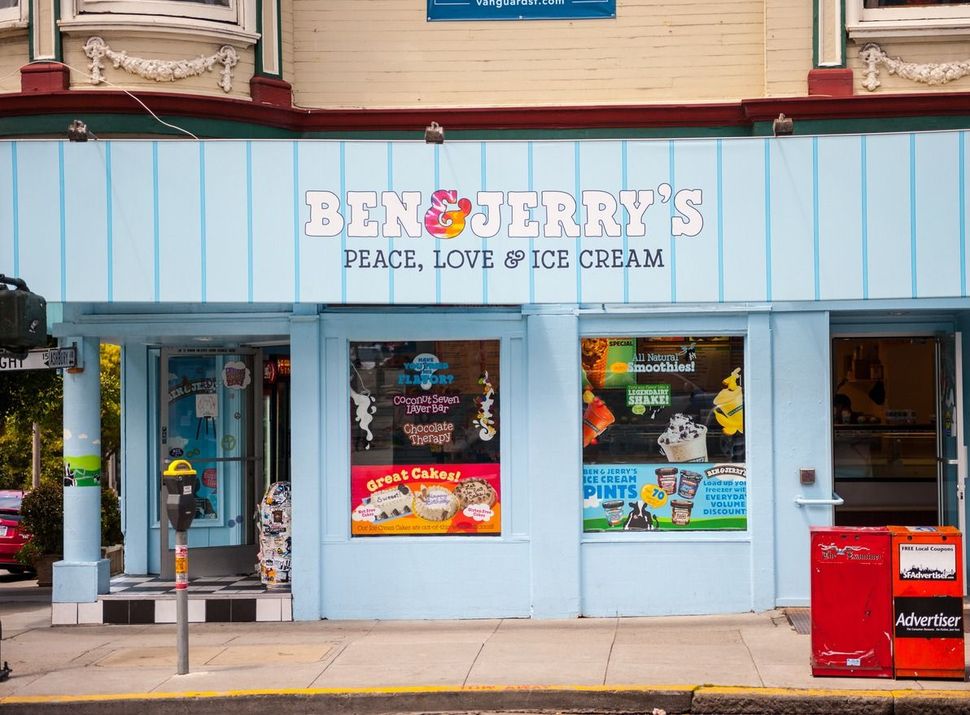 Israeli president Isaac Herzog referred to the departure of Cherry Garcia from settlements (Ben & Jerry’s will continue to operate inside Israel’s borders) as “a new kind of terrorism.”

Oklahoma Sen. James Lankford called for a ban on the sale of Ben & Jerry’s products. (Even under the state’s current anti-BDS law, which prohibits the government from contracting with entities that boycott Israel, a blanket ban would not likely be legal.)

Many, many people tweeted undying loyalty to Haagen-Dazs, whose founders fervently supported the settler movement.

While Ben & Jerry’s is one of just a few companies to cease operations in the West Bank (Airbnb announced a similar decision in 2018, then backtracked), there’s a long history of ice cream brands engaging in activism — and serving as flashpoints in political conflicts.

Ben & Jerry’s, which is owned by the food giant Unilever, is one of the most publicly political ice cream brands around. The company boasts its own activism strategy team. Its website features statements on issues from voting rights to campaign finance reform and climate justice. On Twitter, the brand’s pinned tweet is a denunciation of the Jan. 6 attack on the Capitol.

Because of the company’s unabashedly activist posture in the past, it was all the more noticeable when Ben & Jerry’s declined to weigh in on the most recent conflagration in Gaza and Israel. An ill-timed tweet on May 18 asking if there were “any mint lovers out there” yielded a flood of comments demanding that the company cease doing business in West Bank settlements or pull out of the Israeli market altogether.

For the next two months, as protesters continued to demand change, Ben & Jerry’s stayed silent altogether. When the company reappeared on Twitter Monday, it was to announce an end to distributions of its product in the West Bank.

Is Ben & Jerry’s the only activist ice cream brand?

No — and its peers span the political spectrum. One unexpected foil to Ben & Jerry’s is Haagen-Dazs, whose Jewish founders, Reuben and Rose Mattus, were ardent supporters of Israeli settlements. In an obituary for Ruth Mattus published in the Forward, Zionist Organization of American president Mort Klein described her as “a very generous contributor to Jews living in Judea and Samaria,” using the Biblical names for the areas that comprise the West Bank. The couple, who no longer own Haagen-Dazs, also donated to the Jewish Defense League, a militant organization whose disciples included mass murderer Baruch Goldstein.

Then there’s Star Spangled Ice Cream, a short-lived brand launched as a conservative alternative to Ben & Jerry’s. The brand, which is now defunct, boasted flavors that ranged from semi-successfully punny (“Cherry Falwell” and “Nutty Environmentalist”) to overtly xenophobic (“Iraqi Road” and “I Hate the French Vanilla.”)

Have ice cream brands faced calls for boycott over political statements before?

This certainly isn’t Ben & Jerrys’ first rodeo. In 2014, the company teamed up with the World Wide Foundation to campaign against a proposed Australian dredging project that threatened the Great Barrier Reef. Traveling across the country via ice cream truck, employees handed out free scoops while raising public awareness about the project.

Local politicians did not take kindly to the initiative. “Another company has signed up to the campaign of lies and deceit that’s been propagated by WWF,” environment minister Andrew Powell told reporters at the time, encouraging Australians to boycott Ben & Jerry’s. (The Australian government eventually banned the dumping of waste near the reef.)

Closer to home, Oberweis Dairy, a popular regional ice cream brand based in Illinois, has faced boycotts more than once. After owner Jim Oberweis mounted multiple unsuccessful bids for public office (doling out free ice cream on the campaign trail), local LGBTQ groups incensed by his opposition to same-sex marriage and adoption called for consumers to boycott the brand. One competing ice cream parlor even attributed its initial success to outrage over Oberweis’s policies. In 2020, during a yet another campaign against Democratic U.S. Rep. Lauren Underwood, Oberweis ran ads that some observers contained racist dogwhistles, causing renewed calls for boycott. “I’m boycotting Oberweis because racism-flavored ice cream sucks,” tweeted Mark Jacob, a former editor of the Chicago Tribune.

I used to like Oberweis ice cream until I saw Jim Oberweis’ patently racist ads in his bid for Congress in the Chicago suburbs. Now I’m boycotting Oberweis because racism-flavored ice cream sucks.

Have ice cream companies called for boycotts over other issues?

In 2018, Jeni’s Splendid Ice Creams, an upmarket brand known for farmer’s-market flavors like “Savannah Buttermint” and “Wildberry Lavender,” threatened to boycott FedEx over its policy of giving special deals to members of the National Rifle Association. (If you’ve ever forked over funds for a Jeni’s delivery, you’ll know they give the shipping giant a lot of business.) “Drop your support of the NRA or we will be looking at other options,” said Jeni Britton Bauer, the brand’s eponymous founder, in a widely-viewed Instagram video. (FedEx terminated its relationship with the NRA shortly after the Pittsburgh synagogue shooting, but said the timing was a coincidence.)

The Ben & Jerry’s decision has unleashed a storm of punditry that shows no signs of dying down soon. But there’s one thing no one can claim — that mixing ice cream and politics is anything new.