Minneapolis’ Jewish mayor: ‘It is not going back to normal’ 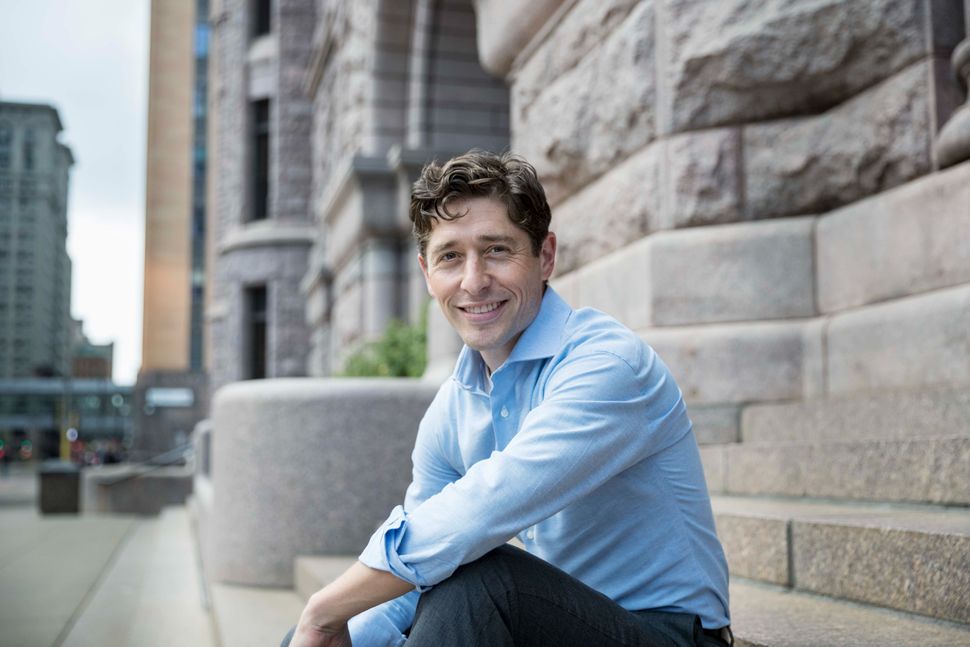 Jacob Frey turns 40 today. If that sounds like a milestone, it’s nothing compared to being a double chai when he was elected one of Minneapolis’ youngest mayors ever just shy of four years ago. And it completely pales in comparison to 2020, when the murder of George Floyd thrust the city and its young leader into the international spotlight.

Wavy-haired and affable, Frey could be the grandson of any bubbe and zayde. He grew up the son of professional modern ballet dancers in the suburbs of Washington, D.C. After graduating law school and settling in at a big firm in the Twin Cities, he entered politics. His adopted city — once known more for musical icon Prince and having the largest number of theater seats per capita outside of New York City — is now ground zero for a worldwide racial reckoning.

Guiding him through that adversity, Frey says, is his faith, both from his Judaism and, as of late, from clergy in the Black community. He also draws strength from his wife of five years, Sarah Clarke; his second marriage. A marathoner who finished fourth for Team USA in the 2007 Pan American Games, Frey is in the political race for the long run, intending to file for re-election by next month’s deadline.

“I don’t take the easy way out,” Frey told WCCO-TV as he was celebrating his first Father’s Day as a dad. He may have a plan to get this city back on its feet, but not everyone is going to agree with how. A recent controversy was his decision to bypass the city council to reopen to traffic the intersection of 38th and Chicago, declared in 2020 as George Floyd Square. Frey said the corner where Floyd was killed “should be both a permanent memorial to George Floyd and everything that he stood for in his life, but also an intersection where racial healing and justice is front and center.”

And, a place where businesses can safely reopen, he added — yet further qualifies, saying: “It is not going back to normal.”

What does normal look like these days for Jacob Frey? In an exclusive interview with the Forward, he shared his thoughts with longtime Minneapolis-based journalist Sheree R. Curry.

How does your Judaism guide you?

I grew up very culturally Jewish. Bagels and lox on Sunday were far more critical than even a belief in God. My family, from Mother’s side anyway, they are all New York, Queens Jews and there is a culture in and of itself of a Queens Jew. Both the culture and the ethnicity and the pride in that culture and ethnicity is something I’ve always held very dear.

But the religious aspects and the belief systems themselves is something that I’ve leaned into more during this last year and a half than I have in quite some time. Part of that is everything we are going through and a yearning for that sense of deeper meaning and stability. A rock to lean on.

We belong to two synagogues: Temple Israel and Shir Tikvah. My wife converted a year and half ago. She did this on her own. No urging on my part at all. She wanted to convert before we had our daughter [Frida]. Honestly, I couldn’t care less. My mother is thrilled though. My wife, she’s been attending Zoom temple with Temple Israel.

From the controversy over George Floyd Square, the Chauvin Trial, the pandemic, how do you tackle all these issues and stay sane?

This hundred years in the making, reckoning around racial justice, a global pandemic, an economic downturn and a city budget crisis, all of these issues have been stacked on top of one another in a way that exposes the fault lines that already existed in our society.

I get tremendous support from the backbone of my life, my wife Sarah. She’s got a backbone of steel. And having that love and care and strength [keeps me sane]. There certainly were times where she is picking me up and putting me back together every night, so that I can go out and fight for justice and stability every day.

The city of Minneapolis is in the news because of violence, from excessive use of force by police to the uptick in gun violence, rather than picturesque sights and sounds of travel agency brochures and the tourism marketing. How does your faith play a part in getting the city back on track?

There is a deep connectivity through faith, and that’s regardless of belief. Faith is tied so intrinsically to culture and provides a semblance of connection even where one seemingly doesn’t exist.

I have spent more time in Black churches working directly with pastors over this past year than I have spent in any synagogue. I’ve joked that Shiloh Temple [a Christian ministry] over on the North Side is my other temple. I am there every other week. It provides a good touch point with the community, our Black community.

I remember one time I was over there on the North Side when we were dealing with a major uptick in gun violence and I was listening to these beautiful orators and Black preachers make these impassioned calls for peace. I was also inspired by their connection to the Bible itself, and I remember talking with one of them and I was sharing with them my sense of faith and this call to action and they said ‘why don’t you include that in your remarks?’ And the [Jewish] call to action that is similar to the call to prayer is the Barchu. So to a full room, a packed church of people who weren’t Jewish, I belted out the Barchu as a call to action, a call for peace. So, I felt a very deep connection with the Black community over this last year. And obviously they are experiencing all this trauma in a fashion far more than anyone else.

You recently revealed a plan for spending $271 million in federal emergency money on the city from the America Rescue Plan. With all the racial inequities from education and wealth gap to health disparities and given you gave birth to a daughter, Frida, during the pandemic, right before Rosh Hashanah last year, did her birth change your perception on how you view health issues and racial disparities?

I think having a kid always dramatically changes your perception and that shift is even more heightened during a time of crisis like this last year. I know full well that Frida grows up in a sense of privilege that so many in our Black community do not experience — and that is something that I think about often.

How did you decide on the name Frida for your daughter? Is she named for someone in your family?

We have since found out that there was another Frida in our family, but I can’t say she was named after them. For one, Sarah liked the alliteration with Frida Frey, although she insists that she was not named after [artist] Frida Kahlo. Sarah is a big Frida Kahlo fan.

Minnesota has been referred to as one of the best places to live, but for whites, not Blacks. Minnesota Gov. Tim Walz has stated this on several occasions and has vowed to change that so that it’s the “best place ever” for everyone regardless of race. What’s your view as it relates to Minneapolis?

Society needs to learn to live in a duality or in a reality where there are multiple truths. Minneapolis is an extraordinary city and we have deep shortcomings. We have deep disparities that we not just need to acknowledge but we need to see aggressive policy action on. We are the city where George Floyd was murdered and we also aim to be the city that took serious action to make sure the precision of our solution matched the precision of the harm that was initially inflicted.

And we take that work extremely seriously and we hope to be an example for others to follow. The work is hard. And it’s going to take a whole lot more than a magic wand.

Sheree R. Curry is a freelance journalist living in suburban Minneapolis. Follow her on Twitter @ShereeCurry or find her on LinkedIn.

Minneapolis’ Jewish mayor: ‘It is not going back to normal’