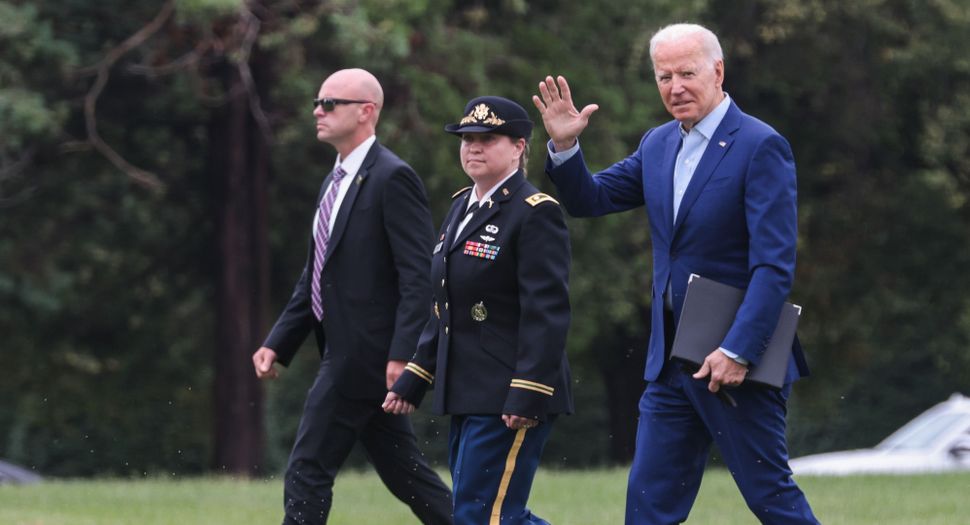 President Joe Biden sought to assure the American people on Monday that he made the right decision to withdraw from war-torn Afghanistan after 20 years, despite the rapid Taliban takeover. But as the worrisome images of the way Americans were evacuated from Kabul circulated on social media, criticism of the administration’s approach and execution intensified. Some, including Democrats, blasted Biden’s handling of the situation, which is being described as a crucial test of his tenure as Commander-in-chief.

Others raised questions about the administration’s credibility as a reliable partner in the region, about the willingness to maintain its commitment to long-standing allies, and the message this sends to other global terror groups.

Allies “want to know if the United States is going to continue to be reliable,” said Dov Zakheim, a former Pentagon official in the Ronald Regan and George W. Bush administrations. The Biden administration will seek to demonstrate that Afghanistan was not a national security priority for the U.S. and that alliances with Europe, Asia, Israel and other countries in the Middle East are an interest. “Whether people will be reassured is another matter,” said Zakheim, who wrote a book about the Bush administration mismanaging the reconstruction of Afghanistan.

The concerns have been building up in recent years about what role the U.S. wants to play in the Middle East and whether any decisions made would be reversed by the next administration.

“Nobody is going to challenge Biden’s sincerity,” Zakheim explained. “But for our friends and allies, they’ve been watching Donald Trump’s behavior, and they’re wondering whether there’s something about the United States that has changed, not about individual presidents.”

The message it sends on Iran

Aaron David Miller, a senior fellow at the Carnegie Endowment for International Peace, maintained that while Afghanistan has tarnished America’s image, it wouldn’t necessarily have an impact on the nuclear talks with Iran in the coming weeks.

“The problems of the JCPOA — the politics, the security implications, and the time factor — have all been baked into the cake long before these events of the past week,” Miller said referring to the Iran nuclear deal brokered by President Obama in 2015. “You’d have to persuade me that somehow what’s happened in Afghanistan has injected some new factor that has either strengthened Iran’s hand in negotiations because they perceive America as weak or, alternatively, has weakened Biden in some fashion that he can’t appear to be making concessions to President Ebrahim Raisi.”

A former Trump administration official, however, suggested Biden’s approach may remove a U.S. military option off the table. “I think one key effect will be in strengthening the Israeli conclusion that they may have to deal with Iran themselves,” said Elliott Abrams, a veteran Republican foreign policy official who previously served as Trump’s special envoy on Iran.

Moshe Ya’alon, former Israeli defense minister, echoed that sentiment, suggesting that the disengagement will implicate the United States’ position in the Middle East at the expense of Israel’s security. Quoting passages from the Talmud, Ya’alon tweeted, “Israel should strive for ‘the righteous — their work will be done through others,’ but must prepare for ‘If I am not for myself, then who will be for me?’”

How it will impact the Israeli-Palestinian conflict

The one area where the Afghanistan withdrawal might have a profound impact on is with regards to the Israeli-Palestinian conflict, an issue the Biden administration is committed to resolving by diplomatic means.

“It seems certain that, compounded by a long-held perception that the U.S. is in retreat from the region, and in the face of active security concerns about Hamas, Hezbollah, and the influence and impact of actors further afield, Israel and some of its regional allies will have little appetite for robust diplomatic pursuits that could point the way toward security or territorial compromise,” said Lucy Kurtzer-Ellenbogen, director of the Israeli-Palestinian conflict program at the U.S. Institute of Peace.

Zakheim, who was a Never-Trumper and supported Biden in 2020, said that Israel already started hedging during the Trump presidency because of his determination to withdraw U.S. troops from Syria. “This will simply reinforce the concerns, at least in some parts of the Israeli establishment, that at the end of the day, there are limits to how much support the United States will give.”