Exactly 20 years after 9/11, the memorial at ground zero in Manhattan was a mix of blase tourists, mourners and conspiracy theorists 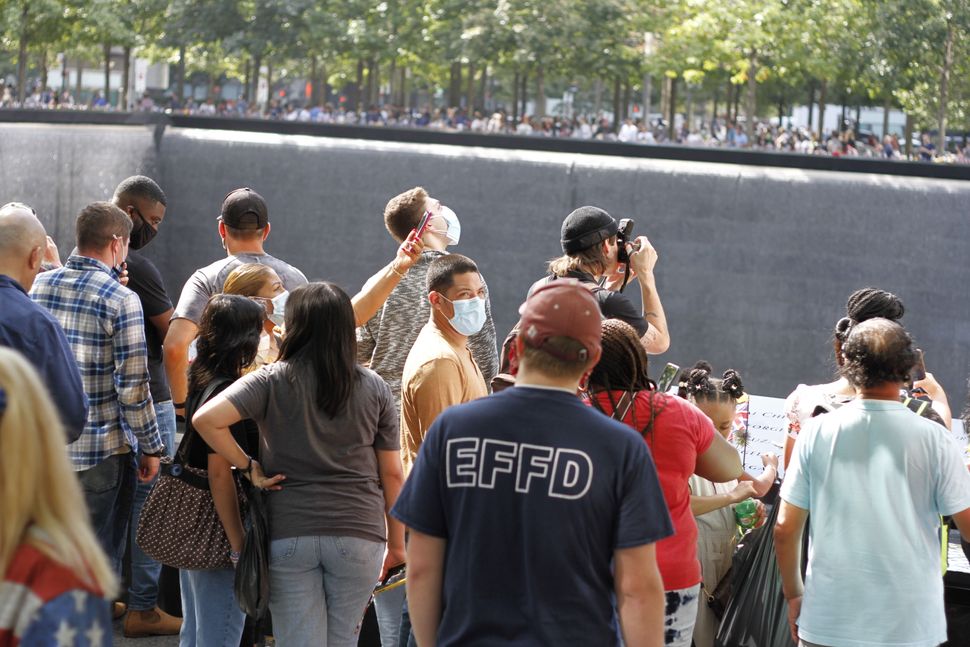 The crowd around one of the memorial fountain. Image by Leonardo Vasconcelos-O’Neill

When the Twin Towers fell, the nation was united, transfixed by our televisions and the overwhelming horror of terrorist attacks of an unheard of scale on our soil.

But 20 years later, at the 9/11 memorial at ground zero, the shock had worn off. Interpretations of what happened that day, and what it meant, had splintered. Mourners mixed with tourists, and conspiracy theorists shouted on one side of the street while a brigade of firefighters passed by on the other.

When approaching the memorial, it was hard to tell that this was a particularly significant day. Even just a few blocks away, life was going on as usual in lower Manhattan. The mall now standing near the World Trade Center site was full of shoppers and guests grabbing lunch at Eataly, all seemingly oblivious to the somber occasion being observed just steps away. 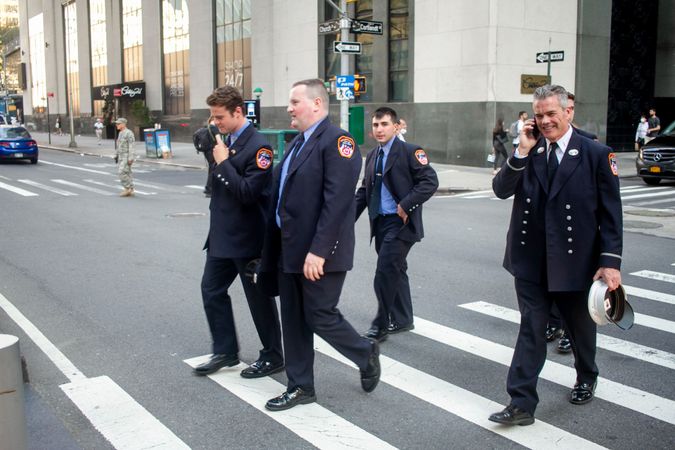 Firefighters in dress uniform cross the street near the memorial. Image by Leonardo Vasconcelos-O'Neill

But at the edge of the 9/11 memorial, a small crowd of tourists gathered, waiting for the site to open to the public after a closed ceremony for the families of the fallen. Once the area opened, a throng quickly gathered around the edge of the two reflecting pools that mark the site of each tower, where roses and flags adorned the engraved names of the fallen.

Wandering slowly around the site was Avi Golden, who wore a crocheted kippah and a shirt emblazoned with the names of friends he lost to the attacks. He was a paramedic working close to the Twin Towers 20 years ago; many people he was close to were killed. An observant Jew, Golden, who lives in Queens, got a hotel near the memorial so that he would be able to walk over and mark the anniversary of their deaths, which fell on Shabbat this year.

Being able to mark the anniversary in person at the memorial was deeply important, he said, and, despite the many tourists taking selfies, profoundly meaningful. 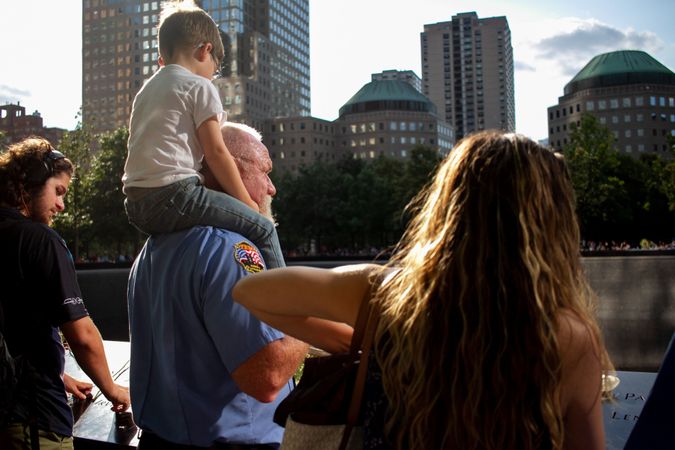 A family looks out over the fountains that mark the spots of the Twin Towers. By Leonardo Vasconcelos-O'Neill

Nathan and Ariel Lerman and their friend Ittai Stern also made the trek by foot, walking to the memorial with around 30 people from the Downtown Minyan, where they had attended services and eaten lunch that morning. They were led by Rabbi Yehuda Sarna, University Chaplain at New York University and Chief Rabbi of the United Arab Emirates, who guided the group around while sharing his memories and reflections from 9/11.

Sarna, then a rabbinical student at Yeshiva University, had come to ground zero the day after the attacks with his mentor, Rabbi Avi Weiss, to help out in the aftermath, handing out water and food to emergency workers and offering whatever solace they could. 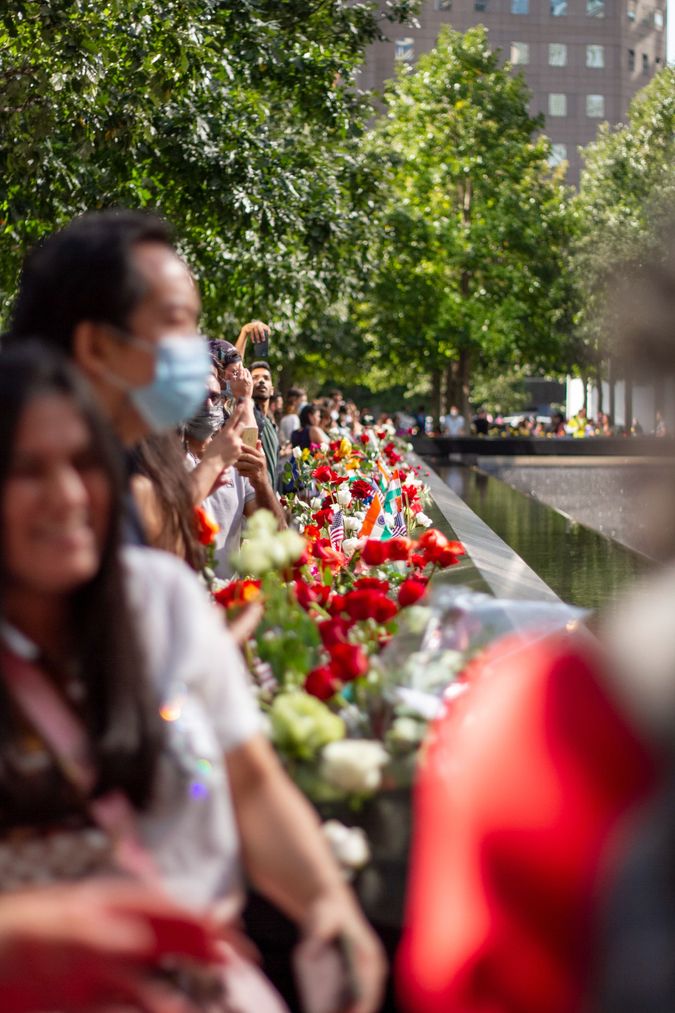 Flowers adorned the names of the fallen engraved on the fountains; many a selfie was taken. Image by Leonardo Vasconcelos-O'Neill

But many visitors to the site of the Twin Towers on Saturday had no personal connections to the event. A group of four Israeli women said they were in New York on vacation, having just finished their army service. They called the memorial “amazing” and their visit “very meaningful,” but said they had no personal connections to the event — unsurprising, given that all four women were 22, and would have been toddlers when the attacks occurred.

Tourism was clearly a big draw to the event. Nearby kiosks were doing brisk business, selling official 20th anniversary challenge coins, folded flags and other mementos and tchotchkes. Aside from the brigades of fire fighters in their dress uniforms, most attendees were dressed casually in shorts or sneakers, and the atmosphere was more relaxed and convivial than somber. 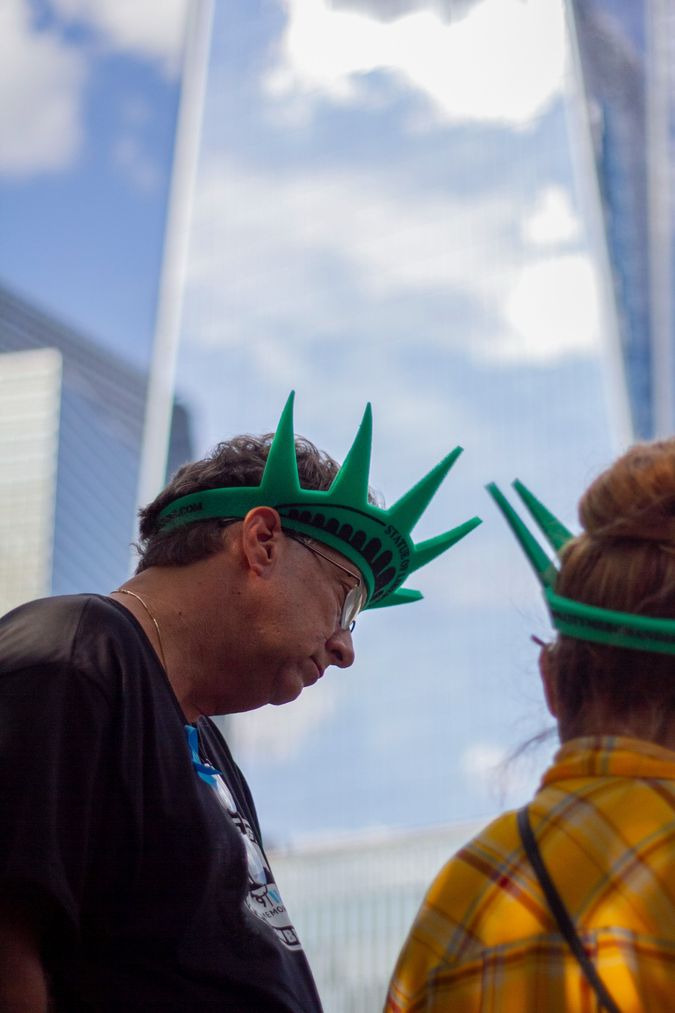 Tourists at the 9/11 memorial By Leonardo Vasconcelos-O'Neill

But there were a few exceptions to the easygoing tenor of the day. The 9/11 attacks have long been the subject of conspiracy theories, and the 20th anniversary crowds seemed to mark a ripe target for groups espousing various falsehoods about the attacks.

Stephen Russell, a former marine visiting from Denver to honor his fallen comrades, said he encountered a group of about five people outside the memorial, set up at the temporary fence, who accused Jews of perpetrating the 9/11 attacks. The group was using the antisemitic slur “kike” and handing out flyers and engaging passers-by in conversation to share the conspiracy theory.

Russell argued with the group until they moved farther away from the memorial, about a block up the street. “I don’t care what you think about 9/11, but today ain’t the day to point fingers,” he said, adding that he was impressed with his own restraint in the altercation. 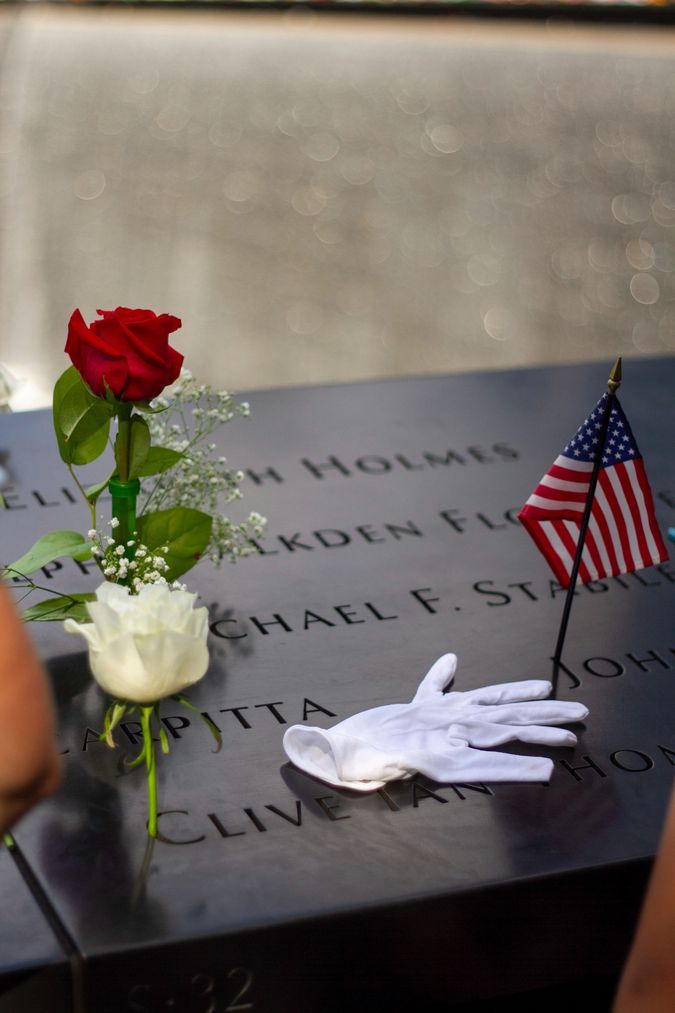 Flowers, a glove, and a flag adorn the names of the fallen. Image by Leonardo Vasconcelos-O'Neill

A group of people identifying as Black Hebrew Israelites set up at the memorial’s entrance later in the afternoon. Several of them wore necklaces adorned with large bedazzled menorahs, and one boasted a sweatshirt reading “THE REAL JEWS ARE BLACK.” They blew a shofar before launching into a lengthy speech blaming 9/11 on the government.

A spokesperson for the group at the site also made the false claim that “300-400 white, so-called Jews” got emails the day before the attack, warning them not to come into work the next day. He contended that this was proof that Jews were part of the conspiracy behind the 9/11 attacks.

Although the protesters identified themselves as Black Hebrew Israelites, Capers Funnye, the chief rabbi of the International Israelite Board of Rabbis, said they were in no way affiliated with his member congregations. “These individuals identify themselves as Hebrew Israelites, but we have no control over how people self-identify,” said Funnye, of Chicago’s Beth Shalom B’nai Zaken Ethiopian Hebrew Congregation. “I can tell you absolutely unequivocally that there is no connection to any group that is a part of the Israelite Board of Rabbis.” He also questioned the legitimacy of any group purporting to be practicing Judaism that would have gathered for a protest today. “This is Shabbat Shuvah. I don’t even get it. I know my people were in service.”

Thankfully, the conspiracy theorists were far outnumbered. Even so, in the wake of the United States’ recent military withdrawal from Afghanistan, their presence served as a reminder that in the 20 years since the 9/11 attacks, the unity the tragedy briefly seemed to create is disintegrating.

But for now, 20 years after the disaster, New York City still came together at the site of ground zero to mark the occasion, each in their own way.