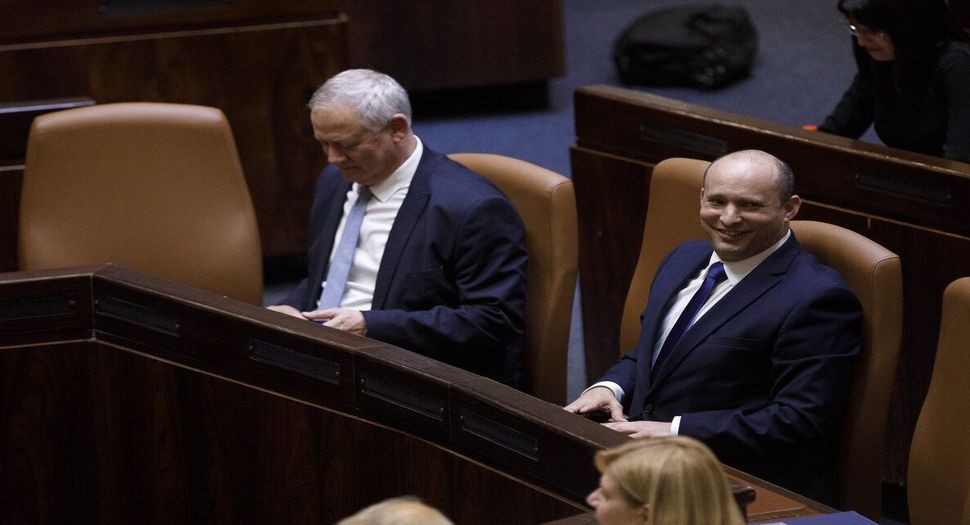 Israel’s new government turns 100 days old on Monday, a milestone many thought unreachable. Agreeing on little else besides the necessity of removing former Prime Minister Benjamin Netanyahu from power, the coalition — marked by inexperience and conflicting ideologies — seemed doomed to fail. At the outset, its partners had stated the coalition’s unwillingness and inability to tackle critical issues, like the conflict between Israelis and Palestinians.

But the spirit of cooperation is holding. The question is, for how long?

In more than a dozen interviews the Forward conducted in Israel recently, top Israeli politicians, commentators and former government officials assessed the coalition’s strength, its chances of completing — and perhaps even outlasting — its four-year term, and the prospect of a Netanyahu comeback.

The new government draws strength from the fact that so many Israelis were tired of the old one.

Netanyahu’s tough, divisive approach to governing and politicking finally, after a total of 15 years in office, convinced Israeli voters to seek an alternative, says Alon Pinkus, a former consul general of Israel in New York and a political commentator. “He was undone by his own skill,” Pinkus said. “He just lied too much.”

Thus, the new coalition’s promise to usher in a new era of compromise and reconciliation was welcomed by most Israelis, despite the disparate views of its members.

Describing how he felt as the new government was sworn in and Netanyahu was demoted to opposition leader, Alan Abbey, a research fellow at the Shalom Hartman Institute in Jerusalem, said, “Ah, I can breathe a little bit.”

The leaders of the government — Prime Minister Naftali Bennett and Foreign Minister Yair Lapid — had originally agreed not to tackle issues that could highlight differences and lead to stagnation, but to focus on COVID-19 recovery and domestic reform. Unexpected challenges arose almost immediately. The resurgence of coronavirus cases in the form of the delta variant and tension on the border with Gaza forced the government to focus publicly on contentious issues. And a November 4 deadline to pass a biennial budget and prevent snap elections approaches.

“At the very least, there’s now a ray of sunshine,” said Abbey, a Brooklyn native who now lives in Jerusalem. “There’s some light at the end of the tunnel.”

Zahava Galon, a former member of the Knesset and the past chairwoman of the left-wing Meretz party, said that what she’s hearing from those on the center-left, whose party is part of a government led by a former settler leader with hardline views on the conflict, is that they are grateful for the new normality that now defines the political discourse.

Once the youngest member of Likud, Sharren Haskel echoed that sentiment. Now a member of the right-wing New Hope party, Haskel said that despite the challenges, the government she is part of “was a necessity for the citizens of Israel.”

Haskel said she paid a high price for it, giving up some of her core beliefs and ideology — she was one of the leading lawmakers to apply Israeli sovereignty over the Jewish settlements in the occupied West Bank — in exchange for an unknown future with the coalition. “But we needed a government in order to rehabilitate the country,” she said.

How long will it last?

The fate of the new government is not entirely in its own hands. Much depends on Netanyahu. In his first speech as opposition leader, Netanyahu proclaimed, “I will be back — soon.” In public appearances since, he has heavily criticized the government over its handling of COVID-19 and national security issues, and vowed to topple the new order as soon as possible.

But despite his experience and talent as a politician, time is not on Netanyahu’s side. If the government clears the hurdle of passing a budget in three readings — something even members of the opposition predict will happen — that will strengthen the coalition for the following eighteen months. 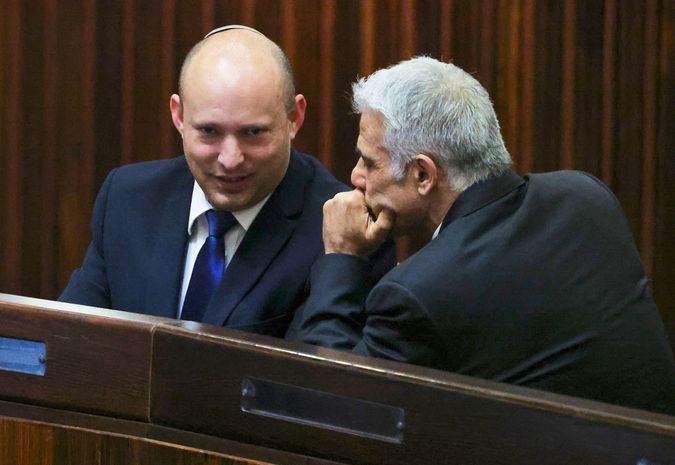 Many predict that the coalition will fall apart only if one of its member parties bolts or if Bennett refuses to honor the rotation agreement, which elevates Lapid to prime minister in the summer of 2023. And since the leaders of this government are mostly former cabinet ministers who have worked with Netanyahu and never want to again, as long as Netanyahu remains the alternative, “he’s the glue that keeps them together,” Pinkus said.

Avigdor Leiberman, the finance minister who was the first to bolt the national camp and denied Netanyahu a majority after the first 2019 election, told a religious news site recently that the moment Netanyahu steps aside all options are on the table.

Netanyahu — whose office declined to make him available for an interview — has so far resisted calls to retire. And despite growing signs of dissent in his Likud party, he remains popular with his base, leading recent polls as the preferred candidate for prime minister. 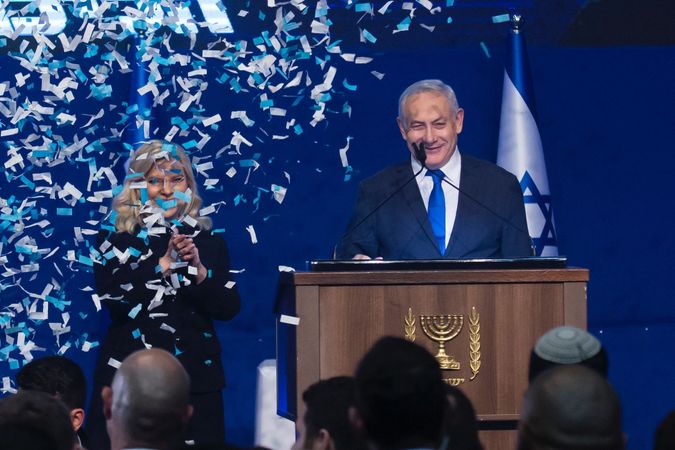 People familiar with Netanyahu’s thinking say he is convinced that he is the leader Israel needs at this time and won’t back down voluntarily.

While Netanyahu faces a corruption trial that could last several years, his standing with the Israeli public may still be strong enough to leverage in court — perhaps to improve the terms of a possible plea deal.

We have a tough road ahead of us, Netanyahu acknowledged in a recent Facebook Live broadcast, but the task is not impossible.

One of the people Netanyahu is hedging his bets on is Benny Gantz, his former partner and presently the defense minister. With his Blue and White party’s eight votes in a government that rules with a razor-thin majority, Gantz can topple the coalition by joining the 53 members of the opposition, excluding the Arab factions, in what is called a constructive vote of no confidence that would task him with forming a new government.

Despite reneging on their power-sharing deal that led to snap elections earlier this year, Netanyahu has kept lines of communication open with Gantz since the election, and has relentlessly pushed a coalition deal that would immediately make Gantz prime minister. 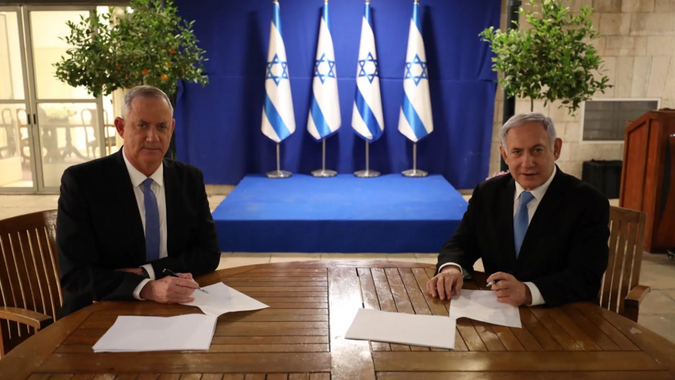 Miki Zohar, a member of the Likud party and an ally of Netanyahu, told the Forward that Netanyahu’s offer to Gantz is the only chance for his party to return to power in the coming years and Gantz’s only opportunity to ever become prime minister. Given his situation, “Netanyahu is the only person in the Likud that can offer him this position,” Zohar noted, because any other person succeeding Netanyahu would be able to form a government with the right-wing and religious parties that make up a majority in the 120-member Knesset.

Gantz has repeatedly rebuffed the offer, saying Netanyahu can’t be trusted and that he’s committed to the government. But he has never publicly dismissed the possibility for the future.

Danny Danon, chairman of the World Likud, who bills himself as a candidate for Likud leader after Netanyahu departs, doesn’t put much stock in that scenario. But he points to another critical test of the government, in the summer of 2023, when Bennett is required, according to the amendment passed in the Knesset, to hand the reins of power to Lapid.

At that juncture, in what Danon calls “the most realistic scenario,” Bennett or a few coalition defectors would introduce a bill to dissolve the Knesset, denying Lapid the premiership and giving Likud another shot at the ballot.

Another wild card is Gideon Sa’ar, who once challenged Netanyahu within Likud and then went on to found the New Hope party, a part of the coalition. Cautioning that the possibility is unlikely, one political observer suggested that if Bennett underperforms, Sa’ar could return to Likud as a hero who brought down the Bennett-Lapid government on ideological grounds. Why would he do it? Because he has nothing to lose and it could make him a competitor for leadership.

‘Trust’ is the word both Bennett and Lapid used to describe their alliance. While that trust could break down, it’s in Lapid’s interest to protect it, and to become prime minister on August 23, 2023. 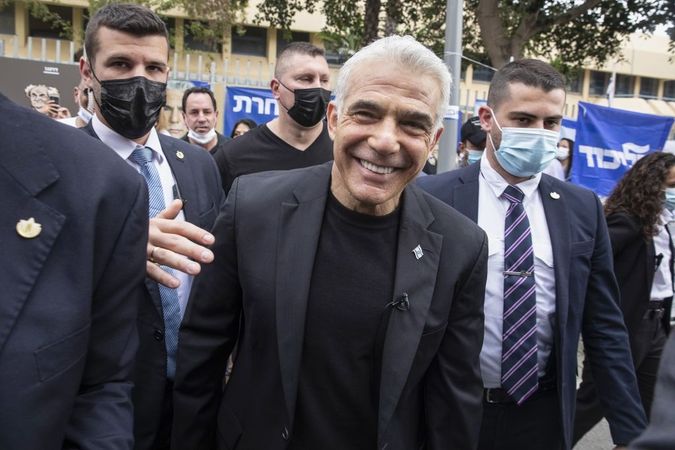 Yair Lapid on March 23, 2021 after casting his ballot in Tel Aviv. Courtesy of Getty Images

If that happens, Lapid to many will be the political genius who brought an end to the Netanyahu era and allowed the center-left camp to return to power after years in exile.

For the Biden administration and American Jews, the stability of the rotation government is also an opportunity for progress on the Israeli-Palestinian conflict once Lapid leads the government. Lapid has already said that he would seek to advance a two-state solution.

“They know who is waiting in the wings,” a former U.S. administration official remarked.