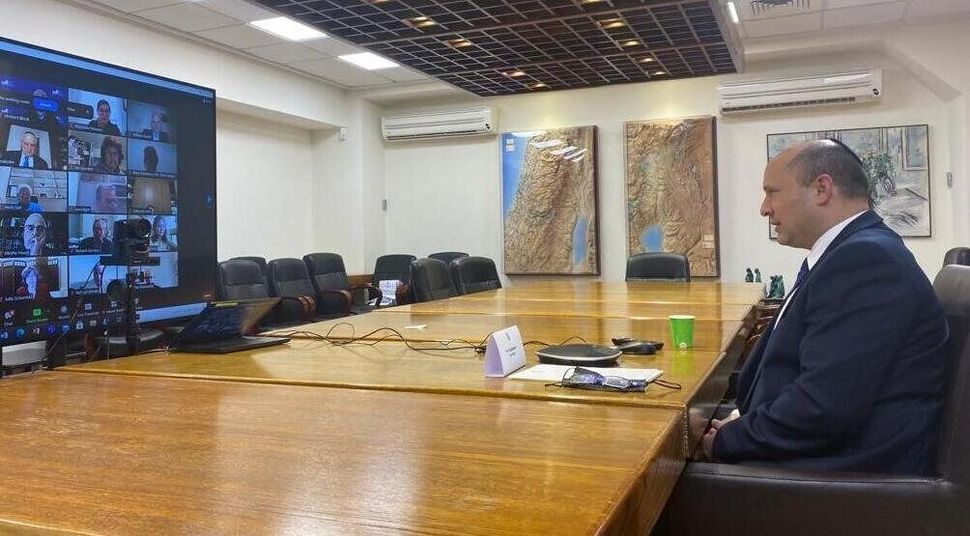 Israeli Prime Minister Naftali Bennett told Jewish American leaders on Friday that “restoring a good atmosphere” between the U.S. and Israel and strengthening bipartisan support for the Jewish state is one of the three main objectives of the new Israeli government. (The others are keeping the pandemic under control and brokering a budget deal.)

“My government is looking for no dramas,” Bennett said in a 30-minute Zoom call with top leaders of the Conference of Presidents of Major Jewish American Organizations, according to several participants who shared notes with the Forward. “I want to calm things down. That’s all Israel needs right now in order to grow and thrive — it is some peace and quiet.”

Bennett and his partner, Foreign Minister Yair Lapid, have made it clear that one of the key priorities of the new government is to restore ties with the Democratic Party and repair the relationship between Israel and American Jewry — alliances that deteriorated in the 12 years Benjamin Netanyahu was in power. Bennett called the formation of the government he is leading for the next two years — a coalition of diverse groups — an “accident.”

“But the accident is something I want to turn into a purpose,” he said. “And that purpose is showing how different people can work together. And the very good news is it’s actually working.”

The call took place a week after Bennett visited Washington to meet with President Joe Biden. Bennett didn’t meet with congressional leaders or Jewish groups due to COVID-19 restrictions and a tight schedule. His only publicly announced meeting other than his discussions with senior administration officials was with AIPAC’s chief executive Howard Kohr. After the meeting, the prime minister’s office released a statement that said Bennett told Kohr that he views AIPAC’s activity “as a leading and integral factor in strengthening Israel’s standing in the U.S.” 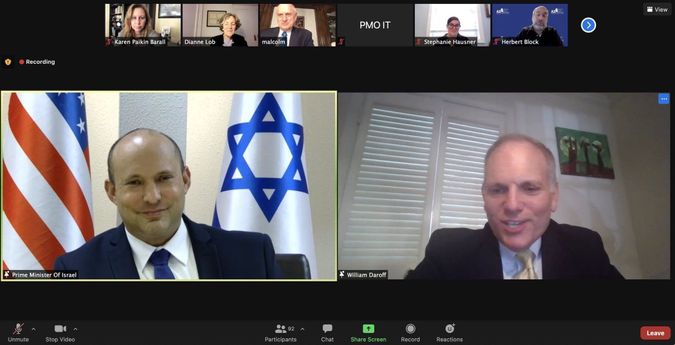 William Daroff, CEO of the conference of presidents, in coversation with Israeli Prime Minister Naftali Bennett on Zoom. Image by Screenshot

Bennett also told those on the call that the guiding principles established in his two-hour meeting with Biden was “to be mensches with each other” and “when there are things that we don’t necessarily agree, we’ll hash them out… to just dismantle issues as quietly as possible.”

Pointing to his long-held right-wing positions on the Israeli-Palestinian conflict, Bennett said that his goal as prime minister is to diffuse tensions. “I think everyone is cognizant that we are not looking at a political breakthrough in the near future,” he said. “What I don’t want is to create illusions of something that isn’t going to happen, and then the disappointment can create negative ramifications.”

While Bennett’s defense minister, Benny Gantz, recently met with Palestinian Authority President Mahmoud Abbas in Ramallah, Bennett said he won’t meet Abbas because the PA filed war crimes allegations against Israel at the International Criminal Court in Hague. “As someone who comes from the business world, when someone sues me, I’m not really that nice to him,” he explained.

Asked about the Kotel issue, Bennett indicated that once the Knesset approves his government’s biennial budget in November — a move that will stabilize the coalition for at least the coming two years — “that’s when we can start dealing with more complicated issues.”

“I love you guys,” Bennett concluded his call.

William Daroff, CEO of the conference of presidents, described the meeting as “an open and meaningful exchange of views,” and said that it also served as an opportunity “for the mutual exchange of holiday greetings and wishes for a productive, healthy, and peaceful new year.”

Also on Friday, Bennett met with a group of four Democratic senators — Richard Blumenthal and Chris Murphy of Connecticut, Chris Van Hollen of Maryland and Jon Ossoff, the Georgia freshman — in Tel Aviv. “The Prime Minister thanked them for their ongoing bipartisan support of the US-Israel relationship,” the prime minister’s office wrote on Bennett’s official Twitter account, but no photo was released.

Murphy tweeted later that ​​the members of Congress brought up the U.S. plan to reopen a consulate in Jerusalem to serve the Palestinians, a move the new government is publicly opposed to.