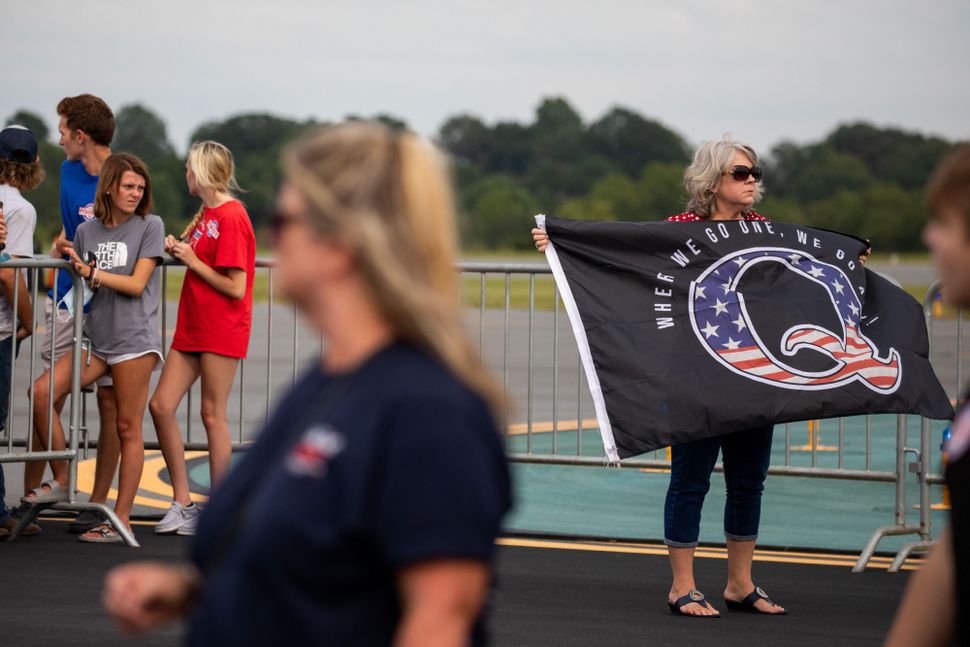 The shift is documented in a new report from the Anti-Defamation League in what it describes as one of the most comprehensive studies to date on the role of antisemitism in the sprawling QAnon conspiracy theory and social movement, which organized around the belief that the Democratic party is controlled by Satan-worshipping pedophiles.

The most explicit forms of antisemitism were largely kept at bay until this spring.

Antisemitism is hardly new to QAnon. It was incubated four years ago in online forums teeming with neo-Nazis who trafficked in antisemitic tropes, focusing on Jewish scapegoats like philanthropist George Soros and the Rothschild family. Rep. Marjorie Taylor Greene, a Georgia Republican who embraced QAnon during her campaign for Congress, made headlines early this year when it emerged that she had once posited that the Rothschilds had started California’s wildfires with a space laser.

But explicit forms of bigotry aimed at Jews were largely kept at bay until this spring, when many of the leading QAnon influencers were pushed off mainstream social media platforms, the ADL’s Center on Extremism found.

In 2018, at the height of QAnon’s activities, its large number of evangelical conservative followers — many of whom feel warmly toward Jews and supportive of Israel — meant the movement was then less hostile toward Jews, the report’s authors conclude.

But following the January 6 attack on the U.S. Capitol, which included rioters affiliated with QAnon, mainstream social media companies like Twitter banned most of the accounts promoting QAnon beliefs, driving them to smaller platforms like Telegram where more offensive content — including praise of Nazi leader Adolf Hitler, for example — is tolerated.

“That’s one of the tensions that exists in combating all kinds of hate,” said Aryeh Tuchman, associate director of the Center on Extremism. “It, ironically, retreats into those less regulated areas of the internet where it doesn’t need to temper itself to be socially acceptable.”

So while QAnon’s audience has shrunk, its anti-Jewish vitriol has spiked.

“There have been people who have said, ‘I’m out, this is obviously antisemitic — that’s not what I thought QAnon was about,” Tuchman said, “and you’ve had other people — the majority of people, apparently, who have thought, ‘No, this is OK.’”

The most popular account promoting QAnon on Telegram is GhostEzra, an anonymous user who has amassed a following of more than 300,000 people and began posting clearly antisemitic posts and images last spring.

“They try and make you feel guilty for being white because of all the Zionist programming,” GhostEzra wrote in one post cited in the ADL report. “From WWII to all the Spielberg propaganda movies. It’s all well planned. Racism is created by the Zionists.”

GhostEzra, who was identified last month by fact-checking website Logically as Robert Smart, a Florida entrepreneur, has also shared antisemitic memes promoting Holocaust denial and describing the “Synagogue of Satan.”

The report, “QAnon’s Antisemitism and What Comes Next,” was released Tuesday and shared in advance with the Forward.

GhostEzra’s started posting antisemitic content after he had amassed a large following, according to the ADL report, and some active in online QAnon communities have described unsubscribing from the account’s content after it started promoting Hitler and other anti-Jewish conspiracies.

Other influential accounts have also been reluctant to directly criticize GhostEzra’s antisemitic content, despite not engaging in it themselves. The ADL report cited Jordan Sather, an early QAnon influencer who has declined to call out antisemitism within the movement and CJTruth, another leader, who denounced “disinformation” generally but not specific posts targeting Jews.

Tuchman said some of the tension within the QAnon movement is due to Trump’s loss in January and Q, the anonymous leader of the movement, going silent in December. That has led to a dearth of new content to fuel the conspiracy and a desperate scramble by influencers to find new ways to attract and retain followers.

While few appear to have followed GhostEzra’s descent into antisemitism, Tuchman said he is worried the size and influence of GhostEzra’s account could catapult antisemitism into the QAnon cannon and effectively force other influencers to promote similar tropes.

“What becomes conventional wisdom on one channel,” he said, “may push other channels to take similar lines.”