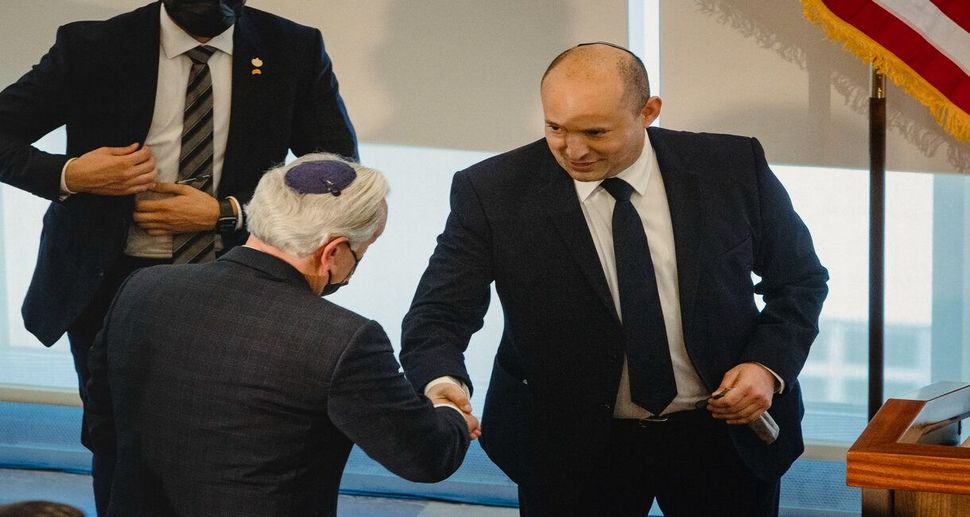 Israeli Prime Minister Naftali Bennett praised the American Jewish community Monday in an address to its leaders in New York. He admired its acceptance of denominations across the spectrum of Judaism. He extolled its support for Israel. And he stressed the need to strengthen the relationship between Israel and Jews in the diaspora.

The alliance had deteriorated under his predecessor, Benjamin Netanyahu, primarily due to partisan maneuvers and a lack of tolerance over marriage, conversion and religious practice.

But the new prime minister, who marked 100 days in office last week, offered no concrete plan as to how he would reset relations. Instead he highlighted the “goodwill and a bit of trust” that led to the formation of the most diverse government in Israel’s history as an amazing feat.

“I hadn’t planned in a million years to be in the government with the folks I am with,” he said, as he detailed the events that led to the end of two-year political deadlock. “I never thought it would work, let alone be the prime minister. But it’s working. It is a spirit of working together. And I think it’s beautiful.” 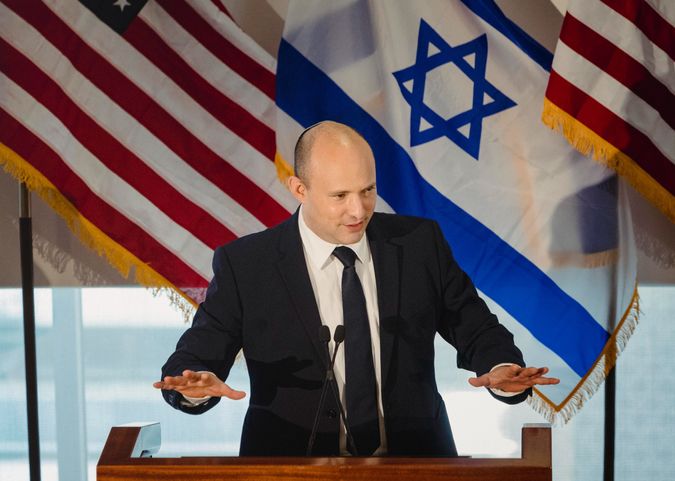 Prime Minister Naftali Bennett speaking to Jewish leaders at an event hosted by the Jewish Federations of North America in New York on September 27, 2021

Bennett has hammered this theme since he came to the U.S. to meet with President Joe Biden last month and in his outreach to the leaders of the Democratic party, as well as Jewish leaders.

Addressing the United Nations General Assembly earlier on Monday, Bennett said the purpose of the new government was to promote unity in a polarized society despite disagreements. “Today, we sit together, around one table,” he said. “We speak to each other with respect, we act with decency, and we carry a message: Things can be different.”

His address to Jewish leaders, hosted by the Jewish Federations of North America at the Safra Center in the Upper East Side, was Bennett’s first in-person interaction with representatives of Jewish American groups as Israel’s leader.

“The most important thing is today is a celebration,” Eric Fingerhut, JFNA’s president and CEO, told the Forward. “The first thing we wanted to do is celebrate the holiday of Sukkot together and welcome the prime minister. Nobody is a political party, nobody has an agenda.” He said he appreciated how the new coalition government had already reached out extensively to the North American Jewish community.

Appearing at ease with the crowd, Bennett shared personal stories of his parents emigrating from the U.S. to Israel and the conversations he had with his children before undertaking the responsibilities of prime minister. “I am good at negotiations,” he quipped.

He also said he would like to import American Jews’ tolerance across the spectrum of religious observance to Israel, where the relationships among denominations are often characterized by mistrust. “That’s the dialogue that we are opening up,” he said. “It doesn’t mean we’re going to agree on everything. We are not. But we are going to talk to each other, and we’re going to listen to each other.”

And he urged those present to work together to take the American-Israeli alliance “to the next level” — and to instill a love for Zionism to inspire the next generation.

In both speeches, Bennett made no reference to the Israeli-Palestinian conflict, an issue that is important to both the Biden administration and American Jews.

But he did address last week’s House vote on funding for the Iron Dome defense system, which some progressive Democrats met with resistance. Eventually, the funding passed with overwhelming bipartisan support, which Bennett credited to American lawmakers’ appreciating Israel’s essential role in the global war on terror. “We are nine million boots on the ground,” he said.

“We’re gaining intelligence methodologies and we are funding them without ever asking America to send even one troop,” he continued. “The very essence of Israel, acting where it is, defends people across the world.”

“The extended Squad’s behavior surrounding the Iron Dome defense system proves that they are either ignorant or antisemitic,” Erdan said, referring to the eight or so Democrats and one Republican who did not support the funding. “It is one thing to criticize Israel — that is legitimate. But it is a completely different thing to oppose protecting the lives of Israeli civilians from the rockets fired by a designated terrorist organization. This hate verges on antisemitism.”

Bennett is set to address an Orthodox audience on Monday evening, following holiday services at Congregation Kehilath Jeshurun in Manhattan.