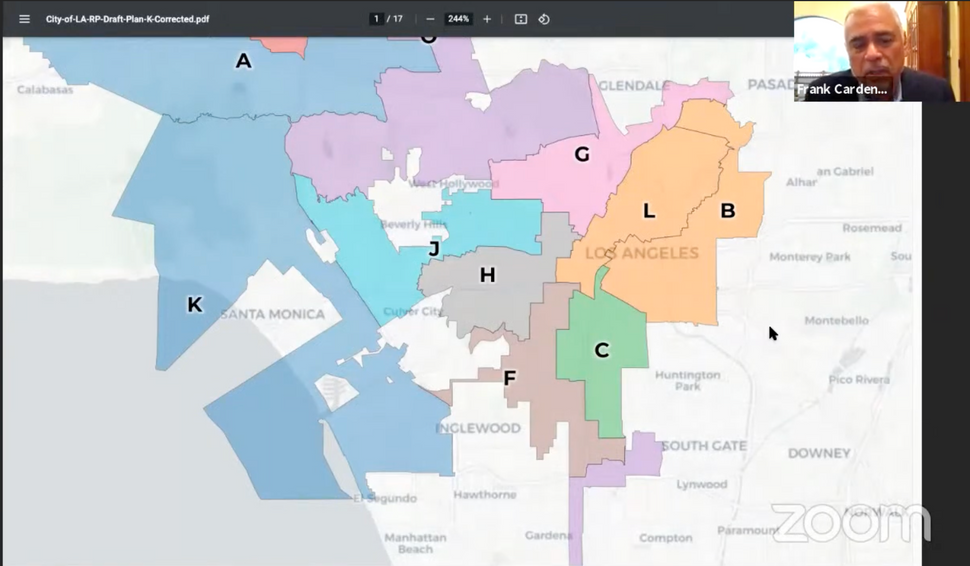 Why the urgent call for prayers? Had a congregant fallen ill? An Israeli soldier gone missing?

A once-per-decade shift in the lines separating city districts was probably not what congregants were expecting. But the Los Angeles City Council district map was soon to be redrawn, and the rabbi wanted to make sure the Jewish community would do all it could — from praying to testifying before city officials — to make sure that the new map empowered Jewish voters.

The final draft of that map, approved by the council’s redistricting commission in a 16 to 5 vote Thursday, seems to have answered the rabbi’s prayers.

It consolidates Jewish neighborhoods into two of the city’s 15 council districts, forming powerful Jewish voting blocs in Mid-City and in the San Fernando Valley and likely increasing the community’s power in city hall.

Thursday’s meeting considered an alternative map that would have split both the Mid-City’s and the Valley’s Jewish neighborhoods into separate districts. But the redistricting commissioners, who are political appointees of city council and local government members, picked the map that was first introduced Monday.

The chosen map, referred to as Plan K-2.5, will be presented during four public hearings in October before a city council vote.

“To have Jewish communities together so we can use that right to vote in a stronger way so that we get representation, that’s the basic tenet of American society,” said Rabbi Yitzchok Summers of the Pico-Roberston synagogue Anshe Emes, who had encouraged his congregants to make their views known to the commission.

There are times when the Jewish community’s needs stand out from the general population, said the rabbi, citing as examples obtaining permits to burn chametz before Passover and security concerns at places of worship.

The coronavirus pandemic also provided occasions for the Jewish community to flex its political power. The community fought to keep its day schools open, and several Jewish schools sued the state under discrimination law for that right.

But Summers said most of his community needs are the same as everyone else’s.

“Homelessness, the streets, and traffic, those are also very important issues to us,” he said. “In a way it bothers me — of course burning the chametz is important and security is extremely important. But the ‘regular’ issues that everyone else has, we’re included in that also.”

After the public hearings and a comment period, the new map will go before the city council for final approval. So the map is subject to change but could wind up looking much as it does now, with the consolidation of the Jewish neighborhoods intact. Specifically, the 5th Council District, which currently includes the Jewish neighborhoods of Pico-Robertson and Fairfax-La Brea, is slated to absorb two additional strongholds of Jewish life, the affluent neighborhood of Hancock Park and the Park La Brea apartment complexes. Those areas were previously part of the 4th Council District, which is roughly 50% Latino. 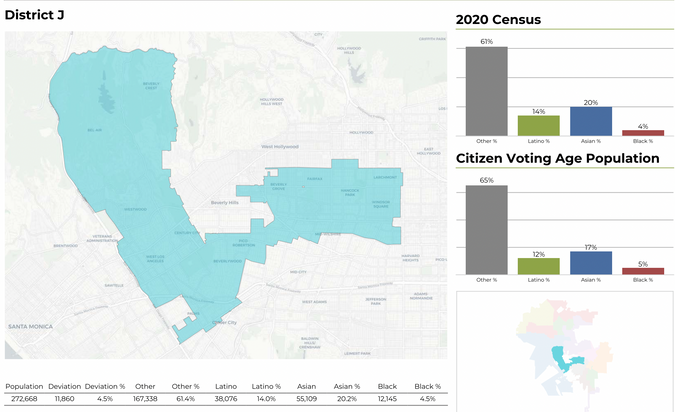 An even more dramatic shift is projected in the Valley.

Currently, the Jewish neighborhoods in the Valley share districts with heavily Latino areas. That means the same council member serves the many Jews in the neighborhoods of Tarzana and Woodland Hills and neighborhoods with a high proportion of Latinos, including Canoga Park, Winnetka and Reseda.

The new map places Tarzana and Woodland Hills with nearby Jewish areas Sherman Oaks, Encino and Valley Village in a radically different 3rd Council District. The three Latino areas would become part of a different district. 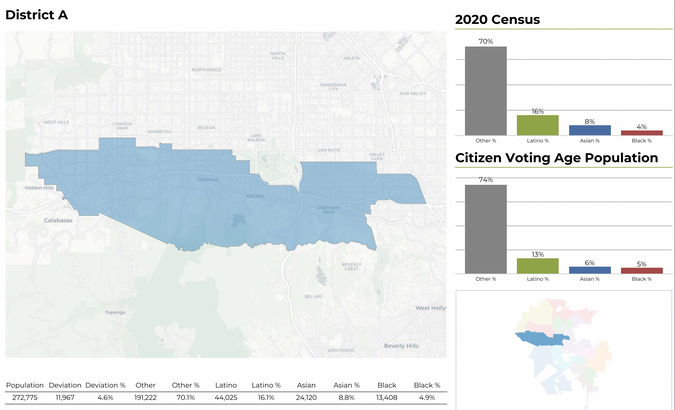 Dr. Irving Lebovics, chairman at Agudath Israel of California, was one of many Jewish residents who lobbied hard for the changes and said he was pleased with the commission’s decision. His organization, which represents Haredi Orthodox Jews in the state, sent a letter to the commission supporting the consolidation of Jewish neighborhoods into Council District 5.

He also called during Thursday’s meeting to support an earlier iteration of the map that was nearly identical to the one adopted by the commission, during 75 minutes of heated public comment.

The executive director of the commission, Frank Cardenas, who also led the 2001-02 redistricting commission, explained his rationale as he presented the draft map at a commission meeting Monday night.

Cardenas said his priority was reducing the number of “bridge districts” — districts that include both city and Valley neighborhoods. Hence Encino’s removal from the sprawling 5th Council District that constitutes much of the Westside, and insertion into the 3rd Council District alongside other Valley neighborhoods. There is only one bridge district in Cardenas’ map, linking affluent coastal areas.

“The commission gave serious consideration to honoring significant public testimony along the lines of unifying Tarzana and Encino and Sherman Oaks together,” Cardenas said.