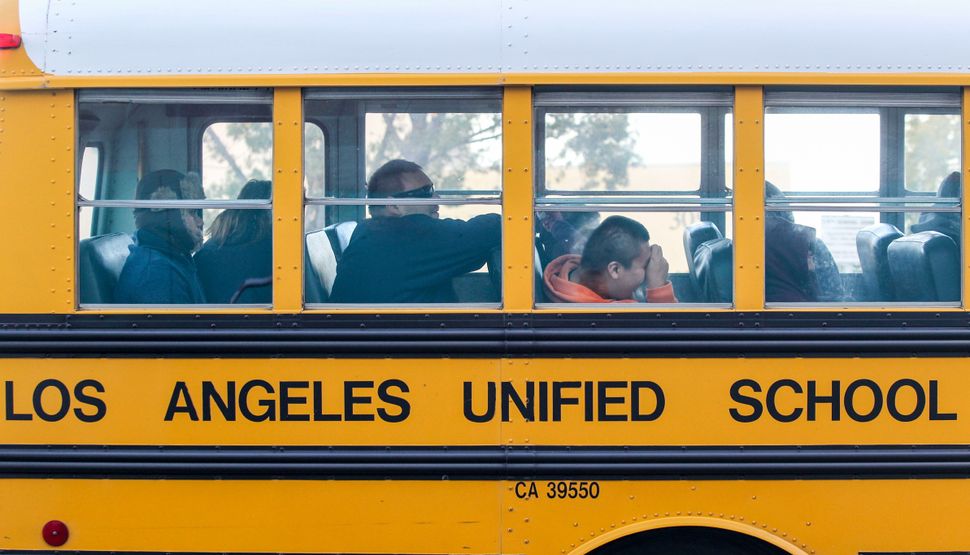 A resolution to support the Boycott, Divestment, and Sanctions (BDS) movement in the second-largest teachers’ union in the country met a quiet demise Thursday evening, defying a trend among public school boards that accelerated after the Gaza-Israel war last May.

In a meeting of the United Teachers Los Angeles, the union that represents roughly 30,000 teachers in the Los Angeles Unified School District, the union’s House of Representatives passed a motion to table the BDS resolution indefinitely by a vote of 94-35 after a spirited 10 minute debate.

The Jewish Federation of Los Angeles, which assembled a coalition of Jewish interest groups to fight the motion, hailed the outcome as a victory over antisemitism.

“This was one of the most important environments we could envision needing to fight BDS because it could have impacted what the average teacher thought was acceptable to teach,” said Dan Gold, the Federation’s vice president of community engagement. “It was very important for us to be loud, be strong and make our voices heard.”

The original resolution, which passed in five of the eight UTLA area chapters in May, expressed solidarity with the Palestinian people, endorsed BDS and called on President Joe Biden to stop aid to Israel, but did not carry any implications for union finances or pensions. Any resolution that passes in an area meeting automatically triggers a union-wide vote by UTLA’s 250-member House of Representatives.

News of the chapter votes prompted widespread outrage in the Los Angeles Jewish community, including among Jewish members of the union itself.

But because the area votes happened late in the 2020-21 school year, the union-wide vote was not held for nearly four months, giving the Jewish Federation time to organize a comprehensive resistance effort.

A coalition that included the Anti-Defamation League, the Israeli-American Council, the Southern California Board of Rabbis and other organizations, engaged teachers, parents and members of the Los Angeles school board in a multi-front campaign. The campaign included a petition opposing the resolution that garnered over 800 teacher signatures and a school board resolution condemning rising antisemitism at public schools. Some teachers also threatened to leave the union over the measure.

“There was a lot of pessimism coming into the vote, but we organized strongly, were able to organize digitally online despite the pandemic and make our voices heard to hundreds of teachers,” said Dillon Hosier, chief executive officer of the Israeli-American Civil Action Network, an organization that lobbied all 250 members of the House of Representatives. “We took an all-of-the-above approach.”

Scott Mandel, a Jewish UTLA member and music teacher at Pacoima Middle School, crafted a subsidiary motion tabling the BDS vote. It was passed by the union’s 40-member Board of Directors in July.

Though teachers who raised their hands to support the motion to postpone heavily outweighed the opposition on Thursday, meeting rules called for equal distribution of speaking time.

Another teacher says Black and Palestinian liberation issues are inseparable.

“If we entertain a both-sides retort, we are invalidating our calls for justice. This is not a both-sides argument. One side is illegally occupied, other is occupier.”

The common thread in the desire to table the vote was concern about its divisiveness when looming contract negotiations with the district make unity paramount.

Others wanted to see the vote on the original resolution play out, even if it seemed likely to fail.

After 10 minutes elapsed, the House of Representatives voted not to extend discussion and the vote on the subsidiary motion was held.

The pro-Israel groups’ victory in Los Angeles bucks the recent trend of BDS in American labor unions, and raises a question of whether their strategy can scale.

Gold, the Federation vice president, said having time to organize was as critical as the organization efforts themselves.

“Oftentimes BDS motions are brought in the middle of the night,” Gold said.

Similar resolutions had passed in teachers’ unions in San Francisco and Seattle in May after an outbreak of violence between Israel and Palestinians. Over 250 Palestinians died in the 11-day conflict, along with 12 Israeli civilians, according to the New York Times.

Those resolutions were passed at the union level before they could be widely discussed — and before any lobbying effort could be organized.

But Gold also credited legwork that long preceded the discord. He cited as an example the numerous trips to Israel the Federation had organized for local public school teachers.

As the campaign to stop the resolution gained momentum during the summer, Glenn Sacks, a UTLA member who teaches social studies at James Monroe High School, wrote an op-ed defending it.

But following the outcome of the vote Thursday, Sacks said the decision to table what he thought was an imperfect resolution was the best way to diffuse an issue that had created unnecessary division.

“While I have sympathy for the original resolution, it’s a lose-lose for UTLA,” Sacks said.

The substitute motion, he said, was fair enough.

“It’s a way to diffuse this thing,” he said.