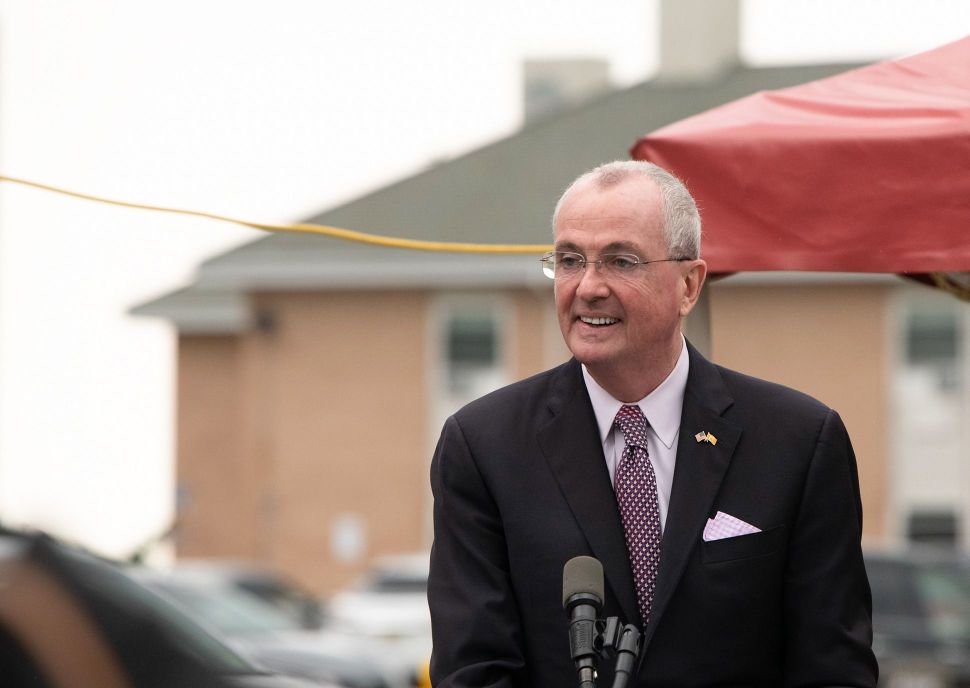 Progressive and Orthodox Jews often gravitate to rival candidates. But running for reelection, New Jersey Gov. Phil Murphy has managed to win support from both groups.

He is going to need it.

The election has surprisingly tightened in recent weeks. Democrat Murphy’s 26-point lead against his Republican challenger, Jack Ciattarelli, has dwindled to six points in a poll released Wednesday. Then there’s what some people call the 44-year “curse.” The last Democratic governor to win reelection in New Jersey was Brendan Byrne in 1977.

In these last days of the campaign, Murphy and big-name supporters — including President Joe Biden and former President Barack Obama — are trying to turn out his base. A not insignificant part of that base in Jewish.

New Jersey is home to the fourth-largest Jewish community in the U.S. and has the second-largest Jewish population per capita than any other state, trailing New York, and making up six percent of the state’s electorate. In a close race, Jewish voters could make a critical difference.

“He has a genuine warmth and understanding for all facets of our community,” said Karin Elkis, who has been involved in Jewish politics for the past three decades and co-chairs the New Jersey-Israel Commission.

Appealing to the Orthodox

About 70% of American Jews lean left, according to the Pew Research Center, and for the New Jerseyites among them, Murphy is an attractive candidate. 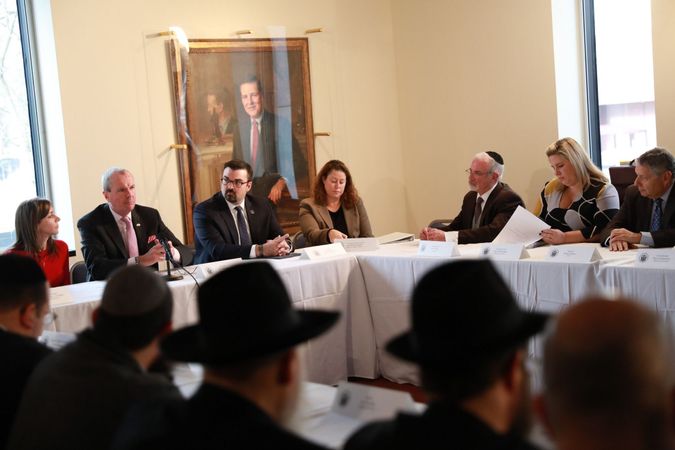 Halie Soifer, chief executive of the Jewish Democratic Council of America, which endorsed Murphy, said he “has led on every issue that are priorities of Jewish voters,” and praised his leadership on climate change, voting and reproductive rights, in addition to supporting Israel.

But what’s less obvious is how Murphy, 64, has been able to woo Orthodox voters, whose politics often don’t align as well with his.

Still, he’s been able to deliver much of what’s important to them.

In his first term, Murphy increased education and security funding for nonpublic schools and has spoken out strongly against antisemitism, including his condemnation of those who singled out Orthodox Jews for failing to comply with pandemic restriction.

He’s also been firm in his support for Israel.

During his first term Murphy traveled to Israel twice; renewed the New Jersey-Israel Commission, which oversees trade relations with Israel and was originally established in 1988; and recently used the state’s anti-BDS law against Unilever, the parent company of Ben & Jerry’s, over the ice cream maker’s decision to end sales in the occupied West Bank.

“Phil Murphy might be Catholic but he has a lot of Yiddishkeit,” remarked Dani Dayan, former Israeli Consul General in New York, who maintained a close relationship with Murphy and called him the most pro-Israel Democratic governor in the nation. 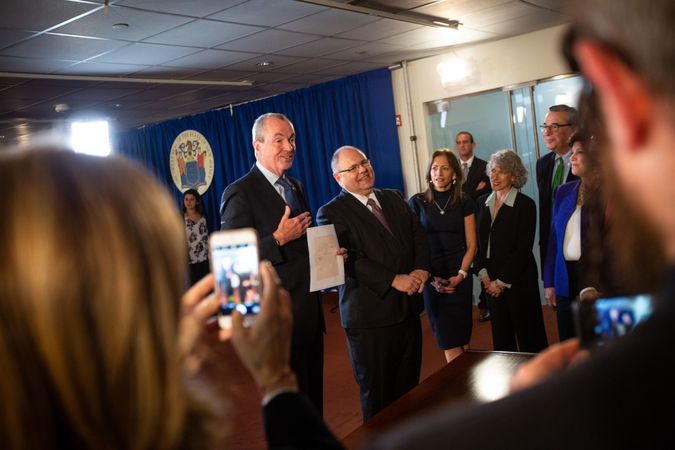 Gov. Phil Murphy, with then Israeli Consul General Dani Dayan, signs a resolution commemorating the 70th Anniversary of the establishment of the State of Israel on May 14th, 2018. Image by Edwin J. Torres/ GovernorÕs Office

“He has been a good friend of our community,” said Rabbi Avi Schnall, the state director for the umbrella Orthodox group Agudath Israel of America.

On the campaign trail, Murphy has made Orthodox Jews a priority.

Last week, the governor made six stops in the predominantly-Orthodox town of Lakewood, where he also received the endorsement of the Vaad, the council of Jewish leaders. Chris Christie, the former Republican governor, received 83% of the Lakewood vote in his 2013 reelection bid, and Donald Trump got a similar share of the vote in 2020.

On Thursday, Murphy will visit the Chabad House at Rutgers University, ahead of a large rally with Sen. Bernie Sanders from Vermont.

Murphy in an interview said the roots of his affection for Jews and Israel go back to his childhood. He said he formed close friendships with Jewish kids at public school in his hometown, Newton, Mass., one of the most Jewish cities in the U.S.. But a “transforming chapter” in his life, he continued, was his appointment as U.S. ambassador to Germany in 2009. Murphy and his wife Tammy became very close with Israel’s ambassador there, Yoram Ben Zeev, who served as a lieutenant in the Israel Defense Forces in the 1967 Six-Day War.

After promising his friend he would visit Israel after leaving the State Department, Murphy traveled to Israel in the summer of 2014, during the war between Israel and Hamas in Gaza. 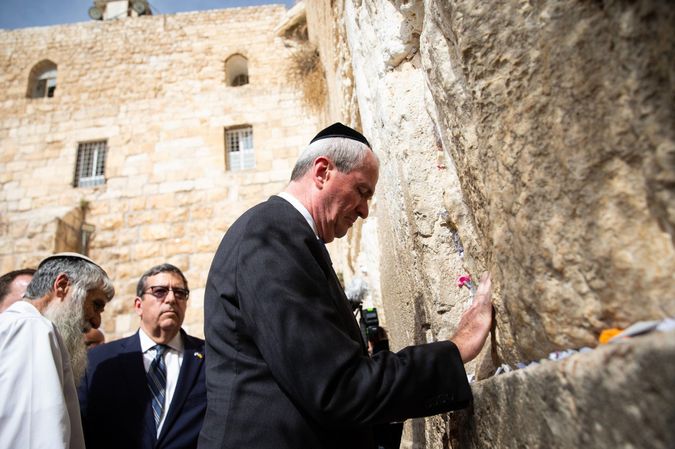 NJ Gov. Phil Murphy praying at the Western Wall in Jerusalem on Oct 23, 2018.

On his first state visit to Israel in 2018, Murphy had a long one-on-one conversation about economics with then-Prime Minister Benjamin Netanyahu, but also marked the death of his Jewish father-in-law, Edward Brown Snyder, whose family fled the pogroms of Germany and Poland in the 19th century. The governor’s seventh trip to Israel was In December of 2019.

“I can’t wait to get back,” Murphy said.

Gridlock in Washington, Murphy said in a phone interview, is making his reelection bid unexpectedly difficult in a state where voters have long favored Democrats.

“There’s a lot of people who are looking at Congress right now, particularly in my case as a Democrat, and say, ‘Hey, your party’s in charge of both houses. How come you can’t get an infrastructure bill done?” Murphy said.

Plus, he said, voters are frustrated in general, after close to two years of COVID-related restrictions. 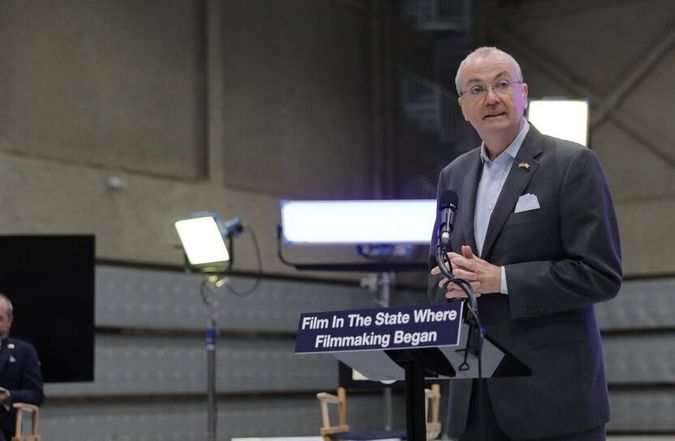 Despite Murphy’s struggle for a second term, he still bills himself as the kind of Democrat who is most likely to win over a wide spectrum of voters.

“I’ve been, I think, pragmatically progressive,” he said. “I have been able to always stick to my core principles and beliefs as a proud Democrat, but I’ve also been able to find common ground with people who I may not agree with on some things, and that includes President Trump during the darkest days of the pandemic.”

He offered another example in his recent meeting with local Muslim-American leaders.

Murphy opposes the Boycott, Divestment and Sanctions movement, which he considers counterproductive to peace. Though many Muslim-Americans support it, he said he was nevertheless glad to engage on the issue.

“As you can imagine, that was a healthy discussion, but it was a respectful one,” Murphy said. He said he told the group that every time his visits Israel, he meets with Palestinian representatives in East Jerusalem.

Murphy said he will be “incredibly aggressive” in the last days of the campaign. He labeled his Republican rival “a very extreme hard-right candidate,” despite the fact that Ciattarelli hasn’t been endorsed by Trump, and warned that New Jersey could follow the path of Texas in restricting voting and abortion rights if he loses.

Voters go to the polls on Tuesday.