‘Antisemitism is too normalized’: Students rally after replica Torah is defaced 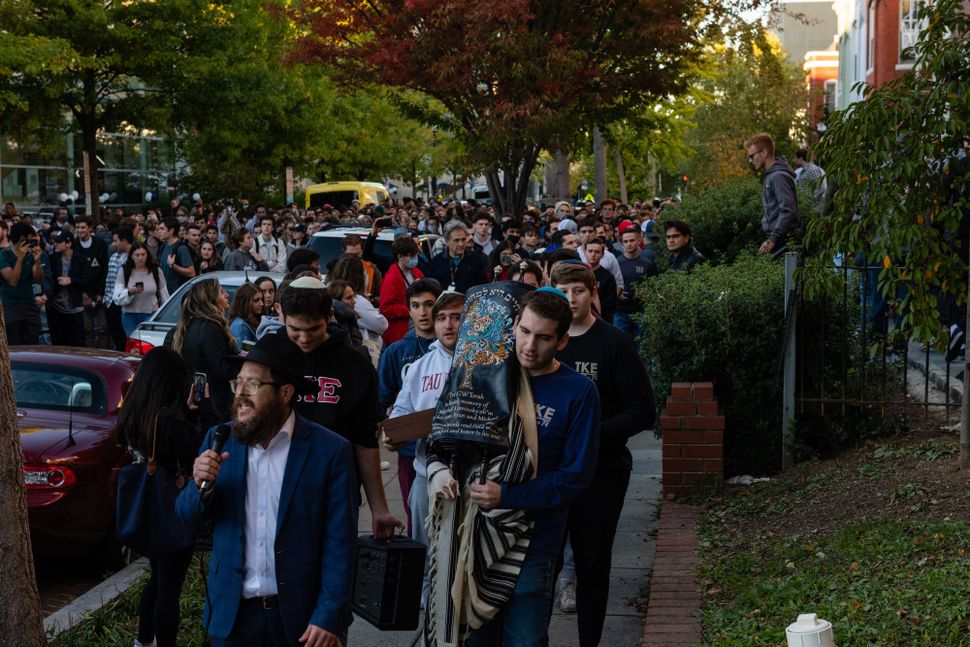 Members of Tau Kappa Epsilon and others march toward Kogan Plaza at George Washington University in Washington, D.C. on Nov. 1, 2021. Photo by Eric Lee for the Forward

Hundreds of Jewish students and supporters gathered on the campus of George Washington University Monday evening to protest the vandalism of a replica Torah in the basement of a fraternity house on campus.

With many attendees decked out in the school’s navy blue colors and Greek life apparel, and a handful wearing yarmulkes, the crowd marched across campus singing “Am Yisrael Chai” — the people of Israel live — and paused at a Jewish fraternity and sorority to place mezuzahs on the door frames.

“The response must be loud and clear,” Yudi Steiner, a campus rabbi who led the procession, told the crowd. “I need everyone singing and clapping because you know just as much as me that we need that extra energy today.”

The rally, which concluded with a Torah reading, was a forceful response to what many students described as a startling incident that occurred early Sunday morning: Residents of a house owned by Tau Kappa Epsilon returned home from Halloween celebrations to find hot sauce thrown onto the walls, appliances damaged and a small printed Torah doused with laundry detergent in the basement.

“My heart aches for the entire Jewish community at GW,” Chris Osbourne, the president of TKE, said at the start of the march.

The vandalism was quickly condemned by university president Thomas LeBlance, who called it an act of antisemitism in a statement to the student newspaper, which reported that campus security and the D.C. police department are investigating the incident as a suspected hate crime.

Several students said it took place at a time of rising antisemitism on campus.

“This should be a surprise but it’s not,” said Abby Mittendorf, a freshman who said she came to Monday’s event to support her Jewish friends. Mittendorf said she had heard negative comments about Jews made in casual conversation on campus and that tensions over the Israeli-Palestinian conflict were sometimes used as an excuse for bigotry.

“I think antisemitism is too normalized in our culture,” she said. 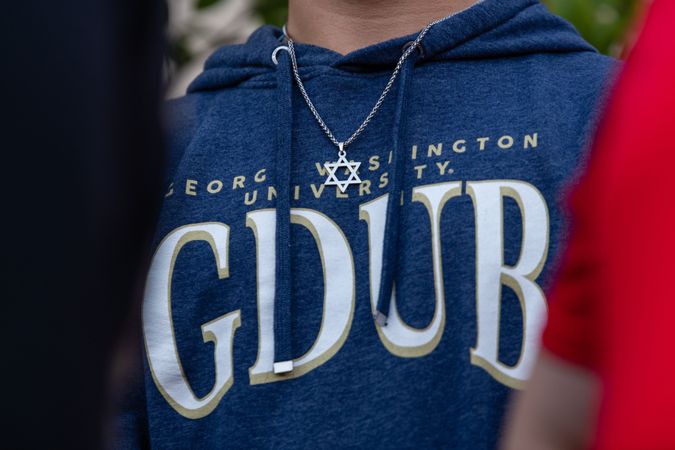 A member of Tau Kappa Epsilon wears a Star of David in Kogan Plaza during a rally at George Washington University in Washington, D.C. on Nov. 1, 2021. Photo by Eric Lee for the Forward

Jewish students point to an incident two years ago, when a video circulated on social media showing a GW student saying that she wanted to “bomb Israel” and calling Jews “pieces of s—-,” and to several cases of swastikas being drawn on campus, as examples of a hostile climate at a university where they make up roughly 25% of the student body.

But despite what some described as a pattern of disturbing incidents, most students said they were not personally worried for their security on campus.

“There are so many Jewish students,” said Tor Lansing, a sophomore who wore a yarmulke to the rally. “I do feel safe.”

Some thought the response to the vandalism was disportionate. Mitchell Barak, an Israeli political consultant and alum of the school, said the incident looked like the work of drunk college kids on a Saturday night.

“When the bars in D.C. close at 1:30 they look for trouble, or an afterparty, and either they had a vendetta against someone in TKE or they were blackballed pledges who weren’t accepted into the fraternity,” said Barak, who graduated in 1990. “Not everyone who’s a vandal is an antisemite.” 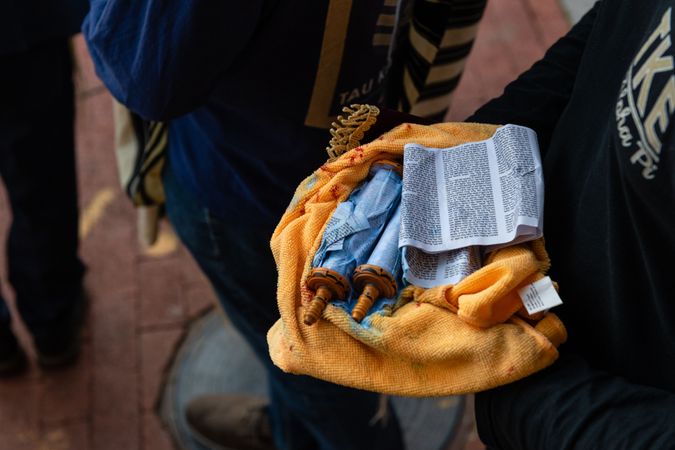 A member of the TKE fraternity at George Washington University carries a small replica Torah that was doused in laundry detergent during an incident of vandalism Sunday morning. Photo by Eric Lee for the Forward

The replica Torah damaged in the incident was kept in the basement in a crate with a Christian Bible, according to Osbourne, the TKE president, and while both were dumped out of the container only the Torah was damaged. Tau Kappa Epsilon is not known as a Jewish fraternity. At George Washington, its share of Jewish members approximately reflects the 24% of the overall student body that is Jewish.

But Ezra Meyer, president of the student club GW for Israel, said that skeptics emerge every time an event that concerns Jewish students takes place on campus.

“There’s a possibility that it was some drunk kid on Halloween,” Meyer said. “But in most of these instances, there have been people who have been quick to be dubious of the presence of antisemitism.”

It “is quite a coincidence for these things to keep happening to the Jewish community at this school and have it not be antisemitism,” he said.

The vandalism comes days after Hillel International and the Anti-Defamation League released the results of their first-ever joint survey about antisemitism on college campuses. The survey found that a third of American college students said they had experienced antisemitism in some form over the last year. The ADL’s D.C. chapter tweeted that it had spoken with students and police and “expected a full & rapid investigation.”

As news of the incident spread rapidly online, several inaccuracies spread as well. Among the many accounts stating that the vandalism took place at a Jewish fraternity were Yeshiva World News, an Orthodox news service, and the American Jewish Committee, which last week released an antisemitism report of its own.

Portions of this post appeared first on Jewish Telegraphic Agency.

‘Antisemitism is too normalized’: Students rally after replica Torah is defaced