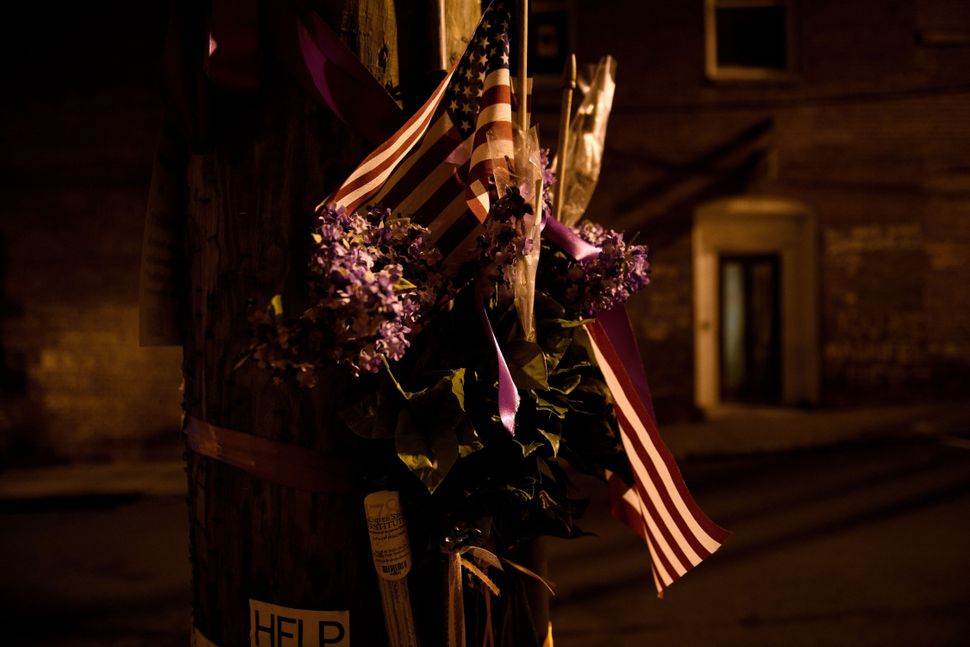 This photo shows a US flag a make-shift memorial to those injured and to Heather Heyer who was killed when James Fields drove into a crowd of protesters on August 12, 2017 a day before his trial begins at Charlottesville Circuit Court, on November 25, 2018 in Charlottesville, Virginia. – Fields is being charged with murder and hate crimes after allegedly driving into a crowd of counter-protesters gathered at the “Unite The Right” protest in Charlottesville. Photo by Getty Images

Deborah Lipstadt, President Biden’s nominee for global antisemitism envoy, is slated to testify as early as Wednesday afternoon in a federal trial in which nine plaintiffs are accusing 14 men and 10 groups of conspiring to violate their civil rights at the 2017 “Unite the Right” rally that killed a counter-protester and injured 35 others.

Lipstadt, a renowned Holocaust historian, plans to argue that antisemitism was integral to the violence that accompanied the rally, which began with some activists chanting “Jews will not replace us.”

“The ideology, symbols, and rhetoric that were on display at the Unite the Right rally fit comfortable within a long tradition of antisemitism and share in the tradition that led to the violent murder of millions of Jews in the Holocaust,” Lipstadt wrote in a 48-page report filed with the court in July.

Lipstadt’s testimony would come in the trial’s second week, as attorneys for the plaintiffs, led by the crusading litigator Roberta Kaplan, seek to convince 12 jurors that the defendants’ gathering in Charlottesville was a pointed effort to carry out racist violence, and thus an illegal conspiracy under the Ku Klux Klan Act of 1871. 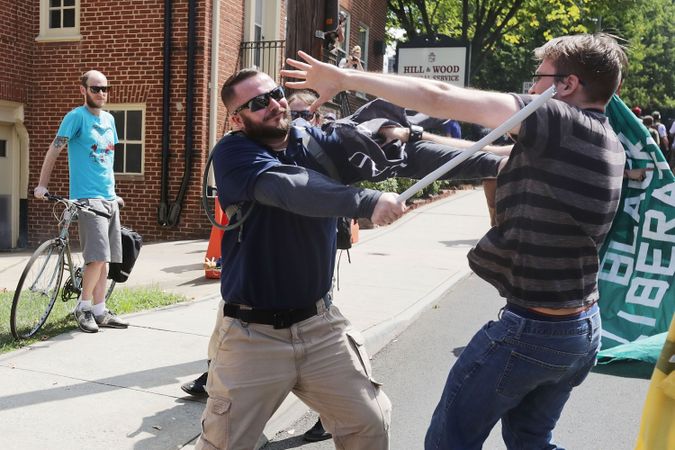 White nationalists, neo-Nazis and members of the “alt-right” clash with counter-protesters in the street after the “Unite the Right” rally was declared an unlawful gathering by Virginia State Police August 12, 2017 in Charlottesville, Virginia. After clashes with anti-fascist protesters and police the rally was declared an unlawful gathering and people were forced out of Emancipation Park, where a statue of Confederate General Robert E. Lee is slated to be removed. Photo by Getty Images

Counter-protestors who were injured at the rally, including University of Virginia students who were attacked during a torchlight march on campus, have testified about the long-term damage they suffered as a result of the violence.

At times the trial has deteriorated into farce, with many of the defendants representing themselves in court. Christopher Cantwell, known online the “crying Nazi,” has held forth at length on ideas only tangentially related to the case

“This is not a podcast,” Alex Conlon, an attorney for the plaintiffs, complained to the judge during one of Cantwell’s digressions.

Less than a year into Donald Trump’s presidency, the Charlottesville rally was a watershed event that evoked the threat of a growing far-right menace emboldened by the dog-whistles of the new occupant of the nation’s largest bully pulpit.

A group of white nationalists gathered over two days in August 2017 in what was intended to be a show of strength by fringe political figures who, long marginalized in American society, felt that Trump’s election offered them legitimacy.

Hundreds of protesters marched through the University of Virginia campus on a Friday night holding tiki torches and chanting antisemitic rants. The next morning, members of Charlottesville’s only synagogue, Congregation Beth Israel, removed their Torah scrolls and left through the back door as armed far-right demonstrators marched by.

Now, more than a dozen organizers of the Unite the Right rally are back in the southern university town for the trial, in which the plaintiffs accuse them of a “meticulously planned conspiracy” to bring racist violence to Charlottesville, and seek monetary damages for their injuries, lost income and emotional distress. 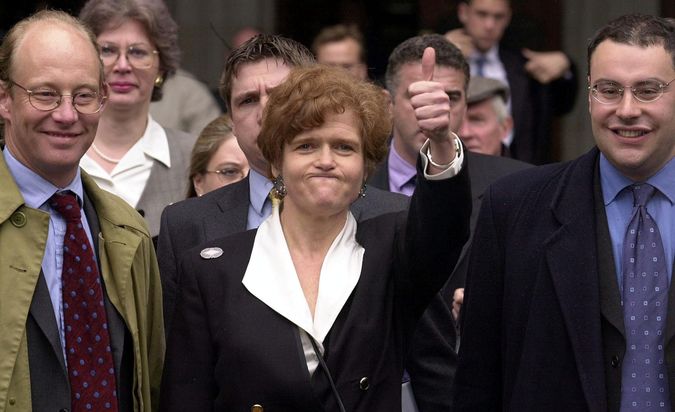 LONDON, UNITED KINGDOM: US academic Deborah Lipstadt (C) exults 11 April 2000 the High Court in London after winning a libel case brought against her and Penguin publications by British revisionist historian David Irving. Lipstadt had described Irving in her 1994 book as a “Holocaust denier” for his claims that Jews were not systematically exterminated by the Nazis during World War II. (Photo credit should read MARTYN HAYHOW/AFP via Getty Images) Photo by Getty Images

Lipstadt, a former Forward columnist and former member of the Forward Association, is no stranger to courtrooms, having successfully defended herself against libel charges leveled by a British Holocaust denier in 1996. That trial was dramatized in the film Denial, in which actress Rachel Weisz portrayed Lipstadt, a professor of Jewish Studies at Emory University.

In her July report to the court, Lipstadt documented the frequent Nazi salutes that dotted the 2017 events in Charlottesville, and notes that Matthew Heimbach, one of the defendants, once said, “We look up to men like Adolf Hitler. She explains in the report that the rally was organized around a the theory of “white genocide,” also known as white replacement theory, which combines racism and antisemitism to claim that Jews are working with racial minorities to subjugate white Christians.

“According to adherents of this theory, the Jews’ accomplices or lackeys in this effort are an array of people of color, among them Muslims and African Americans,” Lipstadt explains. “This fear of active replacement by the Jew, derived directly from the historical underpinnings of antisemitism, is a central feature of contemporary antisemitism.”

The plaintiff’s case is being organized and funded by the nonprofit Integrity First for America. In the trial so far, Kaplan, and her co-counsel, Karen Dunn, have used online chat logs that show organizers discussing what kind of weapons they could bring to the rally and the need for violence to make a political statement.

“There is rapidly approaching a time when in every white Western city, corpses will be stacked in the streets as high as men can stack them,” defendant Andrew Anglin wrote. “And you are either going to be stacking or getting stacked.”