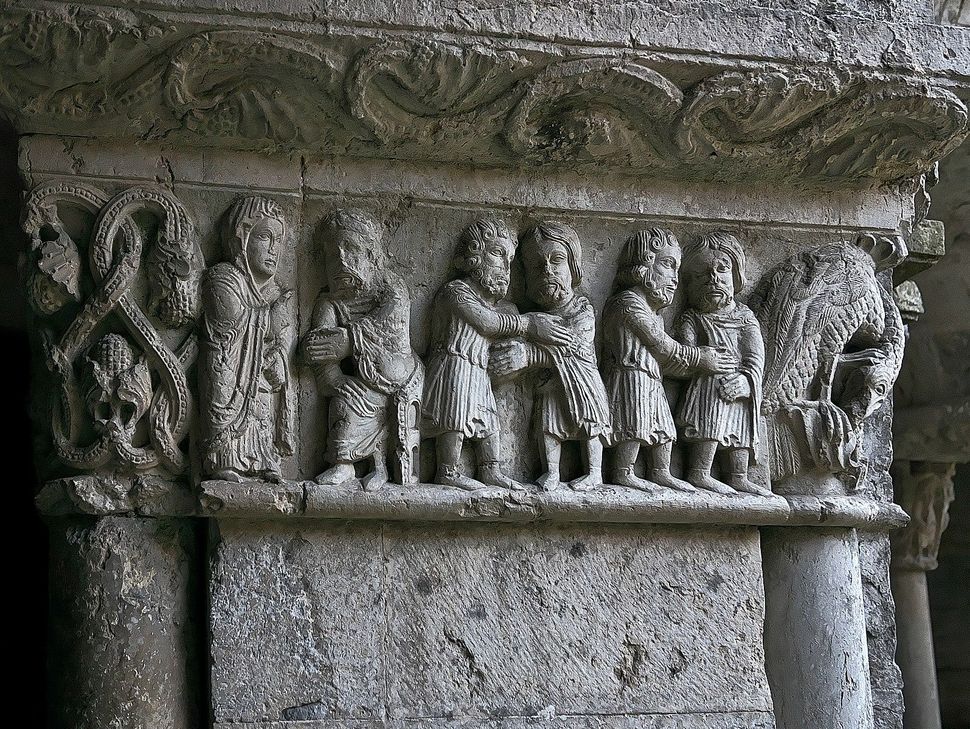 A Spanish frieze depicting, from left to right, Rebecca, Isaac, Esau and Jacob, and the selling of the birthright. Courtesy of Wikipedia Commons

Maybe Rebecca was not deviously plotting a coup to help one son over the other, but strategically trying to show her husband that both their boys had strengths to celebrate. Maybe Isaac’s fathering flaws are rooted in the fact that his own father almost sacrificed him at the altar. Maybe I shouldn’t view biblical characters through a 21st century lens of privilege and hyper-parenting.

These were among a flood of insights that readers shared in response to last week’s newsletter, titled “The Torah is not a parenting manual.” It was all about the struggle I’ve been having with Toldot, the Torah portion in which Rebecca helps Jacob steal the birthright and then the blessing of his twin, Esau, tricking their father, Isaac, in the process.

It was the first time I’ve written a full column about a Torah portion — and more of you read it than read any other one since I started this weekly thing 18 months ago. I’m not quitting journalism to go to rabbi school or anything, but I thought I’d embrace the Talmudic tradition of give-and-take and devote this week’s newsletter to your thoughts on this classic story of family dysfunction.

“The Jewish way is to question,” Rabbi Hillel Adler of the Consortium for Jewish Day Schools wrote me in an email. Indeed. Thank you for your questions — and answers.

One of the first, and most thoughtful, emails I got last Friday was from Marsha Mirkin, who literally wrote the book — or at least a book — on how we might relate to Rebecca’s parenting choices: “The Women Who Danced by the Sea: Finding Ourselves in the Stories of our Biblical Foremothers,” published in 2004.

“I saw the story as dealing with favoritism and limitations that get in the way of growth and connection,” Mirkin said. She noted that the word “love” is rare in the Torah but present in this chapter, and argued that Rebecca is not so much tricking Isaac into picking her favorite, Jacob, but lovingly nudging Isaac to not totally ignore Jacob.

As a mother of twins, I had argued that Rebecca’s overt favoritism of Jacob without regard to the impact on Esau was impossible to imagine. But I found Mirkin’s take totally relatable. Of course a loving mother would be concerned if her husband seemed to seriously favor one twin; of course she would try to show him the other’s merits in hopes of giving both their best shot at good lives.

“My understanding: ‘Your father took you and was going to sacrifice you when you were young. Don’t make that mistake with your son Jacob,’” explained Mirkin, a psychologist who specializes in families and was a resident scholar at Brandeis University.

“Throughout, she shows Isaac something about this ignored son,” she added. “Twins have different personalities — as you experienced — and Rebecca was wise, and she and Isaac had a special, close relationship. I think Esau and Jacob both were blessed in ways that fit who they could become based on their individual personalities.” 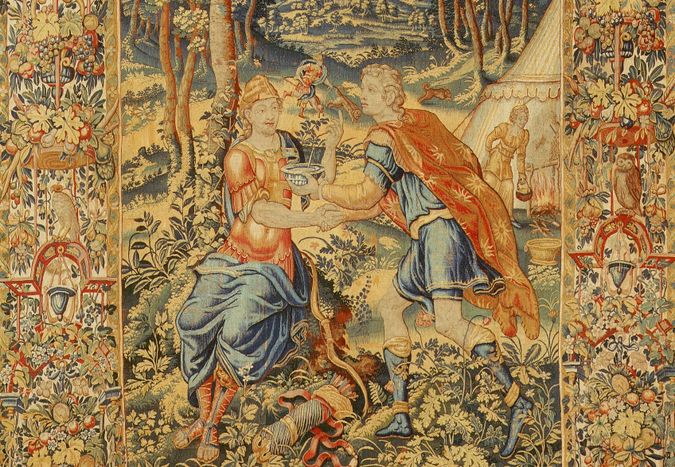 A Flemish tapestry depicting Toldot, in which Esau sells his birthright to Jacob. Courtesy of Wikipedia Commons

Mirkin was one of several people to raise the Binding of Isaac as important context for the Toldot story, something our rabbi, Marc Katz, also talked a lot about as he helped our twins study the portion for their bnei mitzvah last year. “Don’t you think Isaac behaves as he does because his psyche was damaged by his father, who, to prove his love for God, agreed to sacrifice him?” asked a reader named Randi Hacker. “That is some deep trauma to have to live with.”

For sure. Who am I to imagine how the untreated PTSD from that episode plays out?

Roberta Gold, who has taught literature for more than 30 years, compared our endless re-reading of the Torah to the study of Shakespearean classics — even students who know how “Romeo & Juliet” ends, she said, “are on the edge of their seats” and “hope the lovers won’t die.” Every reading brings “a new revelation about how and why the tragedy plays out.”

“The stories in Torah, like all classics of literature, remain ‘classic’ because they reveal universal truths of human nature that do not change over time,” Gold reminded me. “You wanted Rebecca to be a role-model mother of twins because you want to be a role model. But you missed the point. Rebecca’s flaw of unequal love and favoritism is all too human.

“Rebecca is a legitimate matriarch because the Torah does not expect perfection,” she continued. “The characters seem larger than life, but though there are miracles, they are largely people of this (highly flawed) world.”

Nina Mogilnik also found me totally unfair to Rebecca. She particularly chastised me for suggesting that if Rebecca were “a normal mom who loved both her twins” she “might have tried to challenge and change the rules.” Mogilnick found this “breathtaking,” “kind of condescending” and reflecting “some kind of cockeyed chutzpah,” and said I was inappropriately viewing the tale through a contemporary lens of suburban-mom privilege.

“What on earth do you even mean by ‘normal’ mom?” demanded Mogilnik, who has written for The Jewish Week, the Times of Israel and the Forward, among other places. “Is it normal to strive to push your kids to achieve certain kinds of success? Is it normal to prize academic achievement? Is it normal to brag about children? Is it normal to struggle with post-partum depression and still get up off the floor to feed and clothe your kids? Is it normal sometimes to hate your children? To regret having them? Your definition of normal seems to proscribe all kinds of attitudes and behaviors that are endemic to the human condition.”

Point taken. I hate the word ‘normal’ and should never have used it. After getting Mogilnick’s note, I rewrote the sentence in the website version of the column to say “if she was a mom who wanted the best for both her twins.” But Mogilnick also had more to say about Rebecca as both a role model and a realistically flawed character — like all of us.

“One could argue that Rebecca showed extraordinary courage in essentially demanding of God that God answer why she was made to suffer with quarreling fetuses, and to demand to know if having this strife between her children was her purpose,” she wrote.

“I am not excusing the discomfort of reading of a mother who clearly favors one child over another, and a father who offers a stingy blessing to the disliked son,” Mogilnick continued. “At least I have the humility to know that parenting is brutally hard work, that my kids haven’t lived long enough yet to know everything they think they know, and that the best I can do as their mother is love them to the best of my ability, and equip them to go out into the world and be better than I am.”

Actually, that sums up my parenting philosophy almost exactly.

And there was yet more wisdom in my inbox:

From Michael Klayman: “I feel Rebecca’s pain, because what she did she did for the nation, and not for her family specifically. It must have been excruciatingly difficult for her.”

From Susanna Levin: “I know a rabbi who says that Genesis (which he calls the book of communications) teaches by showing examples of how not to parent.”

David Rubin: “Jacob gets his comeuppance — big time. He has to spend years running for his life. Laban tricks him just as he was tricked. Then, his sons lied to him (tricked him) when they lied about Joseph. But, in every instance of dishonest and deceptive dealing, the tricky person pays for it in the end.”

[email protected]: “These books contain archetypal legends, and perhaps a bit of ancestral memory, but the frequently savage ethics of the protagonists are nothing for us modern-day Jews to boast about.”

Harriett Epstein: “This is real human behavior we are reading — not Father or Mother Knows Best.”

Rabbi Adler, who I quoted above saying “the Jewish way is to question” — a phrase I particularly love given my chosen career — responded to Rabbi Katz’s quote about the Torah not being a parenting manual with, of course, a series of questions: Is the Torah a guide on morals? Is the Torah a manual for marriage and relationships? Is the Torah a history book? Is the Torah a book on theology?

“Maybe the Torah is just trying to teach us stuff,” he concluded.

Sounds right to me. Thanks for helping make that real.