He brought Hanukkah to a street famous for Christmas lights. Antisemitism followed — but so did joy. 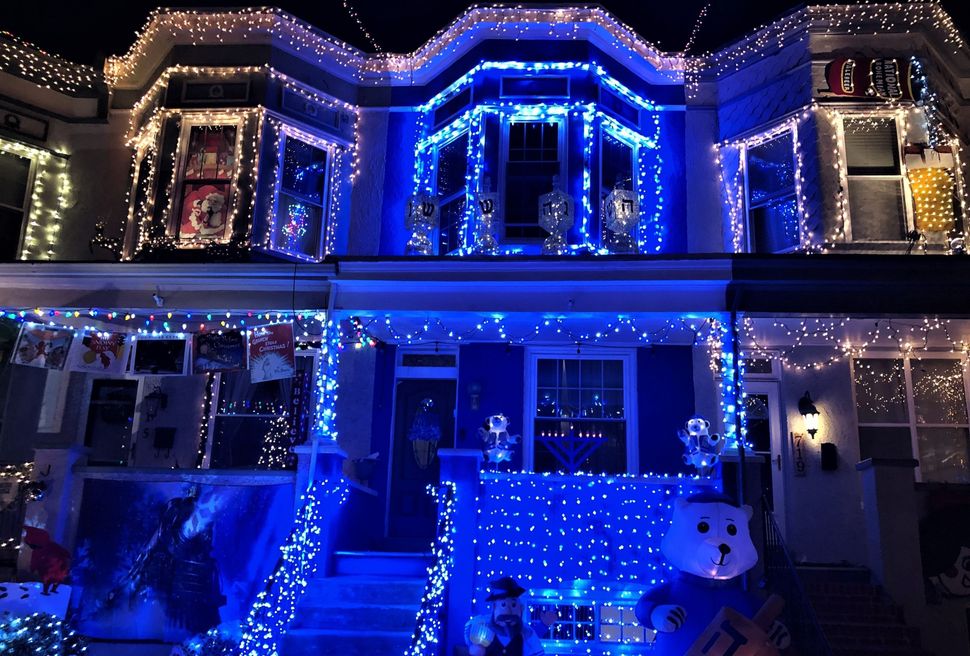 Every year, the 700 block of 34th Street in Baltimore puts on an extravagant holiday lights display.

It’s a holiday tradition in Baltimore: Visiting the Miracle on 34th Street, a city block where houses go all out with candy canes, rooftop Santas and life-size plastic elves and snowmen — except for one row house, where a seven-foot-tall inflatable polar bear spins a dreidel, and a silver LED menorah “burns” from Thanksgiving to New Year’s.

The house’s owner, Joshua Lamont, grew up in the heart of the Baltimore area’s Jewish community in the neighborhoods of Pikesville and Owings Mills. In his childhood, he often visited the annual holiday lights display, which pays homage to its namesake Christmas movie, in the city’s quirky, historically working-class Hampden neighborhood. 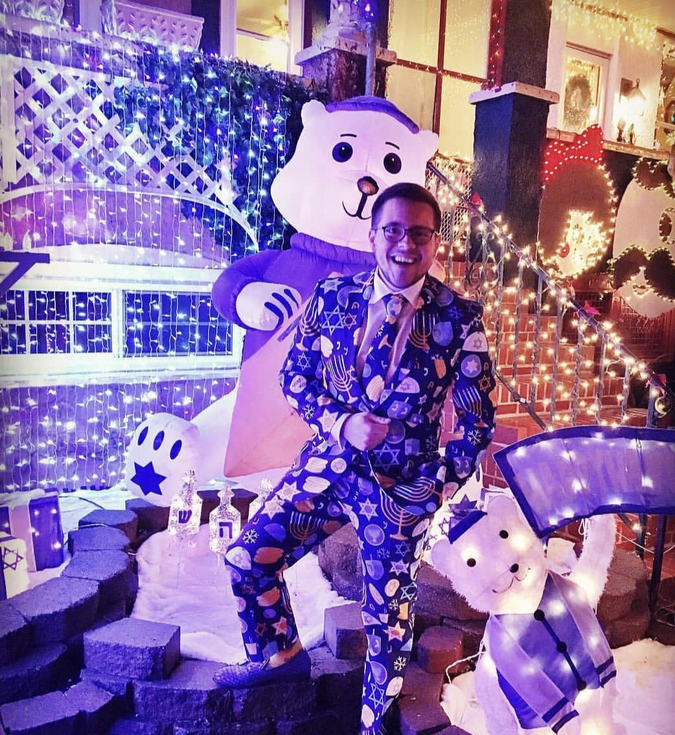 Lamont, 31, a freelance sign language interpreter who also manages his parents’ gemstone shop at the Maryland Renaissance Festival, was impressed by the dazzling lights and extravagant decorations. But he also felt left out. He came, he said, to hate the “sheer in-your-face-ness of Christmas.”

“I found out there was a possibility of living on 34th, and I was like, ‘OK, cool, this is my shot to bring some of our culture and some visibility to the holiday on a larger scale,’” Lamont said.

The result: the “Hanukkah House.”

Yes, Lamont said, Hanukkah, a fairly minor holiday, is given extra importance because it often falls near Christmas. But his Hanukkah House, he says, is no monument to commercialism.

“Not a single house on this street makes a profit off this event,” he said. “No one takes care of the electric bill. We do this out of the sheer joy it brings people.”

“So while maybe the industrial complex of Christmas has created a capitalist-driven holiday, that’s not what we’re about.”

For Lamont, who was raised in a religiously “Conservative-leaning” household and now identifies as “more spiritually, culturally Jewish than religiously,” garnishing his home in blue and white is a way of bringing a Jewish perspective to the winter solstice season, even if the dates are sometimes off.

Lamont admits that some non-Jews may be led by his spectacle to see Hanukkah as Jewish Christmas. He doesn’t have any problem with that, even though the Festival of Lights is about a fight against assimilation.

What matters to Lamont — whose great-grandparents were a “nice Scottish boy and a nice Jewish girl” — is highlighting a tale that celebrates the survival of the Jewish people, especially during a time of rising antisemitism.

“We stood up for ourselves,” he said. “In today’s climate, it’s important for us to have that representation.”

That message has occasionally hit close to home. One year, someone spray-painted the polar bear with swastikas. This year, someone drove by and cursed Lamont out.

“I was a wreck for the rest of the evening,” he said. “There was a point in time that I really thought I was going to take all my lights down and be the dark house on the street.”

“It definitely takes a toll. You never know when the next instance is gonna come and if it’s gonna be worse than the previous.”

However, Lamont’s neighbors have been “incredibly supportive,” he said. And he tries not to take acts of antisemitism too seriously. For example, he reminded the passing driver that Jesus himself celebrated Hanukkah.

And when there’s vandalism, he tries not to make a big deal out of it. “I fix it when I see it and keep on walking,” he said. “I’m not gonna change their minds. They’re not gonna hear out my rational arguments and go, ‘Oh my Lord, I’ve seen the light!’”

At the same time, Lamont’s lights have served as the backdrop for much joy — like when Pikesville native Zephan Blaxberg proposed to his then-girlfriend, Mollye Lipton, in front of them in 2017.

Blaxberg said the location was sentimental for him because one of the first businesses his family opened upon immigrating to Baltimore in 1912 was a men’s clothing store located nearby on 36th Street.

“To be able to start my family and my next journey in the same place, or rather, just around the corner was meaningful,” said Blaxberg, a videographer. “Being able to celebrate our Jewish heritage as I asked my now-wife to marry me in front of the Hanukkah House was icing on the cake.”

Lamont said that this sort of appreciation from the community motivates him to put up his lights year after year.

“For every moment someone says, ‘F— you,’ I have 10 moments where someone says, ‘Thanks for representing me,’” he said. “To walk out on my front porch and have someone say ‘Hanukkah sameach’ or ask ‘When was Hanukkah this year?’ — all of that lends to the beauty of this and why I keep doing it.”

He brought Hanukkah to a street famous for Christmas lights. Antisemitism followed — but so did joy.