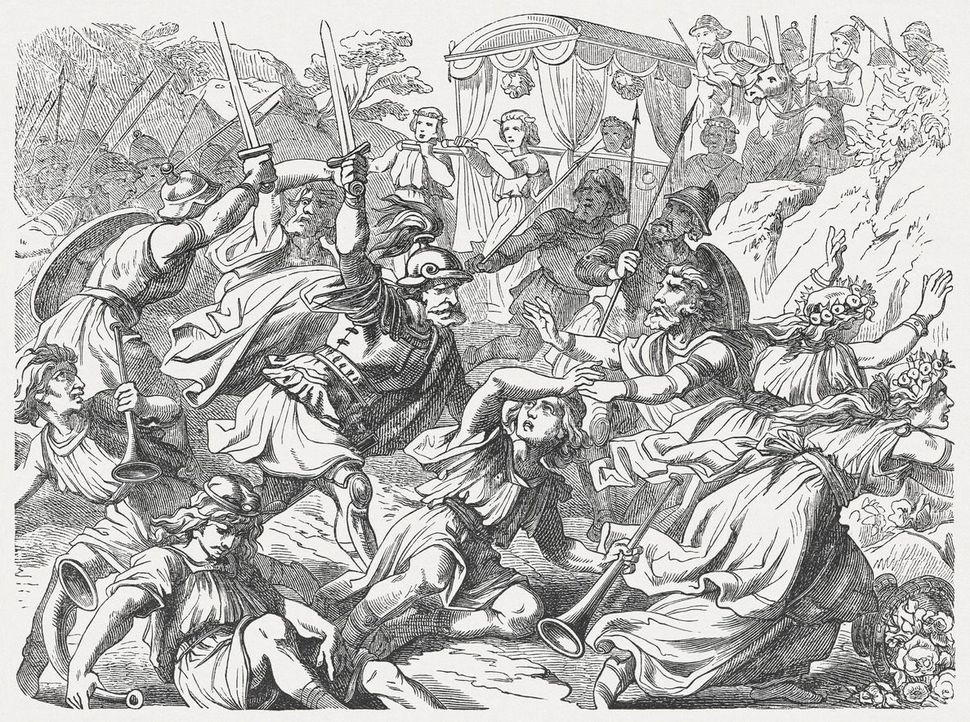 An engraving of the Maccabees in battle. Image by iStock

Corporations — and plenty of everyday people — treat Hanukkah as Jewish Christmas. It has a nice little story about miraculous oil, plus you decorate your house and give gifts. Even plenty of Jews feel this way; Hanukkah provides a way for us to participate in the music, media and cheer that dominates the Christmas season. After all, for many of the people taking advantage of Black Friday sales or putting up yard displays of lights and inflatables, Christmas is barely even Christian anymore — it has become an American holiday about Santa and reindeer and presents, and Jewish Americans don’t want to miss out.

This Christmas-centric celebration of Hanukkah would make the Maccabees — the stars and heroes of the Hanukkah story — go to war. Again. This time against the American Jews who so love celebrating the Maccabees’ last war, whether or not they know it. 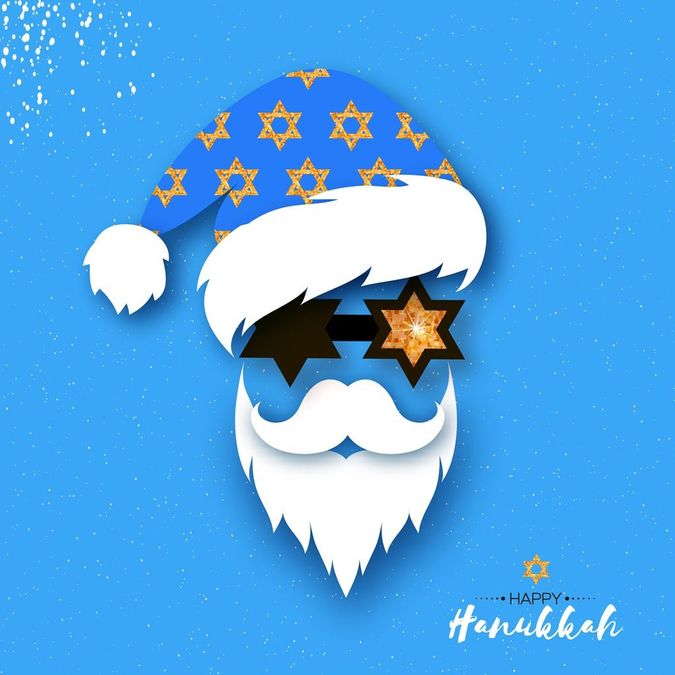 A Maccabean nightmare. Image by iStock

Hanukkah, you see, is actually about zealotry, war and killing assimilated Jews. Today it may be about eating fried foods, lighting candles in the dark of winter and unwrapping gifts with your family on each of its eight nights, but the original holiday commemorates a bloody war not only between the Maccabees and the Greeks but between the zealous and the assimilated.

Not everyone knows this; the holiday has been simplified to make it more appealing to the masses. Growing up, I was taught that Hanukkah was about the miracle of the oil, in which the Jews needed to keep the temple lit but only had enough oil for a day. Miraculously, it stayed lit for eight days, long enough to get more oil, and now we celebrate by eating oily foods and lighting candles. Simple stuff — maybe a bit uninspiring, but it’s got magic and good food and that’s enough for a solid holiday.

This is, however, a small part of the Hanukkah story; some scholars believe the miracle of the oil part was added later on in the holiday’s development, to spice up the story and make it more about God and less about war. And regardless of when, why or how it became part of the story, the miracle of the oil is only mentioned once in rabbinic literature, in the Babylonian Talmud.

The holiday is really about the Maccabean revolt against the Seleucid Empire, a Hellenistic state that ruled over the area of Judea in the beginning of the second century BCE. The Seleucids allowed the Jews to continue to practice their religion at first, but eventually took over the Jewish temple and were using it for sacrifices to Zeus, so a priest named Matityahu, and his five sons — including Judah HaMaccabee — began a revolt against the empire.

During the Seleucid Empire, there was a movement to create a universal, Hellenistic culture throughout the Greek empire, and there was a movement of Jews — often called Hellenistic Jews — who didn’t mind this; they incorporated Greek cultural practices, such as athletic competitions, into Jewish life while largely maintaining their own traditions. They did not feel that being Jewish precluded their participation in Hellenistic culture, and eagerly joined in Greek life, not unlike many secular or assimilated American Jews today who hang stockings next to their hanukkiahs.

The Maccabees rejected the idea of Hellenistic Judaism, however, and the two movements disagreed as to who would become the High Priest in the temple, causing violent conflict. While one Seleucid emperor, Antiochus IV Epiphanes, did crack down on Jewish freedom of worship, defiling the temple and forbidding circumcision, the internal Jewish theological disagreements on purity of practice were also a major motivating factor in starting the Maccabean revolt — possibly even a greater factor than the Seleucid rule. What’s certain is that the Maccabees fought against and killed their Hellenized brethren during the war.

This means that the Maccabees’ win, and reclamation of the defiled temple, was not a victory for the Jewish people as a whole, but instead for a specific form of Orthodoxy and interpretation of Judaism. Their win helped start the Hasmonean dynasty, which ruled the region for about 100 years, until Herod took over, and they instituted Hanukkah as a celebration of their reclamation of the temple.

Of course, they may have won the battle, but the Maccabees lost the war; after the destruction of the temple, Jews were forced into diaspora, where we absorbed all kinds of traditions, even developing new languages such as Yiddish and Ladino that mixed Hebrew with local tongues. Assimilation was essential to survival, and has enriched and diversified Jewish traditions and practices for centuries. Much of the Talmud is even devoted to refining traditions and interactions between Jewish communities and their gentile neighbors.

It’s ironic that Hanukkah — a celebration of strict Orthodoxy and vicious repudiation of assimilation — is, today, often most beloved by the the most assimilated Jews, who are trying to fit in with a dominantly Christian culture with decorations and gifts that model themselves after their Christmas counterparts. But even without the “Oy to the World” merchandise, Hanukkah’s foundational traditions are based on regional traditions Jews picked up in diaspora. You think they ate latkes in Hasmonean Jerusalem? Potatoes originated in South America and didn’t even come to Europe until the 16th century; Ashkenazi Jews living in diaspora in Eastern Europe incorporated them into their diets.

I don’t love the idea of celebrating religious extremists killing and exiling those who disagree with their theological interpretations, so I enjoy the irony of Hanukkah, and embrace these diasporic Hanukkah traditions as a way of thumbing our collective nose at a restrictive regime. (I’m more fond of the diasporic tradition of eating potatoes than the Christmas-lite Hanukkah merchandise, though.)

But despite all of this, the Maccabees’ message can still be felt in even the most assimilated Hanukkah celebration — any Jew celebrating Hanukkah is doing so as a way to maintain their connection to Judaism in the face of the Christian hegemony that dominates the U.S. They may be more Hellenistic than Maccabean, but they’re still trying to hold onto Jewish practice and celebrating its survival.