An exhausted Ethan Lasko during the final minute of Yeshiva’s 73-59 defeat. Image by Screenshot from MacsLive.com

The jump shots that swished for two-and-a-half years were suddenly clanging off the rim. The passes, so reliably crisp, instead were sailing out-of-bounds. The star who could seemingly score at will was all bottled up.

And so the 50-game winning streak of the Yeshiva University men’s basketball team – the second-longest in Division III history, a run that drew national headlines and shattered negative stereotypes of Jewish athletes – came to an end Thursday night, as No. 4 Illinois Wesleyan University came to YU’s home gym and routed the No. 1 Maccabees, 73-59.

Wesleyan’s Titans made their first two shots — open three-pointers from either corner — and looked bigger and faster than the Maccabees all night. YU, which came into the game averaging 92 points per contest, didn’t make a three-pointer until the second half.

The historic winning streak had begun in 2019, and propelled the modern Orthodox school to the top of the Division III men’s basketball rankings. But YU had benefited from its schedule — the team plays in the weakest conference in the country. Thursday’s nonconference matchup was the Maccabees’ first against a ranked opponent in the streak. 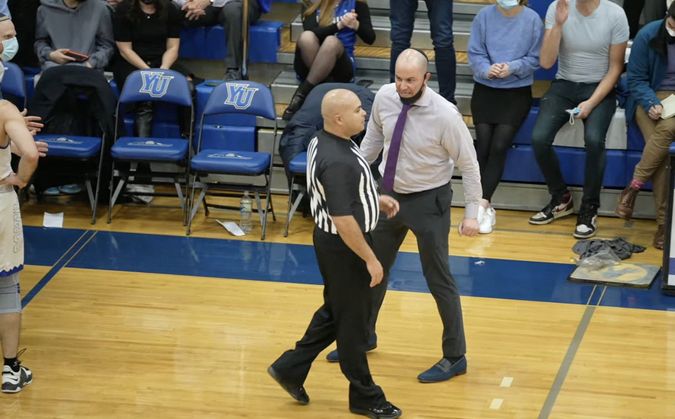 YU head coach Elliot Steinmetz argues a call in the first half. Courtesy of Screenshot from MacsLive.com

The game was as hyped as any Division III matchup in recent memory, a key opportunity for Yeshiva to prove it was no slouch against real competition.

When Wesleyan players picked up snacks at a Washington Heights grocery store on Thursday, Yeshiva fans stopped them for photos and conversation. The Max Stern Athletic Center, where the game was played, ran out of space with 50 minutes to go before opening tip.

But it was all downhill from there. The Macs were not merely defeated on their home court, but entirely outclassed. Yeshiva never led. The Titans made it look easy: they made more than half of their shots, and what felt like every open one.

When they missed, Matthew Leritz — Wesleyan’s 6-foot-7 forward, who towered over the Yeshiva big men — often gobbled up the rebound.

They silenced Yeshiva’s offensive threats, who had no adjustment.

The Macs looked out of sorts throughout the first half, which they ended down by 20 points. They had difficulty generating open shots, and several turnovers — some unforced — led to Titans baskets.

In one representative sequence, the Maccabees held the ball for the last shot of the first half, only for Ethan Lasko to throw a pass into traffic, where a Titan player grabbed it with just a few seconds left. Wesleyan quickly converted the steal into a layup before the final buzzer. (The basket was disallowed over the break.) The Titans’ vaunted defender, Peter Lambesis, lived up to his billing. He blanketed Ryan Turell all night, limiting the Yeshiva star to 22 points, well below his 29.8 average.

The harshness of Thursday’s loss seems unlikely to lessen the achievement of Yeshiva’s historic streak. In the last few weeks, ESPN and the National Basketball Association have both highlighted the winning streak on social media. The slew of positive press for the team, though, has been marred somewhat by a column in the YU newspaper in which a student accused one of the basketball players of rape and said the school conducted a shoddy investigation to protect the team.

More than 5,000 fans streamed the game on MacsLive.com, a YU-affiliated website that broadcasts the men’s and women’s basketball games.

Yeshiva will have one more chance this season to beat a ranked opponent when it faces No. 17 Williams College. That game was originally scheduled for Jan. 2, but has been postponed.