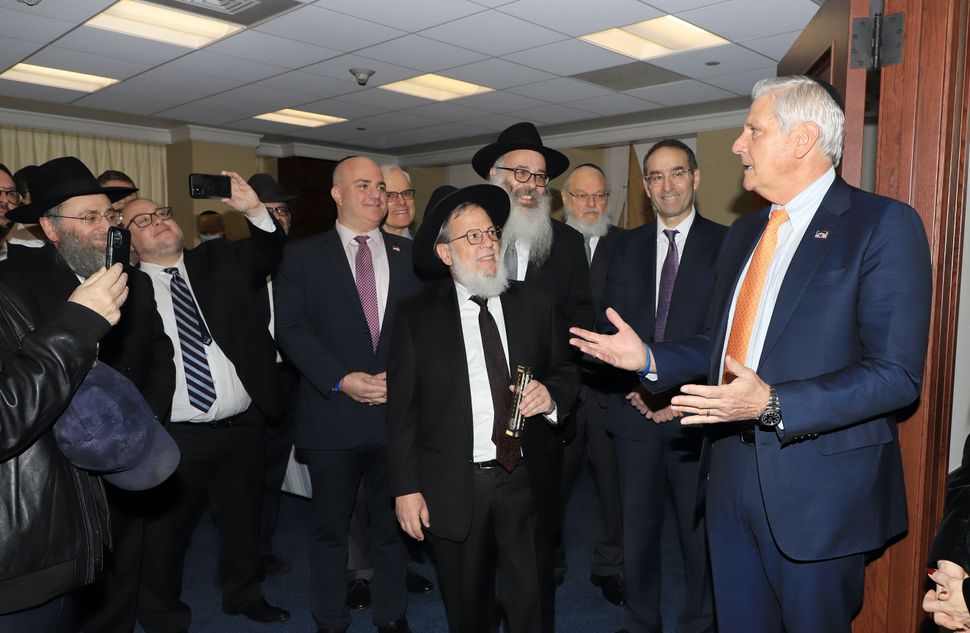 Bruce Blakeman hosts a number of rabbis for a mezuzah instalation at his new office ahead of his inauguration as Nassau County’s first Jewish County Executive on Dec. 31, 2021 Image by Courtesy

When Bruce Blakeman was nine years old, his grandfather Jesse Herbert Blakeman turned to his grandson and asked him to promise that he would never forget he is both an American and that he is a Jew. Two weeks after the young Blakeman gave that promise, his grandfather passed away.

Blakeman, a Republican, became the first Jewish executive of Nassau County in New York on Saturday.

Nassau County, which borders New York City, has a larger population – 1.4 million – than in 10 states across the country. The Jewish community makes up about 19% of its residents. Blakeman served as councilman of the county’s largest town, Hempstead, since 2015. He defeated the incumbent Democrat Laura Curran by 2,150 votes in the November elections.

On Friday, ahead of his official inauguration on Monday, Blakeman hosted a number of local rabbis and Jewish community leaders for a mezuzah installation at his new office. In a Zoom interview with the Forward Blakeman, 66, described the event as “very moving” to him. “Hashem and spirituality are an important part of my life,” he said, using the Hebrew name for God. “I feel that that’s where I derive my strength from.” 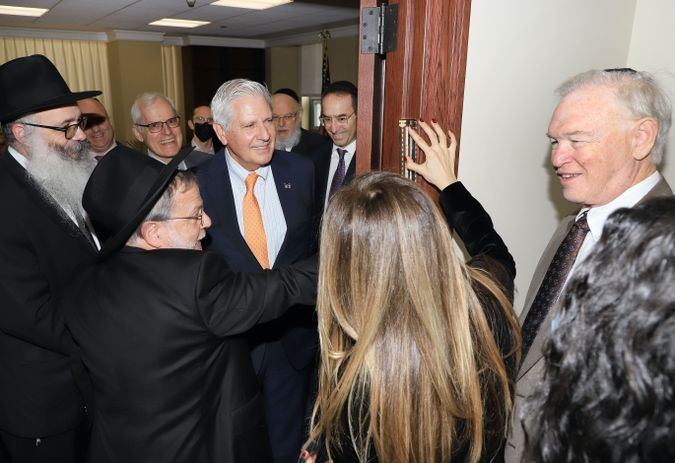 Bruce Blakeman, the new executive of Nassau County, attends a mezuzah instalation ceremony at his office on Dec. 31, 2021 Image by Courtesy

Blakeman, who is married to Sigal Magori and was previously married to Sir Paul McCartney’s current wife, Nancy Shevell, keeps a kosher kitchen but does not observe Shabbat. He is a member of the Jewish Center of Atlantic Beach, an Orthodox congregation, and prays every day. “I have to balance my public life with my spiritual life, which is a challenge every day,” he said. He joked that he calls himself “AOB,” similar to Rep. Alexandria Ocasio-Cortez’s “AOC” nickname: “Almost Orthodox Blakeman.”

He recalled a conversation about religion he had years ago with his mentor, the late Rabbi Binyamin Kamenetzky, founder of the Yeshiva of South Shore and other Five Towns institutions. “He said, ‘You’re Orthodox, but you have to try harder,’” Blakeman said. “So I have tried harder. I’m certainly at a higher level than I used to be. I’m not where I need to be yet, but I’m working on it and it’s an important part of my life.” 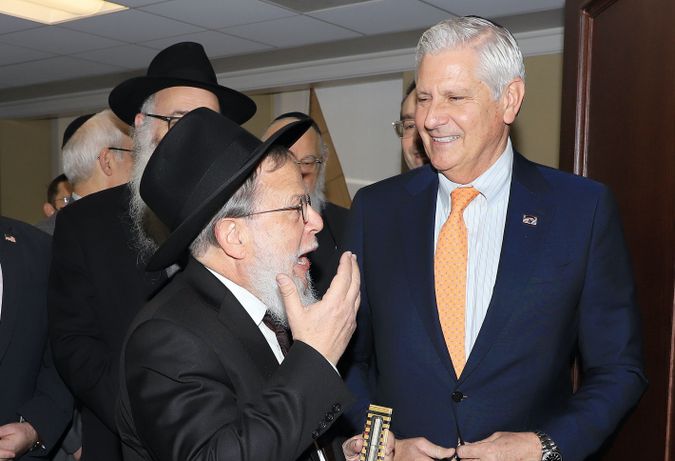 Despite his Orthodox affiliation, Blakeman said he feels a connection to Jews of all denominations. “We have to support each other and we have to be more attuned to the things that bring us together rather than the things that would bring us apart,” he said.

Michael Fragin, a Republican political strategist and a resident of the village of Lawrence, described Blakeman as “a fixture in the local community who wears his Judaism on his sleeves.”

Outspoken on antisemitism of the left

Representing one of the largest Jewish communities outside of Israel, Blakeman said that antisemitism is something he has been fighting for all of his career. In 2019, Blakeman claimed to be one of the candidates considered by the Trump administration to head the office of Special Envoy to Monitor and Combat Antisemitism at the State Department.

“The only way that you can fight antisemitism is if you stand up to it and fight it,” he said.

Blakeman, who ran for Congress in 2014, accused Democratic politicians of not being courageous enough to stand up to what he described were “virulent antisemites” in their own party. “It’s unfortunate that AOC, Ilhan Omar and Rashida Tlaib get away with what I consider very antisemitic statements and policies,” he said. “If they were in my party, I would do everything in my power to have them thrown out, but apparently there are Democrat elected officials that are afraid of them.”

Asked if he would apply those standards on his Republican colleagues in taking action against Rep. Marjorie Taylor Greene, a Georgian Republican, who has issued a torrent of remarks and tweets deemed antisemitic since she was elected to Congress in 2020, Blakeman suggested she was not doing it from a standpoint of being hateful but a lack of education.

Earlier this year Greene compared vaccination and mask requirements to the Nazi rule during the Holocaust. She apologized and visited the U.S. Holocaust Memorial Museum in Washington, D.C. after widespread condemnation and a threat to be censured, but later made more Nazi references and embraced the Nation of Islam — a group whose leaders have regularly trafficked in antisemitic tropes — in her fight against coronavirus vaccinations.

Blakeman said he draws a distinction between intentional antisemitism and “stupid” remarks. “I think in our party’s case, we don’t have people that we feel, by and large, are antisemitic,” he said. “But when they are, we call them out on it. And if they don’t educate themselves, and if they don’t change their behavior, we throw them out of our party.”

He described Greene as someone who is simply “uneducated” about the gravity of the Holocaust. “If she was educated, and she still continued to say and do things like that, then I would have to be concerned about whether or not they were hate motivated,” he added.

As a lawmaker, Blakeman situated himself at the right on issues related to Israel. In 2016, he spearheaded a twin-city agreement between his township and the Samaria Regional Council, a Jewish settlement in the Samarian hills of the West Bank. He told a local publication he doesn’t view the Jewish communities there as settlements.

Blakeman noted that the town he represented since 2015 was the first New York municipality to pass anti-BDS legislation in 2016. It was later implemented across the state in an executive order signed by former Governor Andrew Cuomo that prohibits state agencies from investing in companies involved in boycotting Israel. Nassau County’s legislature passed a similar bill that year.

The township enforced the law immediately after Ben & Jerry’s announced in July that it would no longer sell ice cream in the occupied West Bank by ending its relationship with the local licensee that manufactures and distributes its products in the region.

Blakeman said he intends to use his new position as a pulpit to speak out against antisemitism and build coalitions with some neighboring cities and moderate Democrats to repeal the state’s bail reform bill that lets suspects go free on misdemeanors and nonviolent felonies, even when those charges are listed as hate crimes. Jewish community leaders have attributed the rise in violent antisemitism on the new law which has had a material effect on crime in general.

Pointing to the assault on Joseph Borgen, the 29-year-old resident of his council district who was beaten up in Times Square during the Israel-Gaza war in May, Blakeman stressed that it’s disconcerting for many Jews who “may not feel comfortable wearing a kippah or dressing in a traditional way because they’re afraid that they might be the target of violence.”