YU’s Turell dishes on Macs career, Sarachek, and preparing for the NBA draft 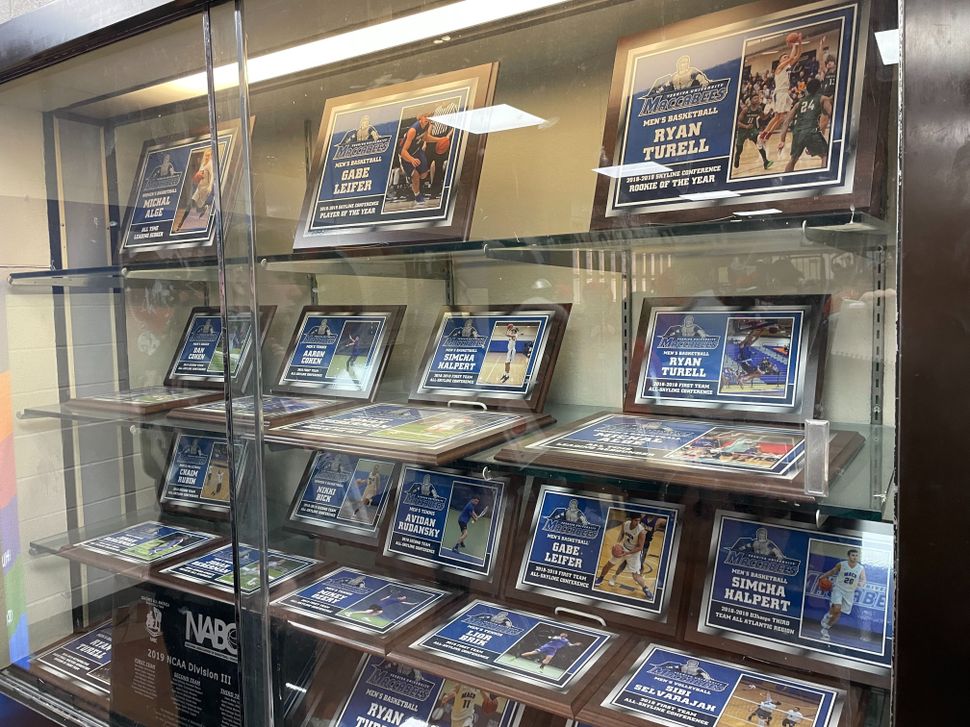 Even standing 6-foot-7 and wearing a fire-engine red shirt, Ryan Turell fits in here, a basketball superstar floating in a sea of Orthodox hoops fans who might worship him if it weren’t against their religion.

It’s the annual Sarachek high school basketball tournament, hosted by Yeshiva University in the same gymnasium where Turell made his name, first as a preternatural high school talent for the Valley Torah Wolfpack, and then as the greatest athlete in YU history. Since YU’s historic season ended, Turell has been training for the NBA draft in the L.A. area; he’s attempting to become the first Sabbath-observant Jew to play in the league. But he flew in for Sarachek and was a fixture at the games.

When he wasn’t firing up this year’s Wolfpack as an unofficial assistant coach, Turell was helping out everyone else. He played ball-boy during pre-game warmups. He manned the scorer’s table. He served as a keynote speaker for Sarachek players on Shabbat. And he never withheld a smile from the scores of photo-seeking fans who came to the Max Stern Athletic Center (known as “the MSAC”) hoping to get within breathing distance.

As a high schooler Turell never won Sarachek, which drew 24 Orthodox high schools from all over the U.S. and Montreal this year, and it’s become a funny footnote to an amateur athletic career that left little unconquered. But in a way, Sarachek won Turell. When I caught up with him after Valley Torah’s semifinal win over Torah Academy of Bergen County (TABC), he told me why he wouldn’t have gone to YU if not for the tournament. He also reflected on his YU career and spoke about his plans for the draft.

This interview — conducted on a brisk walk through Washington Heights — has been edited for length and clarity. Turell leans in on a Valley Torah huddle. By Jackson Krule

What’s it like being back in Washington Heights and seeing all the fans here? You’ve been taking a lot of pictures.

It’s pretty cool. It brings me back to how we felt during games and honestly, it feels like a time machine. It feels like just yesterday when I was playing in the tournament myself.

You told me earlier that you’re not sure you would have gone to YU if not for Sarachek. Why not?

So tell me about your preparation for the NBA draft. Are you working on any particular skills? Have you heard from scouts what they’d like to see from you?

Yeah, so obviously, you can never be a good enough shooter. So you know, just keep on knocking down shots and being able to quicken my release and get the shot off against bigger, stronger, faster players. Then get into the best shape of my life. I’m trying to make sure my body’s right, and able to take the hits and you know, stay with it and defend all these guys. And that’s what I got to do. Ryan Turell must have taken 100 of these over the course of the long weekend. Ryan’s older brother, Jack, photobombed this one. By Jackson Krule

You’ve been the go-to scorer for YU, but in the NBA, there aren’t many rookies who come in as the go-to scorer. So they often try to find a niche. Do you think of yourself as having a particular niche that you would fill as a role player at first, or how else are you pitching yourself to NBA teams?

You’ve talked about how you would walk to games if you made the NBA. Is there a rabbi who you look to for guidance on how to pursue this dream Jewishly to make sure that you’re staying within the lines of halacha?

A couple of rabbis — Rabbi Stulberger from Valley Torah, and Rabbi Ciment from YU are my go-to guys.

Playing on Shabbat in the NBA is different from college because by playing you would be working for a paycheck. Is there a halachic way around that, and have you talked to those rabbis about that at all?

[Note: Rabbi Aharon Ciment, in an email to the Forward, said, “Ryan is the best young man out there though I never gave permission to play on Shabbos in any way . All blessing for the week comes from making the Shabbos holy.”]

Now that your time at YU is winding down: What do you think you’ve accomplished in your four years here?

YU’s Turell dishes on Macs career, Sarachek, and preparing for the NBA draft