‘I have people who support me’: How a Ukrainian refugee found shelter at an Auschwitz education center 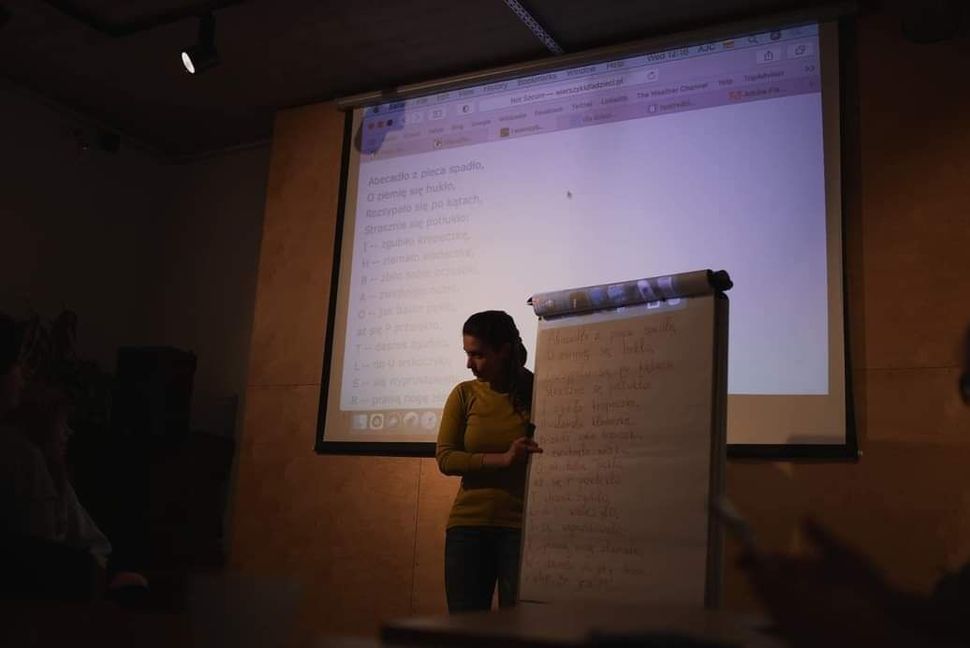 Oksana Naumchuk was supposed to host friends visiting from Poland in her Kyiv apartment this May. All she had to do before then: Finish renovating her kitchen.

Naumchuk, 26, is one of an estimated 4.4 million refugees to leave Ukraine since Russia’s invasion of the country in late February. Among all their stories, hers stands out for where she has found shelter: For the past month, Naumchuk has been living at the International Youth Meeting Centre (IYMC) in Oświęcim, Poland, a youth education center located about a mile from the former Auschwitz concentration camp.

In a surreal instance of historical inversion, the IYMC, which seeks to preserve memories of World War II and the Holocaust, opened its doors in early March to refugees fleeing a present-day war.

More than 1,000 refugees came and went. Now, Naumchuk is the last one living at the center. She works nearby in a museum based in the former home of a late Holocaust survivor, Shimson Kleuger, once known as “the last Jew in Auschwitz.”

The IYMC has “always been a messenger of life and hope against the reality of deaths not so far from this place,” said Christoph Heubner, a board member of the center’s foundation and the executive vice president of the International Auschwitz Committee.

In the 1980s, Heubner helped build the IYMC, inspired by his work with Holocaust survivors, which was in turn inspired by the teaching of his father — a soldier who became a priest after WWII — to “do everything that a war will never occur.”

“I had a task: To keep my brother and the dog safe”

60 years ago, in 1962 — 17 years after the end of the Holocaust — Kleuger returned to Oświęcim, moving back into the house where his Hasidic family once lived. All of the city’s other surviving Jews, he found, had left for either the U.S. or Israel.

When Kleuger died in 2000, his house was donated to the Auschwitz Jewish Center, a non-governmental organization that aims to remember Oświęcim’s Jewish community. In 2014, the center converted Kleuger’s house into a cafe, where visitors are taught about the city’s past and about the dangers of antisemitism and other forms of prejudice and intolerance. 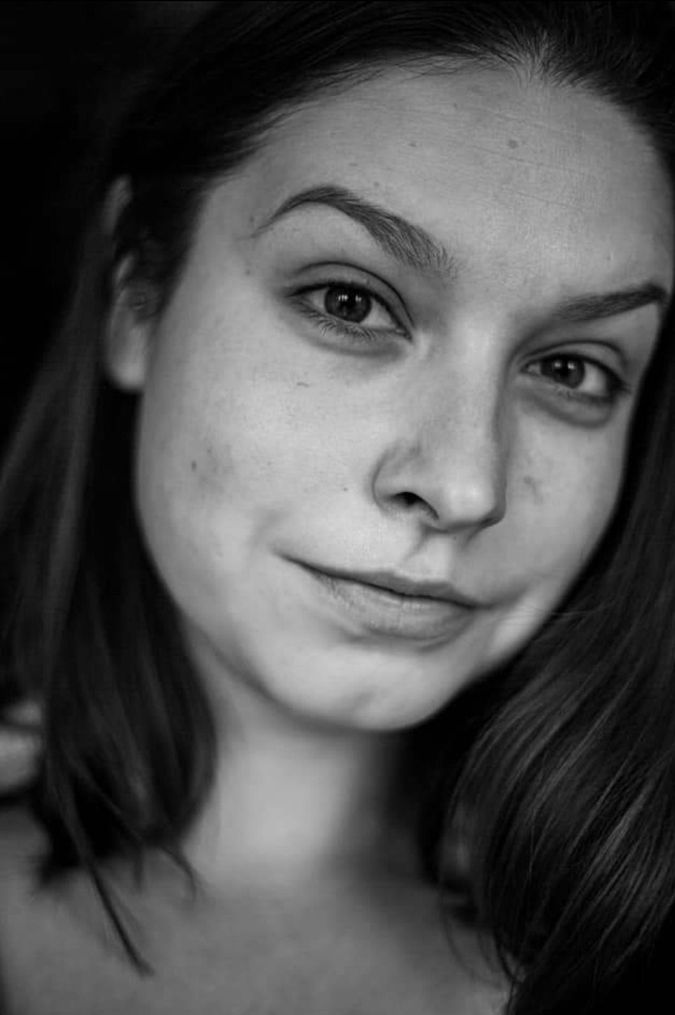 Of the 1000 Ukrainians who stayed at the International Youth Meeting Centre, Naumchuk is the last to remain. Photo by Oksana Naumchuk

Naumchuk had volunteered with the Auschwitz Jewish Center between September 2017 and August 2018, after her last year of university. She had studied journalism, but realized late in her studies that she didn’t want to be a journalist, and so she applied to various volunteer projects abroad.

She wanted to work across populations — not just with children, say, or the elderly. Among her options, she said, the Auschwitz Jewish Center stood out.

“I’m not Jewish, and I don’t have any connection with Jews,” she said, “but it was really interesting for me to work at the museum, to learn the history and to meet new people.”

When war began in February, Naumchuk’s friends from the Auschwitz Jewish Center — the same friends who were supposed to visit her in May — reached out to the IYMC’s director, Leszek Szuster, asking if, should she escape Kyiv, she could live there for a time.

Meanwhile, Naumchuk’s 15-year-old brother and the family dog were in her hometown of Zhytomyr — about 100 miles west of Kyiv. Naumchuk’s parents, on vacation in Egypt, worried. Her mother would often call her in tears. And so, on Feb. 24, Naumchuk left for Zhytomyr to meet up with her brother, and, together, leave the country.

“I can’t say that I was really nervous,” said Naumchuk. “I had a task: To keep my brother and the dog safe. And I just did it.”

With so many people trying to leave Kyiv, the roads were blocked, and so she walked two hours by foot before finding a family to hitch a ride with.

Soon after she made it home, she and her brother decided to leave Zhytomyr. They found volunteers headed to the border and on March 3, they — and the dog — arrived in Oświęcim.

The IYMC, which has about 100 beds on site, usually reserved for visiting students, was preparing to provide a steady stream of refugees with food and shelter. Keeping that mission in mind was helpful for Naumchuk, who before the war worked for a company that produces strollers, furniture and other rehabilitation equipment for disabled children, she said.

While her brother was afraid to go abroad for an uncertain amount of time, and particularly nervous to leave behind his computer, her knowledge that she could be useful to the efforts to aid her fellow refugees in Oświęcim kept her from being too stressed.

Within days of arriving in her new temporary home, she began using the cafe in Kleuger’s former house to teach Polish to Ukrainian refugees, sometimes as many as 160 at a time — the number fluctuates as refugees come and go. Next to the cafe is a museum, as well as the Oświęcim Synagogue, which bears the formal name of Khevre Loymdei Mishnayos — in English, the Association of Those Who Study Mishna.

“Before the Second World War and right now, it works kind of similarly,” said Naumchuk, who finds comfort in the fact that, despite the tragedy of war, “the area is still working as a place where people can come to study.”

But for Naumchuk, who isn’t herself Jewish, the historical parallels stop there, even though her situation may draw comparisons to those who sought to flee the Nazis in WWII.

“How can I comment on things,” she asked, “which I haven’t seen with my eyes?”

“You have to live your life in a safe place”

Naumchuk’s parents joined her and her brother in Oświęcim at the beginning of March, but her father quickly returned to Ukraine. As a doctor, she said, he was needed, and he felt like he couldn’t sit back and watch.

On April 3, her mother, brother and dog also returned to Zhytomyr, which last month witnessed intense daily bombings. They’re happy to be back home, she said.

Naumchuk plans to stay in Oświęcim for the foreseeable future. Even though Russian forces have withdrawn from Kyiv and some of the 1.4 million residents who have so far fled the city are returning, Mayor Vitali Klitschko is warning them not to come back — at least not yet.

And a friend of hers, a soldier, told her, “You have to live your life in a safe place.”

Better to stay away, he said, and come back “with new, useful knowledge, when it will be safe in Ukraine.”

“I trust him,” Naumchuk said, “and I feel more useful being abroad.” While she has no official job title, she joked that she is “manager of the Ukrainians in Oświęcim.” 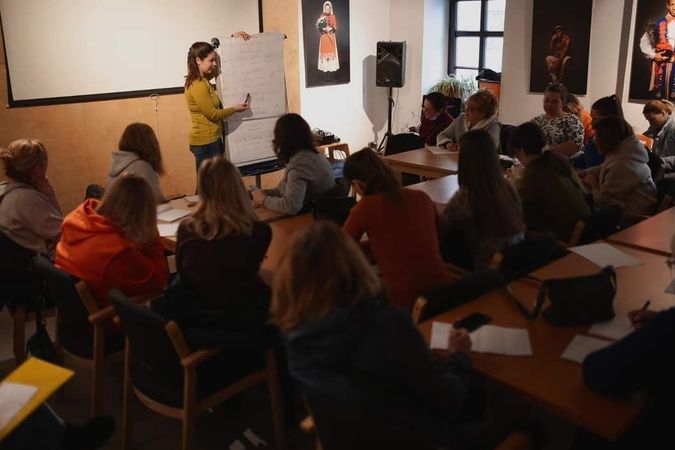 She feels responsible for her students. She accompanies Ukrainians to the hospital, acting as a translator, and also helps them fill out documents and navigate public transportation.

“When they meet someone in a new place who speaks their language and knows the place, they feel more comfortable and more safe,” she said. “They found a person they can trust.”

And yet, she emphasized, things could be worse.

“I am alive, I have food to eat, I have a place to sleep, I have clothes, I have people who support me,” she said. “Right now, I am okay. What will be next? I don’t know.”

‘I have people who support me’: How a Ukrainian refugee found shelter at an Auschwitz education center