In L.A., a new exhibit on the American deli reveals some Jewish truths 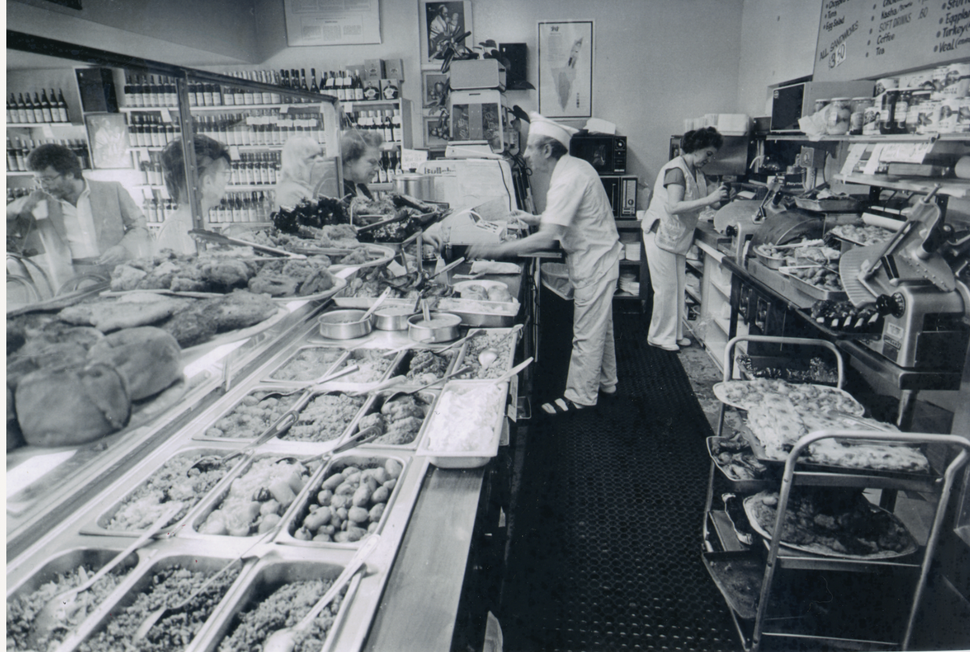 In the 1930s, there were 5,000 delicatessens in New York City. By way of comparison, Starbucks, which seems to be on every street corner, has 241 outlets in New York.

And those delis were much more than just places to get coffee or a pastrami. “I’ll Have What She’s Having,” a new exhibit at the Skirball Cultural Center in Los Angeles, explains that delis were how a generation of Jewish immigrants acculturated to America, and how America grew to accept and understand those immigrants.

“Even as deli has come to symbolize tradition, it’s actually a story of change,” Lara Rabinovitch, the exhibit’s co-curator, told me.

The exhibit is compact. The bad news is it doesn’t smell or sound like a deli, and, given all the photos and memorabilia, you will find yourself hungry and wishing you could just order off one of the historic menus on display.

The good news is the Skirball gift shop is now stocking Cel-Ray sodas and artisanal mustards, and, anyway, you’re there to learn, not eat. 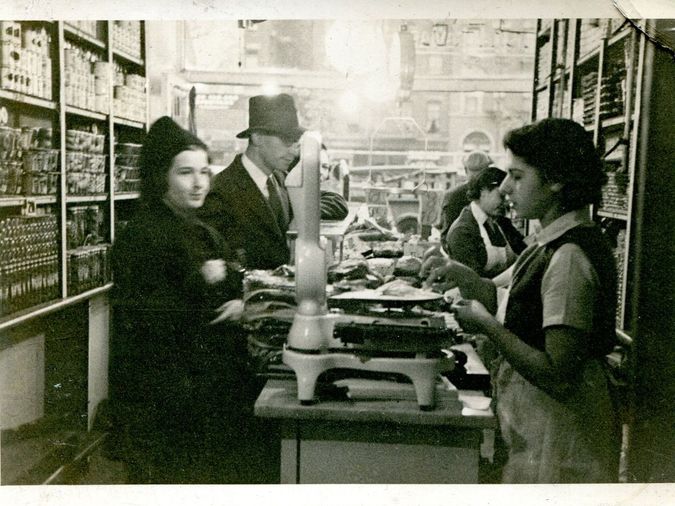 The exhibit is a kind of black-and-white cookie, dividing its presentation between pure nostalgia and deeper meaning. That’s very on brand for the Skirball, an institution founded to explore the connections between Jewish culture and American democracy.

So, the exhibit begins with a display of a battered leather suitcase and a shiny old kosher butcher knife, relics brought by one of the two million Jewish immigrants who flooded into the country between 1880-1924.

Often met with racism and anti-immigrant sentiment, the newcomers sought to earn a living serving foods from their native Eastern and Central Europe: bagels, bialys, knishes, smoked meats and fish.

The exhibition, Rabinovitch said, is grounded in the history of immigration.

“Sadly, over a century later it continues to be a divisive issue in this country, despite the obvious riches — culinary or otherwise — newcomers bring wherever they go,” said Rabinovitch, a food anthropologist who did her doctoral dissertation on pastrami.

The businesses gave Jewish immigrants an economic foothold in the new land. A photo of a young Anne Russ serving customers behind a deli counter in 1939 tells the story best: Joel Russ began selling pickles out of a barrel in 1907, then graduated to a pushcart before opening his first store, featuring smoked fish as well as pickles, in 1914. His three daughters, Hattie, Ida, and Anne, worked in the store from the time they were 11 or 12 years old. In 1935, he renamed the store Russ & Daughters, making his daughters partners in the business, which today has multiple outposts, cookbooks, and an upcoming TV series based on its story.

One big reason for the success: the delicacies that Russ & Daughters and other delis sold didn’t necessarily have Jewish origins but became popular with non-Jewish Americans as well.

By the 1930’s the deli was ubiquitous in New York, a social and economic force as much as a culinary one. One display shows a packed meeting of the Mogen David Delicatessen Owners’ Association, which published a magazine — also on display — that covered union matters and local politics in Yiddish and English.

A newsletter from the Local 338 Bagel Makers Union shows that the immigrants’ politics were as strongly wedded to the deli as poppy seeds to a bagel. The union’s entire membership spoke Yiddish.

To help visitors understand what these places served, there’s also Japanese sampuru — plastic recreations like those outside sushi bars — of pastrami on rye, bagels and lox and other dishes. A glass seltzer bottle rests on a pedestal in a display case nearby. (You half expect to see a sign, “In case of comedy, break glass.”)

As Jews spread to the suburbs, so did delis. There are matchbooks, menus, signs and waitress uniforms from the heyday of delis across the country: Manny’s in Chicago, Wolfie’s in Miami. Goldman’s in Atlantic City.

A display case holds a lox slicing knife from the now-closed Glassman’s Deli in L.A., its blade worn down to the size of a sewing needle: if knives could talk, imagine the complaints that one heard.

As its title suggests, the exhibit does a deep, fun dive into the deli’s impact on popular culture. There’s an actual World War II era Katz’s Delicatessen ad imploring parents to “Send a salami to your boy in the army,” and a photo wall of politicians stopping by delis to campaign. There’s President Barack Obama shaking hands at Canter’s in 2014 and Sen. Ted Cruz politicking at Shapiro’s in Indianapolis: delis are a bipartisan pandering ground.

Finally, there is a video compilation of famous TV and movie deli scenes — from “Mad Men,” “Curb Your Enthusiasm,” and “Seinfeld” — finishing with the eponymous deli scene in “When Harry Met Sally” where Meg Ryan demonstrates, loudly, how a woman can fake ecstasy.

The sound is muted and her moaning is subtitled, but her face says it all: she either just had sex, or she just bit into a warm chocolate rugelach. 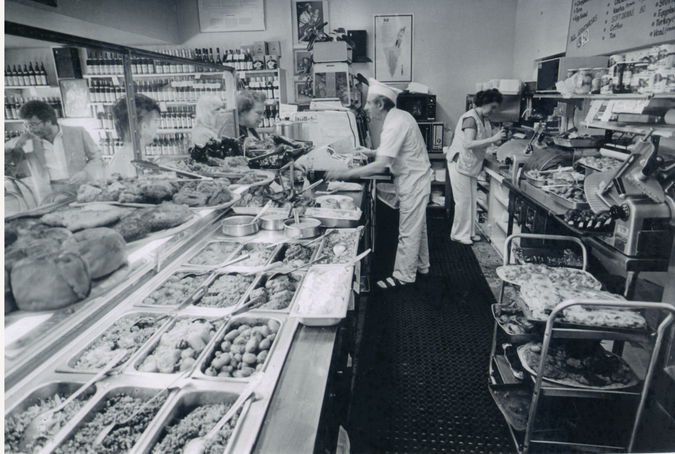 The exhibit touches on the struggles older delis have faced, and nods to the rise of the “New Delis,” which feature smaller menus and artisanal ferments, house-smoked fish and hand-rolled bagels — much closer, in fact, to what Joel Russ sold out of his pushcart.

There may be a lesson there for the future of American Judaism, as well. Institutions and people come and go, but as long as you find a way to provide comfort and community, the customers will keep coming back.

In L.A., a new exhibit on the American deli reveals some Jewish truths