A US soldier sent home bones from Dachau. They’ve just been buried in a Jewish cemetery

The remains have been hidden since the Holocaust. No one knows who they belong to The burial of the remains of an unknown person or persons taken from Dachau were buried in a Jewish cemetery in Washington, D.C., on Dec. 18, 2022. Courtesy of Rabbi Aaron Alexander/Facebook 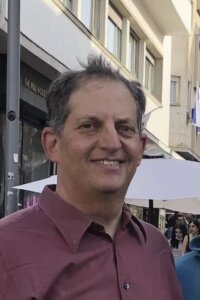 More than 77 years after American soldiers liberated Dachau, the unidentified remains of at least one of its victims were buried this week in a Jewish family’s plot in Washington, D.C.

The unusual ceremony brought together about a dozen attendees, including the daughter and son-in-law of the non-Jewish U.S. Army soldier who sent the bones home to his wife in 1946.

That soldier was Sgt. Willard N. Maddox. On one of the two small envelopes he mailed to his wife in Kensington, Maryland, on April 8, he wrote: “Human bones from the crematory of the Dachau concentration camp, Germany (pronounced DAKOW).” In a letter he sent to her two days later, he listed the bones among the other items in the package he had just sent, which included perfume, a rosary, some Italian money and postcards.

For decades the bones remained hidden. Maddox likely forgot about them while busy raising a family and working as a fingerprint analyst for the FBI, said Betty Behnke, Maddox’s daughter.

Many of the questions surrounding the bones are likely to remain unanswered. Whose bones are these? How did Maddox come into their possession? Why did he send them to his home? And did he have any plans for them?

But the last chapter in the story came, if not to a satisfying ending on Sunday, then to one in which Maddox’s family and the Jews they reached out to can take some solace. The burial of the bones was a solemn affair that included an apology from a man of German descent who took no part in the horror of the Holocaust, but made it his mission to make sure that they had a dignified — and Jewish — funeral.

“The Behnke family understood that these bones had to be treated with care, that these bones are connected to a soul [and] lived in this world,” said Rabbi Aaron Alexander, who presided at the burial.

Dachau, in southern Germany, was the Nazis’ first concentration camp and included two crematoria. According to Yad Vashem, more than 30,000 people died there before American soldiers freed the remaining prisoners in April 1945.

Maddox, according to his family, was a quiet man who said little about his military service except that he chauffeured officers around in jeeps. He died in 2000.

His daughter speculated that an official at Dachau, a guide perhaps, had given the bones to her father. He “must’ve been touched by whatever he saw or heard,” she said, “or he wouldn’t have saved them.”

After Maddox’s death, it would be nearly 20 more years before his daughter’s husband, Jerral Behnke, discovered the bones in an envelope in a workbench that used to belong to his father-in-law.

Jerral Behnke said he knew from the moment he found them that the remains should be placed under the care of Jews.

Working for 50 years in the U.S. Navy’s Hospital Corps, he said, “My job was to save lives, not to take them. My father always taught me to do the right thing. The right thing to do was to see how we could get [the remains] buried in an appropriate place.”

He contacted national and local Jewish organizations to ask what to do with the remains, but said that none expressed interest in assisting.

So Behnke then reached out to Fran Margolis, a Jewish friend of his daughter. She also happens to be an archaeologist who specializes in identifying human and animal remains, a fact Behnke did not know when he called her.

“He was crying on the phone, really upset by it all,” Margolis recalled of their initial conversation. “I really wanted to help him.”

A member of Washington’s Adas Israel Congregation, Margolis arranged for the remains to be interred in her family’s plot in the synagogue’s cemetery in the District’s southeast quadrant.

She purchased a wooden urn with a Star of David to hold the bones, but wished to entrust the burial to the Behnkes. So she left the box with them on a recent visit.

Studying the remains, Margolis said she determined that all 20 bone fragments were human.

But the number of people from whom the remains came is unknowable, as is their gender, she said, without performing tests that would have damaged the bones.

The Behnkes and two of their adult children attended Sunday’s burial. So did Margolis, her parents, husband and children. The rabbi, Alexander, in a Facebook post, called it a meyt mitzvah, a funeral for “the souls who could have been those remains,” and described it as much the same as a burial for a person whose identity is known, and who is mourned by family.

“Psalms, Torah, Eulogies, El Malei, shoveling earth, Kaddish, all of it,” the rabbi wrote, naming the elements of a Jewish funeral.

But the funeral also included an apology, from Jerral Behnke, the soldier’s son-in-law. He shared “deeply emotional words of remorse on behalf of his German heritage,” Alexander wrote.

Also present at the funeral, in a way, was the soldier himself. A framed photograph of him leaned against a gravestone that’s part of the Margolis family plot. As is the custom at many Jewish burials, each attendee, including Margolis’ young children, shoveled dirt into the grave when the remains were buried.

Margolis was struck, she said, when she first entered the cemetery on Sunday, by both the beauty and oddity of the occasion.

“This was a funeral, but for who?” she wondered.

But before she left, she looked at her family’s seven gravestones — grandparents, great-grandparents, two uncles and an aunt — and said she told the deceased relatives “to take care” of the newly interred remains.

“I came to the conclusion: This is the right place for them.”

CORRECTION: The original version of this story stated that Maddox got the bones in 1946 and that he had been in Dachau at the time of the liberation. This version removes those assertions to show that Maddox mailed the bones home in 1946, but exactly when he acquired the bones, and whether, or when, he might have been at Dachau, is unknown.

A US soldier sent home bones from Dachau. They’ve just been buried in a Jewish cemetery