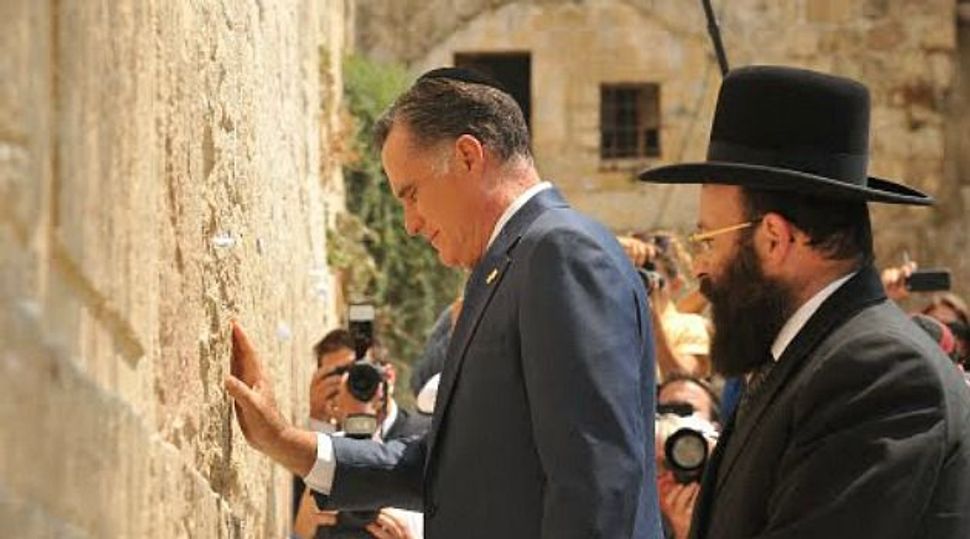 Silent Prayer: After praying at the Western Wall, Mitt Romney prepared for a policy speech in jerusalem. Image by Western Wall Heritage Foundation

Finished with his prayers, at the Western Wall, Mitt Romney is now gearing up for his charm offensive. This evening he will give a policy address in Jerusalem, in which he looks set to send out a message that he’s on the same page as Israelis.

The speech will apparently be entitled Our Enduring Alliance, and focus on democratic values, defense, and security. “Our two nations are separated by more than 5,000 miles. But for an American abroad, you can’t get much closer to the ideals and convictions of my own country than you do in Israel,” he is scripted to say. “We’re part of the great fellowship of democracies. We speak the same language of freedom and justice, and the right of every person to live in peace. We serve the same cause and provoke the same hatreds in the same enemies of civilization.”

He will then declare: “It is my firm conviction that the security of Israel is in the vital national security interest of the United States. And ours is an alliance based not only on shared interests but also on enduring shared values.”

He will mention events and names with emotional significance to Israelis, including the Holocaust and the late Israeli Prime Minister Menachem Begin. “When Iran’s leaders deny the Holocaust or speak of wiping this nation off the map, only the naïve — or worse — will dismiss it as an excess of rhetoric,” he is expected to say. “Make no mistake: the ayatollahs in Tehran are testing our moral defenses. They want to know who will object, and who will look the other way.

“My message to the people of Israel and the leaders of Iran is one and the same: I will not look away; and neither will my country. As Prime Minister Begin put it, in vivid and haunting words, ’if an enemy of [the Jewish] people says he seeks to destroy us, believe him.’”

Romney will argue against those who say that attacking Iran would be irresponsible, saying that preventing Iran from getting nuclear weapons “must be our highest national security priority,” and say: “I want to pause on this last point. It is sometimes said that those who are the most committed to stopping the Iranian regime from securing nuclear weapons are reckless and provocative and inviting war.”