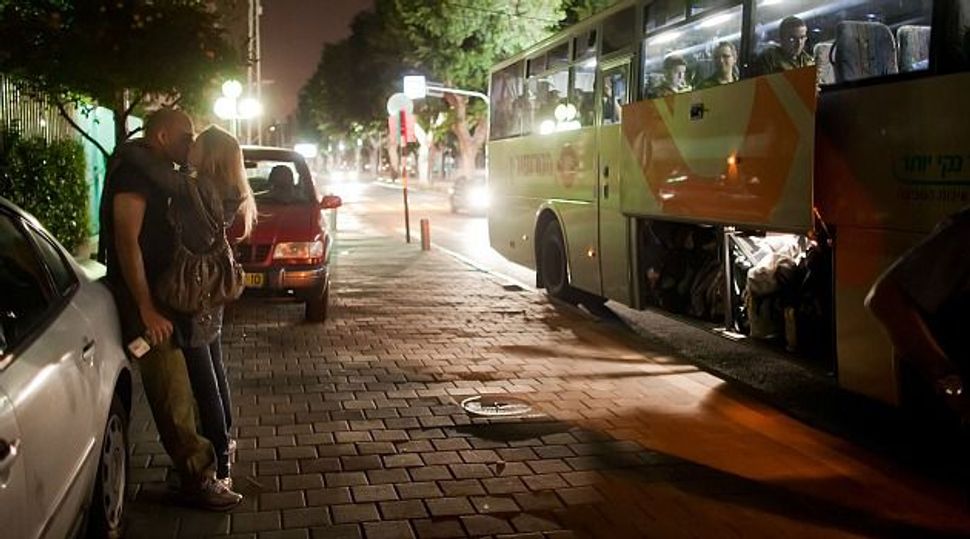 One Last Kiss: An Israeli reservist kisses his girlfriend as he prepares to report for duty amid fears of a wider war in Gaza. Image by getty images

Israel’s cabinet authorised the mobilisation of up to 75,000 reservists late on Friday, preparing the ground for a possible Gaza invasion after Palestinians fired a rocket toward Jerusalem for the first time in decades.

Tel Aviv, Israel’s commercial centre, also came under rocket attack for the second straight day, in defiance of an Israeli air offensive that began on Wednesday with the declared aim of deterring Hamas from launching cross-border attacks that have plagued southern Israel for years.

Hamas, the Islamist group that runs the Gaza Strip, claimed responsibility for firing at Jerusalem and Tel Aviv. Israel said the rocket launched toward Jerusalem landed in the occupied West Bank, and the one fired at Tel Aviv did not hit the city. There were no reports of casualties.

The siren that sounded in Jerusalem stunned many Israelis. The city, holy to Jews, Muslims and Christians, was last struck by a Palestinian rocket in 1970, and it was not a target when Saddam Hussein’s Iraq fired missiles at Israel in the 1991 Gulf War.

Prime Minister Benjamin Netanyahu held a four-hour strategy session with a clutch of senior ministers in Tel Aviv on widening the military campaign, while other cabinet members were polled by telephone on raising the mobilisation level.

Political sources said they decided to more than double the current reserve troop quota set for the Gaza offensive to 75,000. The move did not necessarily mean all would be called into service.

Hours earlier, Egypt’s prime minister, denouncing what he described as Israeli aggression, visited Gaza and said Cairo was prepared to mediate a truce.

Officials in Gaza said 29 Palestinians – 13 militants and 16 civilians, among them eight children and a pregnant woman – had been killed in the enclave since Israel began its air strikes. Three Israeli civilians were killed by a rocket on Thursday.

The Israeli military said 97 rockets fired from Gaza hit Israel on Friday and 99 more were intercepted by its Iron Dome anti-missile system. Dozens of Israeli bombing raids rocked the enclave, and one flattened the Gaza Interior Ministry building.

In a further sign Netanyahu might be clearing the way for a ground operation, Israel’s armed forces announced that a highway leading to the territory and two roads bordering the enclave of 1.7 million Palestinians would be off-limits to civilian traffic.

Tanks and self-propelled guns were seen near the border area on Friday, and the military said it had already called 16,000 reservists to active duty.

Netanyahu is favourite to win a January national election, but further rocket strikes against Tel Aviv, a free-wheeling city Israelis equate with New York, and Jerusalem, which Israel regards as its capital, could be political poison for the conservative leader.

“The Israel Defence Forces will continue to hit Hamas hard and are prepared to broaden the action inside Gaza,” Netanyahu said before the rocket attacks on the two cities.

Asked about Israel massing forces for a possible Gaza invasion, Hamas spokesman Sami Abu Zuhri said: “The Israelis should be aware of the grave results of such a raid, and they should bring their body bags.”

A solidarity visit to Gaza by Egyptian Prime Minister Hisham Kandil, whose Islamist government is allied with Hamas but also party to a 1979 peace treaty with Israel, had appeared to open a tiny window to emergency peace diplomacy.

Kandil said: “Egypt will spare no effort … to stop the aggression and to achieve a truce.”

But a three-hour truce that Israel declared for the duration of Kandil’s visit never took hold.

Israel Radio’s military affairs correspondent said the army’s Homefront Command had told municipal officials to make civil defence preparations for the possibility that fighting could drag on for seven weeks. An Israeli military spokeswoman declined to comment on the report.

The Gaza conflagration has stoked the flames of a Middle East already ablaze with two years of Arab revolution and a civil war in Syria that threatens to leap across borders.

It is the biggest test yet for Egypt’s new President Mohamed Mursi, a veteran Islamist politician from the Muslim Brotherhood who was elected this year after last year’s protests ousted military autocrat Hosni Mubarak.

Egypt’s Muslim Brotherhood are spiritual mentors of Hamas, yet Mursi has also pledged to respect Cairo’s 1979 peace treaty with Israel, seen in the West as the cornerstone of regional security. Egypt and Israel both receive billions of dollars in U.S. military aid to underwrite their treaty.

Mursi has vocally denounced the Israeli military action while promoting Egypt as a mediator, a mission that his prime minister’s visit was intended to further.

A Palestinian official close to Egypt’s mediators told Reuters Kandil’s visit “was the beginning of a process to explore the possibility of reaching a truce. It is early to speak of any details or of how things will evolve”.

Tunisia’s foreign minister was due to visit Gaza on Saturday “to provide all political support for Gaza” the spokesman for the Tunisian president, Moncef Marzouki, said in a statement.

The United States asked countries that have contact with Hamas to urge the Islamist movement to stop its rocket attacks.

Hamas refuses to recognise Israel’s right to exist. By contrast, Palestinian President Mahmoud Abbas, who rules in the nearby West Bank, does recognise Israel, but peace talks between the two sides have been frozen since 2010.

Abbas’s supporters say they will push ahead with a plan to have Palestine declared an “observer state” rather than a mere “entity” at the United Nations later this month.