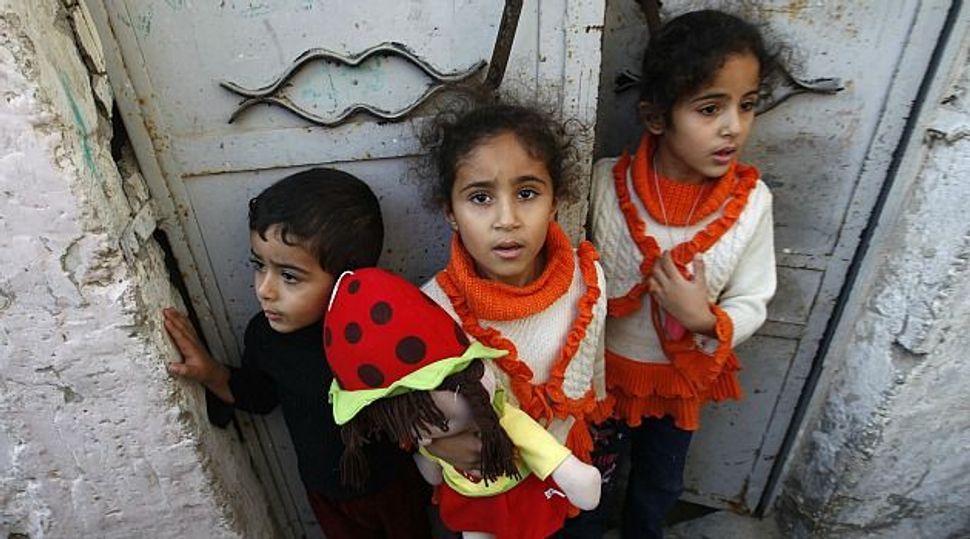 Hoping for Peace: Gaza Palestinians hoped for work of a deal as diplomats worked to broker a ceasefire and avoid an Israeli ground assault on Gaza. Image by getty images

The U.N. chief called for an immediate ceasefire in the Gaza Strip on Tuesday and U.S. Secretary of State Hillary Clinton headed to the region with a message that escalation of the week-long conflict was in nobody’s interest.

Egypt was trying to broker a truce between Israel and Gaza’s ruling Hamas movement. An Egyptian intelligence source said “there is still no breakthrough and Egypt is working to find middle ground”.

Israel’s military on Tuesday targeted about 100 sites in Gaza, including ammunition stores and the Gaza headquarters of the National Islamic Bank. Gaza’s Hamas-run Health Ministry said six Palestinians were killed.

Israeli police said more than 60 rockets were fired from Gaza by mid-day, and 25 of the projectiles were intercepted by Israel’s Iron Dome system. The military said an officer was wounded.

Some 115 Palestinians have died in a week of fighting, the majority of them civilians, including 27 children, hospital officials said. Three Israelis died last week when a rocket from Gaza struck their house.

In Cairo, U.N. Secretary-General Ban Ki-moon called for an immediate ceasefire and said an Israeli ground operation in Gaza would be a “dangerous escalation” that must be avoided.

He had held talks in Cairo with Arab League chief Nabil Elaraby and Egyptian Prime Minister Hisham Kandil before travelling to Israel for discussions with its leader, Benjamin Netanyahu. Ban planned to return to Egypt on Wednesday to see Egypt’s Islamist President Mohamed Mursi, who was unavailable on Tuesday due to the death of his sister.

Israel’s leaders weighed the benefits and risks of sending tanks and infantry into the densely populated coastal enclave two months before an Israeli election, and indicated they would prefer a diplomatic path backed by world powers, including U.S. President Barack Obama, the European Union and Russia.

The White House said Clinton was going to the Middle East for talks in Jerusalem, Ramallah and Cairo to try to calm the conflict. An Israeli source said she was expected to meet Netanyahu on Wednesday.

Netanyahu and his top ministers debated their next moves in a meeting that lasted into the early hours of Tuesday.

“Before deciding on a ground invasion, the prime minister intends to exhaust the diplomatic move in order to see if a long-term ceasefire can be achieved,” a senior Israeli official, speaking on condition of anonymity, said after the meeting.

A delegation of nine Arab ministers, led by the Egyptian foreign minister, was due in Gaza later on Tuesday in a further signal of heightened Arab solidarity with the Palestinians.

Any diplomatic solution may involve Egypt, Gaza’s other neighbour and the biggest Arab nation, where the ousting of U.S. ally Hosni Mubarak and the election of Mursi is part of a dramatic reshaping of the Middle East wrought by Arab uprisings and now affecting the Israeli-Palestinian conflict.

Mursi, whose Muslim Brotherhood was mentor to the founders of Hamas, on Monday took a call from Obama, who told him Hamas must stop rocket fire into Israel – effectively endorsing Israel’s stated aim in launching the offensive last week. Obama also said he regretted civilian deaths – which have been predominantly among the Palestinians.

“The two leaders discussed ways to de-escalate the situation in Gaza, and President Obama underscored the necessity of Hamas ending rocket fire into Israel,” the White House said, adding that the U.S. leader had also called Netanyahu.

“In both calls, President Obama expressed regret for the loss of Israeli and Palestinian civilian lives.”

Mursi has warned Netanyahu of serious consequences from a ground invasion of the kind that killed more than 1,400 people in Gaza four years ago. But he has been careful not to alienate Israel, with whom Egypt’s former military rulers signed a peace treaty in 1979, or Washington, a major aid donor to Egypt.

Egypt’s Kandil told Reuters a ceasefire was possible: “I think we are close, but the nature of this kind of negotiation, (means) it is very difficult to predict.”

After Hamas leader Khaled Meshaal laid out demands in Cairo that Israel take the first step in restoring calm, and warned Netanyahu that a ground war in Gaza could wreck his re-election prospects in January, a senior Israeli official denied a Hamas assertion that the prime minister had asked for a truce.

“Whoever started the war must end it,” Meshaal said, referring to Israel’s assassination from the air on Wednesday of Hamas’s Gaza military chief, a move that followed a scaling up of rocket fire onto Israeli towns over several weeks and attacks against Israeli troops along the border.

An official close to Netanyahu told Reuters: “We would prefer to see a diplomatic solution that would guarantee the peace for Israel’s population in the south. If that is possible, then a ground operation would no longer be required.”

Fortified by the ascendancy of fellow Islamists in Egypt and elsewhere, and courted by Sunni Arab leaders in the Gulf keen to draw the Palestinian group away from old ties to Shi’ite Iran, Hamas has tested its room for manoeuvre, as well as longer-range rockets that have reached the Tel Aviv metropolis.

Hamas said four-year-old twin boys had died with their parents when their house in the town of Beit Lahiya was struck from the air during the night. Neighbours said the occupants were not involved with militant groups.

Israel had no immediate comment on that attack. It says it takes extreme care to avoid civilians and accuses Hamas and other militant groups of deliberately placing Gaza’s 1.7 million people in harm’s way by placing rocket launchers among them.

Nonetheless, fighting Israel, whose right to exist Hamas refuses to recognise, is popular with many Palestinians and has kept the movement competitive with the secular Fatah movement of Palestinian President Mahmoud Abbas, who remains in the West Bank after losing Gaza to Hamas in a civil war five years ago.

“Hamas and the others, they’re our sons and our brothers, we’re fingers on the same hand,” said 55-year-old Faraj al-Sawafir, whose home was blasted by Israeli forces. “They fight for us and are martyred, they take losses and we sacrifice too.”

In scenes recalling Israel’s 2008-2009 winter invasion of the coastal enclave, tanks, artillery and infantry have massed in field encampments along the sandy, fenced-off border.