Gaza Says ‘Thank You’ to Iran 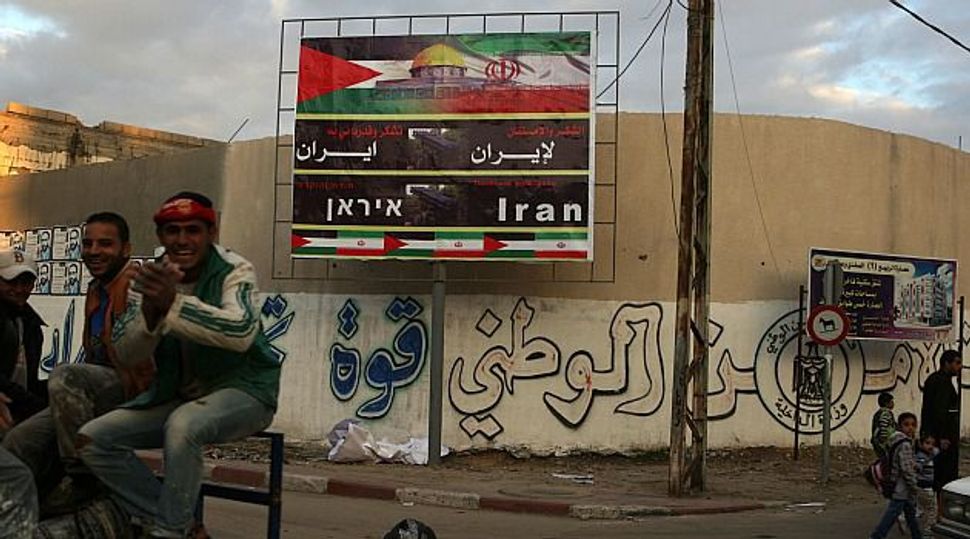 Thank You, Tehran! Billboards in Gaza thank Iran for backing the Palestinian enclave in its conflict with Israel. Image by getty images

Gazans offered very public thanks to Iran on Tuesday for helping them in this month’s fight against Israel, when Iranian-made missiles were fired out of the Palestinian enclave towards Jerusalem and Tel Aviv.

“Thank you Iran”, said large billboards on three major road junctions in the Gaza Strip – the first time there has been such public acknowledgement of Iran’s role in the arming of Islamic militants in the tiny territory.

The message was written in Arabic, English, Hebrew and Farsi. The posters also depicted the Iranian Fajr 5 rockets that were used for the first time to target Israel’s two largest population centres. No one was injured in the attacks.

The billboards were not signed, but a senior official with the militant group Islamic Jihad, Khader Habib, said it was only natural to show gratitude for Iran’s role in the conflict.

“Iranian rockets struck at Tel Aviv. They reached out to Jerusalem. Therefore it was our duty to thank those who helped our people,” he told Reuters.

“We have distinctive, good relations with Iran and such a relationship will continue as long as Iran supports the Palestinian people and backs up the resistance,” he added.

Israel launched an air offensive on Nov. 14 with the stated aim of stopping Gaza militants from firing rockets at its southern towns and cities.

Israel has always asserted that arch-foe Tehran supplied Gaza with weapons, but until the latest conflict both Iran and Gaza’s dominant Islamist group Hamas had side-stepped the issue, acknowledging only financial backing and warm political ties.

During the eight-day conflagration, the Iranian speaker of parliament, Ali Larijani, said Iran was “honoured” to have provided Gaza with military aid. Following the ceasefire, Hamas leader Khaled Meshaal thanked Iran for arms and funding.

The public statements appeared aimed at dispelling speculation that the mainly Sunni Muslim Gaza Strip was shutting the door on Shi’ite Iran and turning instead to neighbouring Egypt for support and protection.

Israeli analyst Meir Javedanfar said he thought the Iranians would regret telling the world they supplied Hamas with arms.

“Now that such high-ranking officials openly admit to having supplied weapons to groups in Gaza, the job of isolating Iran will be even easier than before,” said Javedanfar, an Iranian expert at the Interdisciplinary Center (IDC) in Herzliya.

Israel and many Western countries say Iran is developing nuclear weapons and have imposed increasingly stringent sanctions on the Islamic Republic to get it to halt its uranium enrichment drive. Tehran says its atomic programme is peaceful.

Hamas, which has ruled Gaza since 2007, refuses to recognise Israel’s right to exist and is shunned as a terrorist organisation by the United States and the European Union.

Gaza Says ‘Thank You’ to Iran