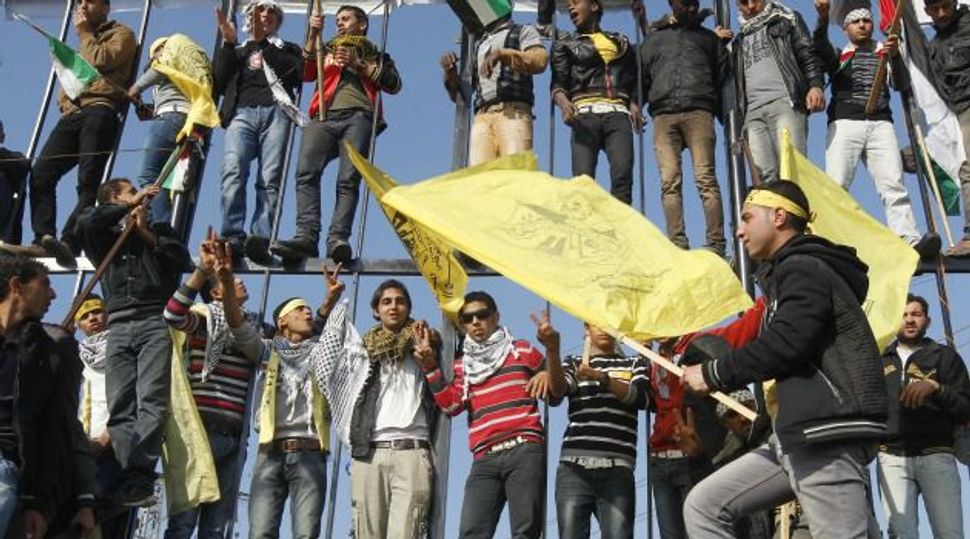 Fatah Force: Gaza Palestinians hold first rally for the Fatah faction in five years since Hamas seized control of the enclave in a bloody takeover. Image by Getty images

President Mahmoud Abbas predicted the end of a five-year split between the two big Palestinian factions as his Fatah movement staged its first mass rally in Gaza with the blessing of Hamas Islamists who rule the enclave.

“Soon we will regain our unity,” Abbas, whose authority has been limited to the Israeli-occupied West Bank since the 2007 civil war between the two factions, said in a televised address to hundreds of thousands of followers marching in Gaza on Friday, with yellow Fatah flags instead of the green of Hamas.

The hardline Hamas movement, which does not recognise Israel’s right to exist, expelled secular Fatah from Gaza during the war. It gave permission for the rally after the deadlock in peace talks between Abbas’s administration and Israel narrowed the two factions’ ideological differences.

The Palestinian rivals have drawn closer since Israel’s assault on Gaza assault in November, in which Hamas, though battered, claimed victory.

Egypt has long tried to broker Hamas-Fatah reconciliation, but past efforts have foundered over questions of power-sharing, control of weaponry, and to what extent Israel and other powers would accept a Palestinian administration including Hamas.

An Egyptian official told Reuters Cairo was preparing to invite the factions for new negotiations within two weeks.

The demonstration marked 48 years since Fatah’s founding as the spearhead of the Palestinians’ fight against Israel. Its longtime leader Yasser Arafat signed an interim 1993 peace accord that won Palestinians a measure of self rule.

Hamas, which rejected the 1993 deal, fought and won a Palestinian parliamentary election in 2006. It formed an uneasy coalition with Fatah until their violent split a year later.

Though shunned by the West, Hamas feels bolstered by electoral gains for Islamist movements in neighbouring Egypt and elsewhere in the region – a confidence reflected in the fact Friday’s Fatah demonstration was allowed to take place.

“The success of the rally is a success for Fatah, and for Hamas too,” said Hamas spokesman Sami Abu Zuhri. “The positive atmosphere is a step on the way to regain national unity.”

Fatah, meanwhile, has been riven by dissent about the credibility of Abbas’s statesmanship, especially given Israel’s continued settlement-building on West Bank land. The Israelis quit Gaza unilaterally in 2005 after 38 years of occupation.

“The message today is that Fatah cannot be wiped out,” said Amal Hamad, a member of the group’s ruling body, referring to the demonstration attended by several Abbas advisers. “Fatah lives, no one can exclude it and it seeks to end the division.”

In his speech, Abbas promised to return to Gaza soon and said Palestinian unification would be “a step on the way to ending the (Israeli) occupation”.