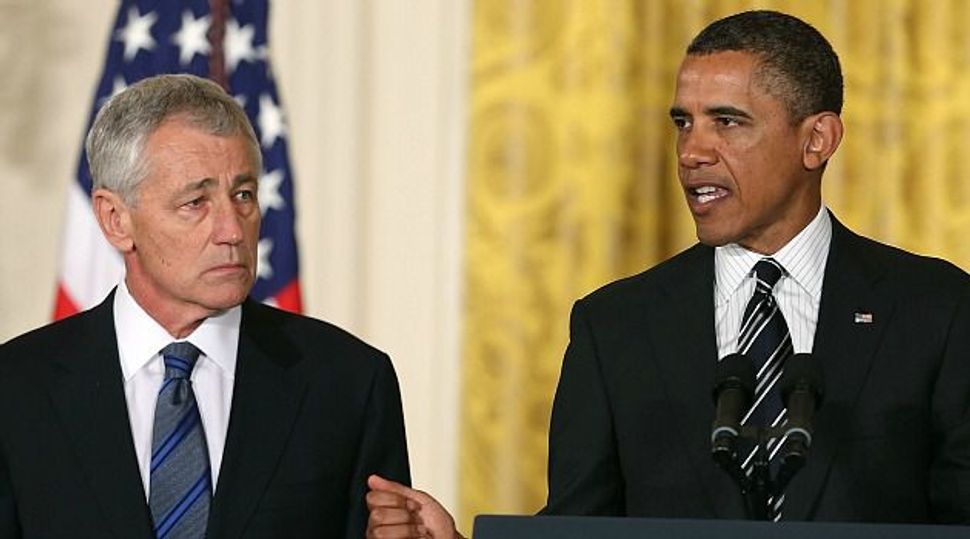 Clearing the Air: Pentagon nominee Chuck Hagel spoke to lawmakers to clarify his views on the Mideast and Iran. Image by getty images

The decorated Vietnam veteran’s Republican credentials have done little to rally support with his party, which he publicly split with as a senator by opposing the Iraq war during the Bush administration.

Hagel’s private calls to lawmakers and efforts by supporters to defend him publicly are part of what is likely to be a hard-fought battle over his nomination. Opponents tried for weeks to dissuade Obama from choosing the former Nebraska senator.

One prominent senator, Republican Lindsey Graham of South Carolina, predicted even before his nomination that Hagel, if confirmed, would be “the most antagonistic secretary of defense towards the State of Israel in our nation’s history.”

U.S. officials who have spoken with Hagel since he was nominated on Monday say he has been calling senators before confirmation hearings begin in the coming weeks. Current and former U.S. officials say he is particularly concerned with portrayals of his record on Iran. Critics accuse him of opposing sanctions and being satisfied with containing Tehran, as opposed to preventing it from obtaining a nuclear weapon.

“He feels that who he is, what he stands for and what his attitudes are have been misrepresented and distorted,” said Dennis Ross, a former top Obama Middle East adviser.

“What he said to me very clearly was that … he deeply believes that Iran does need to be prevented from having the bomb and that he doesn’t believe in containment.”

By tradition, Cabinet nominees are expected to avoid public comment until their confirmation hearings.

Republican Senator John Cornyn of Texas, in an opinion piece entitled “Why I Can’t Support Hagel,” accused Hagel of failing to understand the threat from Iran and groups like Hamas.

One U.S. official who is familiar with the information Hagel is providing to members of the Senate defended Hagel’s approach to the militant groups Hezbollah and Hamas. As a senator, Hagel decided not to join 88 other senators in a 2006 letter calling on the European Union to designate Lebanon-based Hez b ollah a terrorist organization.

The official, speaking on condition of anonymity, said Hagel believes it is not appropriate for members of Congress to write foreign leaders and that they should write the president, instead. More important, the official said, was Hagel’s voting record.

“There were a number of pieces of legislation that actually called on Hezbollah to be a terrorist organization that he supported and voted for,” the official said.

On Hamas, the Palestinian group that controls the Gaza Strip, the official said Hagel also felt his position was being misrepresented. Despite claims to the contrary by critics, Hagel d o es not support direct, unconditional engagement with Hamas and agrees it must first renounce violence, he said.

The officials declined to say which lawmakers Hagel has spoken with but said they included members of both parties. Republican Senator John McCain of Arizona has spoken with him and the two agreed to meet, McCain’s spokesman said.

Outgoing Defense Secretary Leon Panetta, following two meetings with Hagel this week, on Thursday predicted that Hagel would ultimately be confirmed as his successor.

“In these confirmation battles, there are a lot of charges that will be out there,” Panetta said. “But ultimately, the truth prevails. And I think the truth in this case will mean that he’ll be confirmed.”