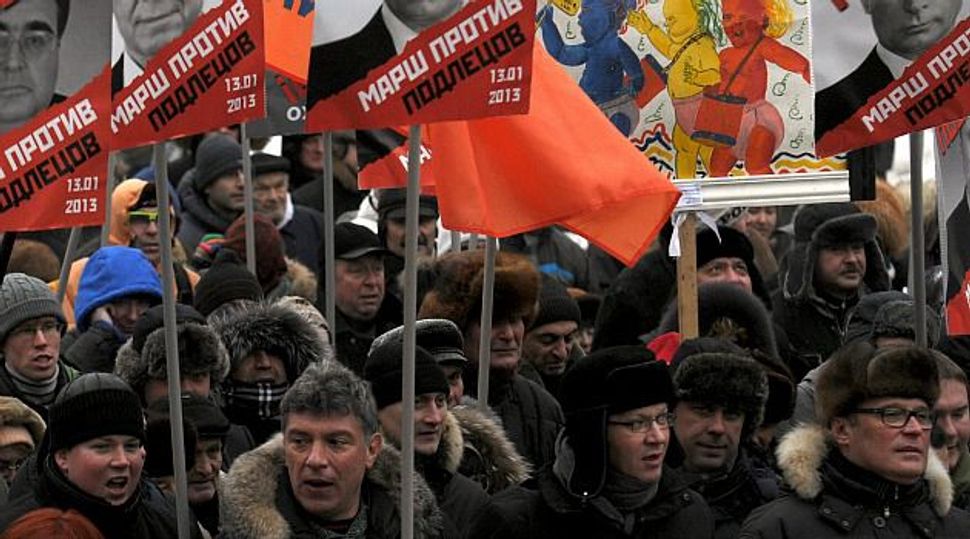 Bundled Up: A massive crowd gathered in Moscow to denounce Vladimir Putin?s ban on American adoptions of Russian orphans. Image by getty images

Tens of thousands of people, some denouncing President Vladimir Putin as a “child-killer”, marched through Moscow on Sunday to protest against a ban on Americans adopting Russian children.

Wrapped in hats and coats against the bitter cold, the protesters shouted “Russia without Putin!” and “Putin is a child-killer!” as they streamed down the city’s Boulevard Ring, watched by thousands of police. A helicopter buzzed overhead.

Many held photographs of pro-Kremlin legislators who backed the ban with the word “Shame!” scrawled across them.

The ban, in force since Jan. 1, has deepened a chill in Russian-U.S. relations in the first year of Putin’s new term and compounded the bitterness between his government and opponents who have been mounting street protests for over a year.

It was rushed through parliament, which is dominated by Putin’s governing party, in retaliation for the Magnitsky Act – U.S. legislation that denies visas to Russians accused of human rights violations and freezes their assets in the United States.

Russian lawmakers who approved the ban say it was justified by the deaths of 19 Russian-born children adopted by American parents in the past decade, and what they perceive as lenient treatment of those parents by U.S. courts and police.

Protesters accused Putin of using orphans as pawns, saying it was the children who would suffer, and some called for the State Duma, the lower house of parliament, to be dissolved.

“Without adoption, such children have no chance,” said Dmitry Belkov, a protest organiser. “This law is a worse thing to do to these children than the treatment animals get in other countries.”

“I realise it’s pointless and that they won’t reverse the law, but I had to be here,” said Maria Volodko, who works at a music publisher. “There could be no salvation for my soul if I weren’t here.”

“For the Americans it’s not such a big deal; they can go on adopting other children around the world. But for our children there is no hope. Our country always take revenge against the weakest ones, makes their lives even more miserable,” she said.

The law is named after Dima Yakovlev, a boy who died after his adoptive American father left him locked in a sweltering car. When Putin signed the law on Dec. 28, he also issued a decree aiming to improve conditions for orphaned children.

Putin’s spokesman, Dmitry Peskov, said the Kremlin understood protesters’ concerns about the welfare of orphans but the state was taking measures to improve their lives. He said demands for the dissolution of the Duma were “unconstructive”.

But defying temperatures of minus 12 degrees Celsius (10 degrees Fahrenheit), protesters held banners saying “against the scoundrels’ law”. Organisers gathered signatures on a petition calling for the repeal of the law but protesters made clear they had little hope that would happen.

The protest, which was permitted by authorities, followed the same route Kremlin opponents have trod in some other demonstrations since Putin’s party won a parliamentary election marred by fraud allegations in December 2011.

The size of the crowd, which police estimated at up to 9,500 but which witnesses said was at least 40,000, will fuel hopes among Putin’s foes that the adoption ban will breath life into an opposition movement that has lost strength after failing to prevent Putin’s election to a six-year term last March.

“I was a bit tired of protesting, disillusioned that it brought no real change,” said Matvey Protokov, a graduate student and schoolteacher.

“But this time, when the illegitimate authorities are not only occupied with their own affairs but step in so deeply and harmfully against the weakest people, you just have to be here, tired or not – there is no other way.”

Anger over the adoption ban is, however, unlikely to be enough to provide the opposition the long-term boost it is seeking to challenge Putin, who has dominated Russia since 2000 as president for over eight years and prime minister for four.

He has signed several laws that critics say are part of a crackdown on dissent in response to the biggest opposition protests since he rose to power, and still has the support of provincial Russians who have long provided his power base.

The United Russia party, which submitted the law and which Putin uses as a source of support, has retaliated against the criticism by branding opponents of the ban as unpatriotic.

On one rooftop along the route, cardboard cutouts depicted opposition leaders with a sign suggesting the march was in support of paedophiles.

In a statement posted on United Russia’s website on Friday, lawmaker Andrei Isayev called the protest a “march of child-sellers” and said the party’s task was to “push (its participants) to the margins of political and public life.”