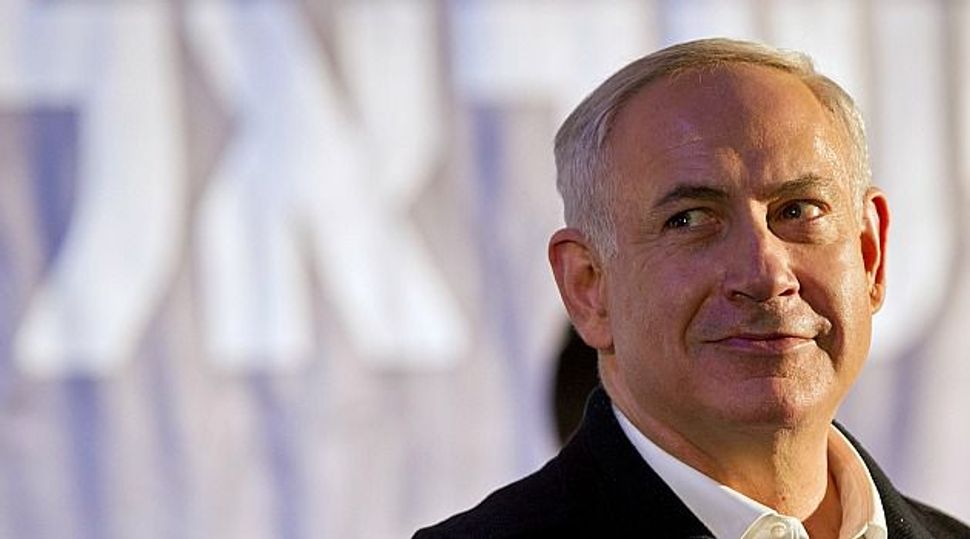 Prime Minister Benjamin Netanyahu has a simple message as he seeks a third term in office – he is a strong man and a vote for him at parliamentary elections on Jan. 22 means Israel will be a powerful nation.

The Hebrew word for strong, “hazak”, peppers the television adverts of his right-wing Likud-Yisrael Beiteinu party like a compulsive mantra and is smeared across the blue-and-white campaign posters that dominate billboards around the country.

Robust leadership is vital, Netanyahu says, to deal with his generation’s biggest challenge – not the decades-old conflict with the Palestinians, but fears that Iran is bent on building an atomic bomb that could one day target the Jewish state.

“My priority, if I’m elected for a next term as prime minister, will be first to stop Iran from getting nuclear weapons,” Netanyahu told a delegation of U.S. senators who visited him in Jerusalem on Jan. 11.

Iran denies that its nuclear programme is aimed at making bombs and says Israel, widely assumed to have the Middle East’s only atomic arsenal, is the region’s greatest menace.

Recent opinion polls suggest that Netanyahu will indeed be re-elected at the head of a coalition government. This means the Iranian issue, which has largely lain dormant since before the U.S. presidential election in November, will return to the fore.

In the diplomatic battle over Iran, Netanyahu, 63, portrays himself as an uncompromising tough guy, a former commando turned conservative hardliner, who will go it alone against Tehran if necessary to thwart what he sees as an existential threat.

But just how strong is he? Not very if you are to believe the previous head of Israel’s Shin Bet intelligence agency, who has launched an astonishing pre-election attack on his former boss, accusing him of being weak and wavering.

“He has no strong core, no tough kernel about which you can say, ‘Know what? In an extreme situation, in a crisis situation, I can follow him. I can trust him,’” Yuval Diskin, who retired as Shin Bet chief in 2011, told the Yedioth Ahronoth daily in a front-page interview published on Jan. 4.

Although opinion polls show most Israelis trust Netanyahu’s handling of security issues, Diskin is not the only senior official to express doubts about his character. That in turn reflects the fact that despite serving as Israeli prime minister longer than anyone bar founding father David Ben-Gurion, Netanyahu remains something of a conundrum.

While his rhetoric can make him sound brash and bullying, he has often proved circumspect and contradictory. Although he has promised reform, he has frequently clung to the status quo, both in domestic and foreign affairs.

The most American of all Israeli premiers, he has arguably presided over the worst relations with a U.S. president, due in part to disagreements over how to handle Iran.

While Netanyahu’s motives and method can be questioned, few doubt that his concerns about Iran are genuine.

“Netanyahu’s raison d’etre is to save Israel from Iran. That is it. That is his mission in the most profound sense. I have seen it up close,” said Naftali Bennett, his chief of staff from 2006 to 2008 who quit the prime minister’s rightist political grouping and pitched his tent in the national-religious camp.

“Everything else is subject and subordinate to Iran. That is potentially an alibi for why he has not made any bold moves during his premiership and just minded the shop,” added Bennett, whose party may well be in the next coalition government.

Known universally in Israel by his childhood nickname ‘Bibi’, Netanyahu works out of a nondescript Jerusalem building, about as far removed from other seats of power, such as the White House or Elysee Palace, as you could hope to find.

The first thing you notice when you enter his small office is a large map of the Middle East, with Israel set to the side and Iran dominating much of the document.

The issue also dominates the conversation as he questions whether Western politicians, who may doubt a nuclear Iran would risk its own destruction by attacking Israel, fully understand the Islamic Republic’s religious leadership.

“They know it’s a very bad thing, but they need to understand the convulsive power of militant Islam…the cult of death, the ideological zeal,” he said in a meeting last year, before the election campaign started.

A stocky, imposing man, Netanyahu has regularly drawn parallels between Nazi Germany and modern-day Iran. On his well-stacked bookshelves, sit a number of biographies of Winston Churchill, a man Netanyahu says he admires because he realised the true dangers posed by Adolf Hitler before other leaders.

History matters to Netanyahu. His father, Benzion, was a renowned Zionist historian and a decisive influence on his son. A fervent believer in the idea of “Greater Israel”, he was opposed to any compromise with the nation’s enemies.

“Bibi is the son of an historian and if you want to understand him, you have to start there,” said one of the prime minister’s closest aides, who declined to be named.

It was thanks to his father’s teaching work in the United States that Netanyahu developed one of his important political tools – fluent English that he has used to great effect to woo influential audiences, notably in the U.S. Congress.

After studying at a U.S. high school, he returned to Israel for his military service. He served in the elite special forces – the same unit his charismatic brother fought and died in.

Yonatan became a national hero after he was killed in 1976 in a daring raid to free more than 100 Israelis being held by pro-Palestinian hijackers at Entebbe Airport, in Uganda.

Armchair psychoanalysts have suggested that the killing stoked a deep dislike of Palestinians in the young Netanyahu. What is certainly true is that Yonatan’s death helped propel Bibi into the limelight, from where he has rarely strayed.

A rapid rise in the world of politics saw him became Israel’s youngest prime minister in 1996. But his government survived barely three years, buffeted by crises and squabbles.

He returned to the top a decade later as a less brash leader, who was nimbler at coalition politics, enabling him to secure rare stability and win cover billing in Time magazine as “The King of Israel”.

But the calm of his coalition over the past four years has not been matched by tranquillity within his inner circle, which centres around the so-called Aquarium – a sealed-off cluster of offices where the toughest decisions of state are made.

“Bibi demands loyalty, but I don’t think that his behaviour makes you feel necessarily loyal. He is very, very suspicious, even towards his closest guys,” says a former official, who quit his post during the last term and declined to be named.

After taking office in 2009, Netanyahu made a major speech, declaring that he was ready to accept a demilitarized Palestinian state alongside the Jewish state, ending years of opposition to such a move at a personal and party level.

Netanyahu’s commitment to this pledge is widely questioned.

At a meeting in 2010, U.S. Secretary of State Hillary Clinton asked the Israeli leader to “show me some leg” and explain what concessions he was willing to make to the Palestinians, according to someone present at the meeting.

Netanyahu shooed everyone from the room and talked alone with Clinton, afraid his comments would otherwise leak.

But he never showed his leg to the wider world and the Palestinian issue was swiftly shunted down the global agenda after direct peace talks broke down in late 2010 over continued Jewish settlement building in the occupied West Bank.

To the exasperation of his Western allies, Netanyahu has pursued the settlement drive, announcing in December alone plans for more than 10,000 homes on land seized by Israel in the 1967 war – a move that jeopardises the so-called two-state solution of an independent Palestine sitting alongside the Jewish state.

One of his most vocal critics, Gideon Levy, a prominent left-wing journalist, accuses Netanyahu of deliberately playing up the Iranian threat to divert attention from the Palestinians.

“Spreading fear. That is his big capacity. To spread fear,” said Levy, who regularly rails against Netanyahu in Israel’s liberal Haaretz newspaper.

“I think he deeply, deeply does not believe in peace with the Arabs in general and the Palestinians in particular. He just wants to get the Palestinian issue off the table.”

Without significant pressure from Washington, it will remain off the table for the foreseeable future, with Netanyahu’s own party drifting ever further rightwards.

According to Israeli calculations, Iran may be only a couple of months away from crossing a “clear red line” for uranium enrichment that Netanyahu spelled out at the United Nations in September.

For all Netanyahu’s dire warnings, a poll this month by the Times of Israel showed just 12 percent of Israelis saw Iran as the top priority facing the next government, compared with 16 percent who named deteriorating relations with the Palestinians and 43 percent who pointed to economic problems.

“Despite their hostility and differences, the Iranian and Israeli governments have one thing in common, they both try to portray outside threats as the most urgent issue, but their citizens disagree,” says Meir Javedanfar, a Middle East analyst at the Interdisciplinary Center in Herzliya, near Tel Aviv.

“It’s time for both countries to listen to their public.”

That is unlikely to happen if Netanyahu wins next week.

Members of his inner circle say his legacy depends almost entirely on whether he prevents Iran from obtaining nuclear weapons.

Even his political opponents credit him with putting the issue on the top of the global agenda, helping to convince Western nations to impose increasingly tough sanctions on Iran.

But many pour cold water on the idea that he is ready to unleash a hazardous, long-range war to try to halt Iran.

For all his tough talk, Netanyahu has only launched one, brief, military confrontation in more than seven years in office – a conflict against Hamas militants in Gaza last November that ended after eight days without the threatened land offensive.

Reflecting the view of his critics, who wanted the army to be sent in, Israeli daily Maariv printed a cartoon of Netanyahu carrying an object under his arm marked “backbone for rent”.

But some influential figures in the security establishment are starting to believe that Netanyahu might be ready to strike at the Islamic Republic for history, despite the risks.

In 2011 a senior Israeli strategist, screwing up his fingers to show two tiny holes, said dismissively of Netanyahu: “The man has balls the size of raisins.”

A year on, the same official has changed his tune.

“It’s amazing,” he said. “He is really serious about Iran.”