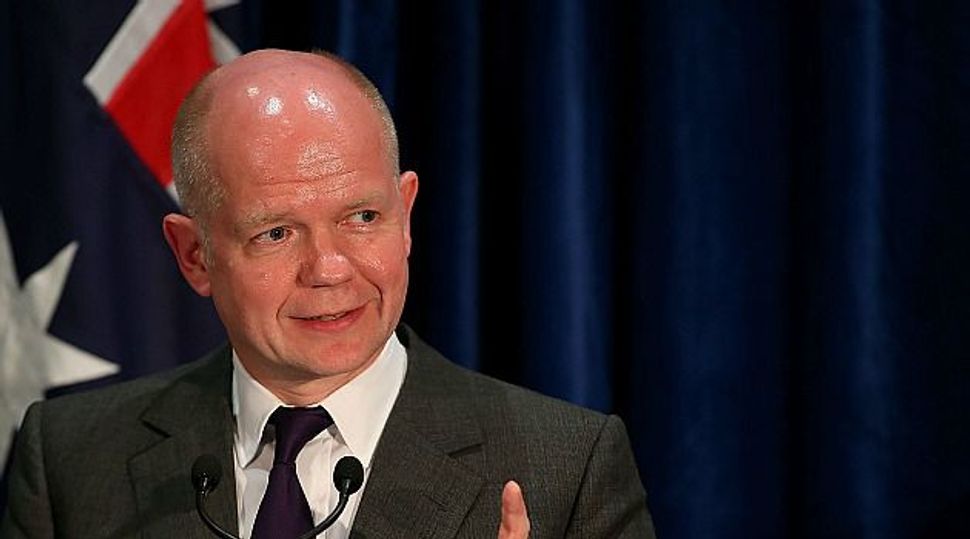 Fading Hopes: British Foreign Secretary William Hague has warned Israel it will face decreasing international support if it continues to expand the occupation of Palestinian land. Image by getty images

Britain said on Tuesday prospects for a two-state solution to the Israeli-Palestinian conflict are almost dead because of expanding Jewish settlement in occupied territory, and warned Israel it was losing international support.

Foreign Secretary William Hague spoke as Israelis voted in an election likely to yield a hardline rightist government keener to thicken settlement on land where Palestinians want to establish statehood than seek peace.

“I hope that whatever Israeli government emerges …. that it will recognise that we are approaching the last chance to bring about such a solution,” Hague told parliament.

“I condemn recent Israeli decisions to expand settlements. I speak regularly to Israeli leaders stressing our profound concern that Israel’s settlement policy is losing it the support of the international community and will make a two-state solution impossible,” he said.

Asked whether the European Union should tie trade with Israel to progress on peace talks, Hague said the bloc still had work to do, in conjunction with the United States, to establish “incentives and disincentives” regarding further negotiations.

“…There is a clock ticking with potentially disastrous consequences for the peace process,” he added.

Opinion polls predict Israeli Prime Minister Benjamin Netanyahu will return to power at the head of a coalition dominated by religious and nationalist pro-settler parties which give short shrift to U.S.-backed peace negotiations.

They have been frozen since 2010 over Palestinian objections to continued settlement construction. Netanyahu has demanded the Palestinians return to talks without preconditions.

Hague said 2013 was a crucial year for the moribund peace process given Israeli elections for a new government and the start of U.S. President Barack Obama’s second term.

“If we do not make progress in the coming year, people will increasingly conclude that a two-state solution has become impossible,” said Hague. Both Israelis and Palestinians should return to talks without preconditions, he said.

Hague said he would make peace talks and efforts towards a two-state solution – the basis of a U.S.-backed peace process for almost 20 years – “top of the agenda” during a planned visit to Washington next week