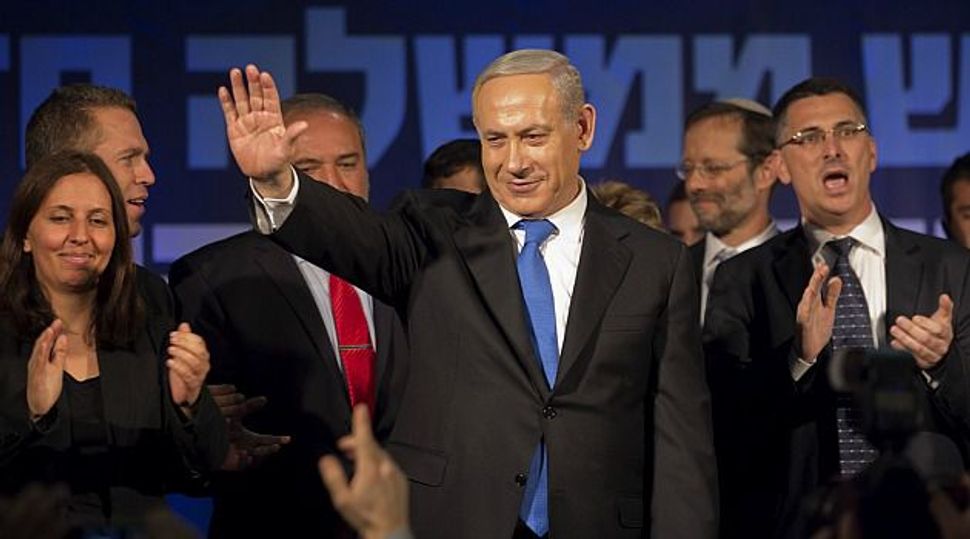 His party shrunk, his opponents grew and his challengers multiplied.

But with the results in, it seems Benjamin Netanyahu survived the Knesset elections on Jan. 22 to serve another term as prime minister.

Netanyahu faces a bumpy road ahead. His Likud party, together with the nationalist Yisrael Beiteinu, fell to 31 seats in the voting from its current representation of 42.

And another political newcomer, Naftali Bennett, is likely to push Netanyahu to the right on security issues. His Jewish Home party, a successor to the National Religious Party, quadrupled its representation from three to 12 seats.

Together with the Sephardic Orthodox Shas party and the haredi Orthodox United Torah Judaism, the right-wing Knesset bloc will hold 62 of the Knesset’s 120 seats – a slim majority.

That’s anything but a mandate for Netanyahu, who campaigned on the slogan “A strong prime minister, a strong Israel.” Instead of being able to lead a new coalition with a large party behind him, Netanyahu will have to negotiate with rivals and forge compromises with opposing camps.

Judging from the successes of Yesh Atid, Labor and Jewish Home, Israelis cast a resounding vote for progressive economic reform and new leaders in their parliament.

The biggest thorn in the prime minister’s side looks to be Lapid. Unlike the fiscally conservative Netanyahu, Lapid won support by calling for housing reform, opposing tax increases for the middle class and including haredi yeshiva students in Israel’s mandatory military conscription.

But Netanyahu’s biggest concern may be a rival in his own right-wing camp, Bennett, who appears to have picked up most of the seats lost by Likud-Beiteinu.

While Netanyahu remains ambiguous on the question of a Palestinian state – he formally endorsed the idea in a 2009 speech at Bar-Ilan University but has hardly mentioned it since or done much to promote it – Bennett passionately opposes the idea. Instead, Bennett, a former high-tech entrepreneur, calls for annexing much of the West Bank.

Even within Netanyahu’s party, nationalists on the Likud list who never before made it into the Knesset will now occupy seats. Among them is Moshe Feiglin, leader of the Jewish Leadership faction of Likud, who favors West Bank annexation and encouraging Arabs who hold Israeli citizenship to leave Israel.

The rise of Yesh Atid and Jewish Home do offer Netanyahu some new opportunities, too. Rather than rely on the haredi Orthodox parties such as Shas and United Torah Judaism for the coalition, Netanyahu could make common cause with Yesh Atid and Jewish Home, both of which want to draft haredi Israelis into the army or some form of national service – even though they may significantly disagree on security matters. Lapid talked during the campaign of his willingness to join a Netanyahu coalition, influencing the government from within rather than from the opposition.

So even though the haredi parties grew by three seats – Shas went to 13 from 11 and United Torah Judaism to six from five, according to exit polls – Lapid’s willingness to provide Netanyahu with an equally large chunk of seats to build his coalition means that the haredi parties may have lost their political leverage to keep yeshiva students out of Israel’s military draft.

For its part, Labor looks destined to lead the Knesset’s opposition; its chairwoman, Shelly Yachimovich, has vowed not to join a Netanyahu coalition. Tzipi Livni’s new Hatnua party, which won just six seats, is likely to stay in the opposition, too.

The election represented a major defeat for Livni, who in the last election led the Kadima party to 28 seats – more than any other party. This time, the eviscerated Kadima failed to win even a single seat.

Hatnua’s poor showing also suggested how little of the election was about negotiations with the Palestinians. Livni made much of the issue during the campaign, but it clearly failed to resonate with voters. Hatnua’s six seats equaled the showing of Meretz, the solidly left-wing party. By contrast, Labor, traditionally a promoter of peace talks, barely raised the issue in the campaign. Instead it focused on socioeconomic issues and made significant Knesset gains.

With Election Day over, the coalition building begins: To win another term as prime minister, Netanyahu now must cobble together an alliance of at least 61 Knesset members to form Israel’s next government. Who he chooses – and who agrees to join him – will determine a great deal about the course charted in the years to come by the Israeli government.

ELECTION RESULTS (according to exit polling):