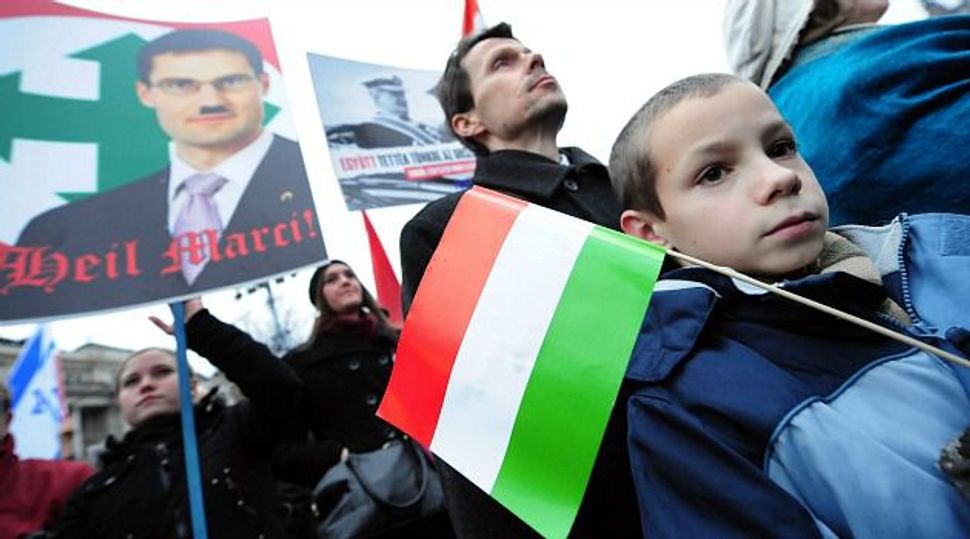 Hungarians rally to denounce anti-Semitic Jobbik Party, which called for creation of a list of Jews deemed ?security risks.? Image by getty images

The lights of the ancient Coliseum in Rome will be dimmed next week to protest anti-Semitic and racist acts and statements by Hungary’s far-right Jobbik Party.

The initiative, sponsored by Rome’s city government and the Rome Jewish community, will take place Jan. 27 on International Holocaust Memorial Day, and will be one of scores of events across Italy marking the day.

In a statement Wednesday announcing the initiative, Rome Mayor Gianni Alemanno noted “acts of anti-Semitism that are spreading in a disturbing manner in Hungary, prompted by the extreme right-wing Jobbik Party.”

“By turning off the lights of the Coliseum, the municipal government and the Jewish community of Rome want to condemn in a symbolic way xenophobic actions and ideologies, not only by the Hungarian extreme right but in all of Europe. It is our duty to protest against any form of incitement to hatred,” Alemanno said.

Rome Jewish community President Riccardo Pacifici said that in Hungary “the nightmare of anti-Semitism lives, with a leap backward into the past that recalls the 1930s. We, Italian and European citizens, can’t tolerate this.”