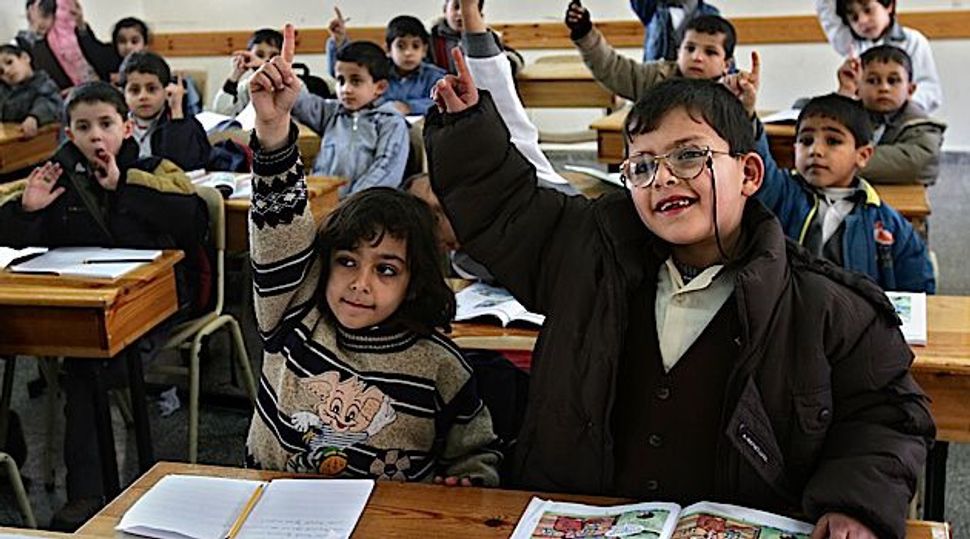 Islamist Hamas authorities plan to expand Hebrew-language classes in the Gaza Strip’s high schools to help Palestinians know their enemy in times of conflict with Israel.

Far from a sign that peace will soon break out, Hamas’s promotion of Hebrew learning in the Israeli-blockaded Mediterranean enclave aims to make linguistic skill a useful new front in the struggle against the Jewish state.

Hamas rejects Israel’s existence and seeks to supplant it with a Palestinian state, but says Gazans stand to gain from being able to monitor the discourse of a militarily vastly superior adversary in its own language.

Hamas aired threatening video and radio messages to Israelis in Hebrew during eight days of clashes in November in which militants peppered the Jewish state with rocket salvoes before Egypt brokered a ceasefire. Hamas’s Hebrew broadcasts underlined a desire to use Hebrew as a propaganda tool in the conflict.

The Ezzedine al-Qassam Brigades, Hamas’s armed wing, have even begun issuing statements in Hebrew via its Twitter account.

Soumaya al-Nakhala, a senior Hamas education ministry official, told Reuters that knowing one’s enemy is consistent with the teachings of the Prophet Mohammed.

“Expanding (Hebrew) teaching comes as a result of our plan and meeting greater demand by students to learn Hebrew. They want to learn the language of their enemy so they can avoid their tricks and evil,” al-Nakhala said.

She was alluding to acquiring a grasp of Israel’s politics, policy and strategy towards Palestinians by following its famously vibrant print and electronic media.

Hebrew classes are now limited to ninth-grade students, but will expand to higher grades starting next semester, she said.

Twenty years ago, many of Gaza’s 1.5 million Palestinians could speak and understand Hebrew from having worked in the Jewish state or spending time in prison there for alleged involvement in militant attacks.

But Gaza has been largely isolated from Israel since 1994, when it gained limited self-rule through interim peace deals and Israel shut its gates to most Gazan labourers, citing security threats and mounting cross-border violence.

Today, only about 50,000 Gazans – often former labourers and prisoners in Israel – retain a grasp of Hebrew.

Younger adults generally can speak only Arabic despite living next door to Israel and using its shekel currency.

“We chose to learn Hebrew because we felt it was an interesting language, and also because when you learn your enemy’s language you also learn how to avoid their evil,” said 14-year-old student Mohammed Seyam.

About 750 students are already studying Hebrew as part of a pilot project in Gaza, Hamas officials said, and the pro-Hamas Islamic University has launched a faculty of Hebrew studies.

“This is a trial programme and we hope next year to expand the number of students learning Hebrew,” Wafa Mqat, headmaster of a Gaza City school conducting the pilot course.

Khaled Al-Baba, among a number of teachers who picked up Hebrew during Israel’s occupation of Gaza from 1967 until 2005, said many pupils now preferred to study Hebrew over previous favourite French.

In his classroom one day, Baba fired questions at his pupils in Hebrew and some boasted they already knew the language well enough to decipher instructions on Israeli-made products sold at Gaza supermarkets and follow Israeli media.

Hebrew is not a part of the school curriculum in the West Bank, where the Western-backed Palestinian Authority exercises self-rule in areas not occupied by Israeli settlers and has already recognised the Jewish state.

The Israeli armed forces and security services have many officers with a strong command of Arabic, particularly intelligence officers who interrogate Palestinian detainees. (Editing by Mark Heinrich)