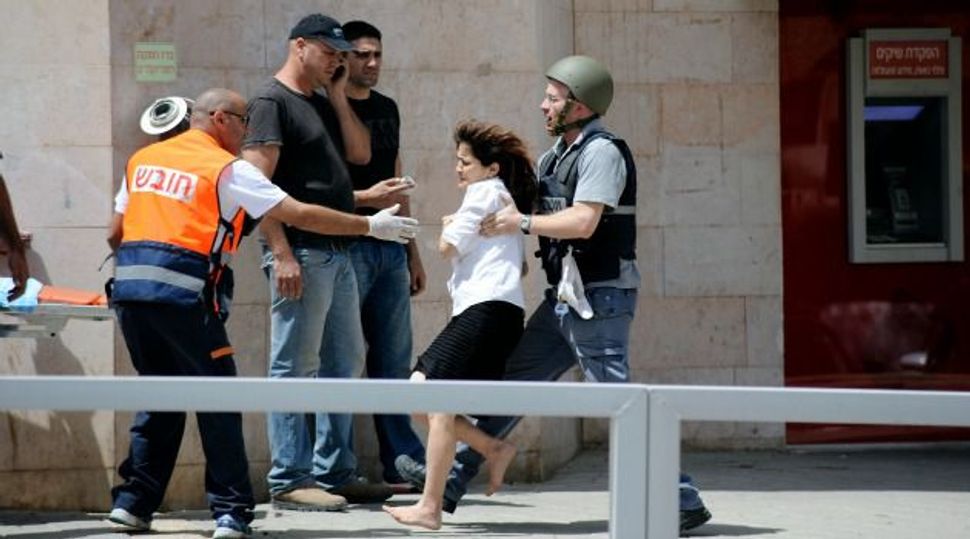 Bank Rampage: Israeli woman is freed during hostage drama and shooting spree sparked by a man?s failure to access cash in the town of Beersheva. Image by getty images

A gunman shot dead four people execution-style in a bank in Israel on Monday after being refused an overdraft and cash from its automatic teller machine.

The assailant, identified by media reports as a former paramilitary border policeman, killed himself after police raided the Bank Hapoalim branch in the southern city of Beersheba to free his hostages.

“It appears that we are talking about a lone individual who came to the bank in the morning hours, sought cover for a debt, a loan, and did not get it,” Internal Security Minister Yitzhak Aharonovitch said on Army Radio.

After finding that he could also not draw cash from the automatic dispenser, the man “came back with a pistol and shot dead four people … bank employees and customers”, Aharonovitch said.

“He took a hostage, held her for close to an hour or more. The moment the police forces burst in, he killed himself – shot himself and committed suicide,” he said, without disclosing the gunman’s identity.

Police initially described the incident as a robbery but later said the assailant appeared to have known his victims and shot them without demanding any money.

Witnesses quoted by Israeli media said the gunman first killed the bank guard and then shot three people who were lying on the floor, checking the pulse of one of them to make sure he was dead.

Police initially announced that two gunmen had entered the bank and that one had been apprehended, but later said they were still investigating whether the second man was an accomplice.

Prime Minister Benjamin Netanyahu called the incident a “great tragedy” for Israel, where soldiers carrying weapons are a common sight but gun laws are strict for private individuals.

“It is not a common event in Israel. An attack like this must not (be allowed) to recur,” Netanyahu said at a meeting of his Likud party faction in parliament.