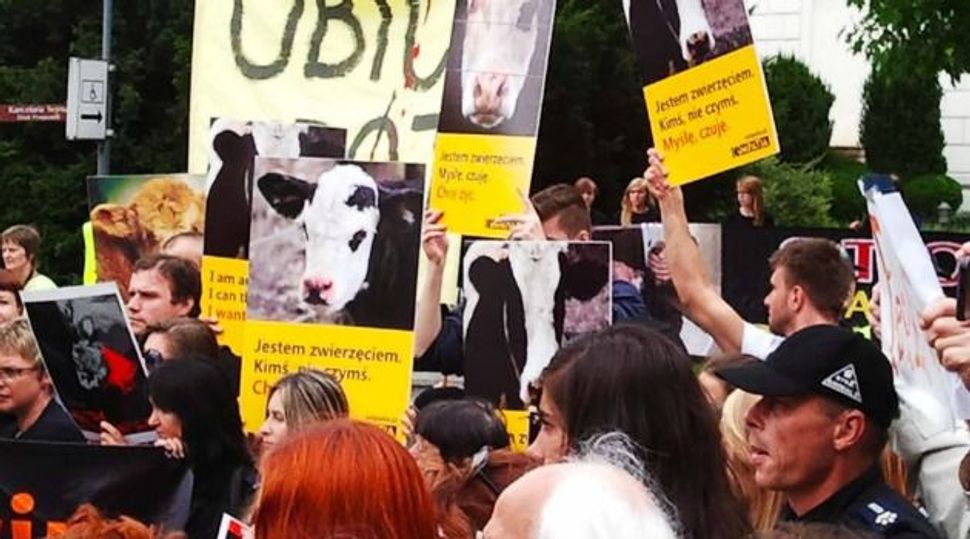 Read Between the Lines: Animal rights advocates demonstrate in favor of a ban on kosher slaughter in Poland. Many Jews see the campaign as a sign that anti-Semitism is still a potent force. Image by jta

(JTA) — A few weeks before Poland’s parliament voted last month on whether to overturn a ban on ritual slaughter, Rabbi Menachem Margolin was scheduled to meet the Polish president in an effort to find a solution to the problem.

The ban had been imposed in January, when a Polish constitutional court outlawed Jewish and Muslim ritual slaughter in response to a petition filed by animal welfare activists.

Margolin, director of the European Jewish Association and the Rabbinical Centre of Europe, both based in Brussels, saw a reason for the cancellation: Polish Chief Rabbi Michael Schudrich, whom Margolin accused of “torpedoing” the meeting.

Schudrich denied the charge, and one of his associates told JTA that the meeting was canceled after the president’s office learned Schudrich would not be attending the meeting with Margolin.

When parliament followed through with its 222-178 vote to uphold the ban on Jewish ritual slaughter, known as shechitah, Margolin again blamed Schudrich, calling him incompetent and demanding that he resign. Schudrich in turn accused Margolin of meddling and jeopardizing Polish Jewry’s coordinated campaign to overturn the ban.

To outsiders, the back-and-forth accusations might seem bizarre. Why would two rabbis who ostensibly share the same goal of reinstating the legality of shechitah in Poland go at each other’s throats? The spat goes to the heart of an issue that has bedeviled communities across Eastern Europe for more than two decades, ever since the fall of the Iron Curtain: control.

Schudrich, a U.S.-born rabbi who has lived in Poland almost uninterrupted since 1992, long has ruled the roost in Poland. He was named chief rabbi in 2004 and has close ties with Polish leaders.

Perhaps because Schudrich has been around almost since the fall of communism, Poland is one of the ex-communist countries where Jewish affairs are not dominated by Chabad, the hasidic Orthodox outreach movement.

Chabad operates only two centers in the country, compared to six serving the similarly sized Jewish community in Belarus and more than 30 each in Russia and Ukraine, where Chabad rabbis have laid claim to the title of chief rabbi – to the occasional consternation of non-Chabad colleagues. Chabad is eager to expand in Poland, says Rabbi Shalom Ber Stambler, the movement’s emissary in Warsaw.

Margolin, who was born in Israel, is affiliated with Chabad. One of the groups he heads, the Rabbinical Centre of Europe, has a 17-member rabbinical council that includes some of the leading Chabad rabbis in Europe. Among them are Rabbi Berel Lazar, one of Russia’s two chief rabbis, Hungary’s Baruch Oberlander and Binyomin Jacobs of the Netherlands.

The European Jewish Association, the other group headed by Margolin, also has Chabad ties.

Margolin sees Schudrich as more interested in preserving his own power and influence within Poland than in cooperating in a broad-based international effort to overturn the shechitah ban.

Schudrich acts “irresponsibly, as though Poland is his own fiefdom, while ignoring the need for coordinated action on an issue which affects all of European Jewry and beyond,” Margolin said. His “refusal to consult is the antithesis to how Holland’s Jewish community collaborated with international Jewish groups until the successful overturning of the shechitah ban passed in Dutch parliament in 2011.”

For his part, Schudrich says the issue is not about fiefdoms, noting that he has the backing of Poland’s Union of Jewish Communities and has been in contact with the European Jewish Congress and the Conference of European Rabbis. Rather, he says, the issue is avoiding disrupting the coordinated effort already underway to reverse the ban.

We “cannot risk that our efforts will be hindered by the actions of people who will not bear the consequences of their interference,” Schudrich said in a joint statement with the president of Poland’s Union of Jewish Communities, Piotr Kadlcik. The reference was to Margolin’s European Jewish Association. “This is the same organization that called for unity on one day only for it to issue an appallingly disrespectful and inaccurate attack on Poland’s Chief Rabbi Schudrich the next day.”

The European Jewish Association “has the right to protest,” said the statement, which was posted on the union’s website. “However, as the representatives of the Jews in Poland, we consider it unacceptable that any legal or policy initiatives from abroad are initiated without the coordination, or at least consultation, with us.”

Matters took a stranger turn when the European Jewish Association announced last week that it had hired a Polish nationalist lawyer – Roman Giertych, the one-time head of the now-disbanded League of Polish Families, a far-right political movement accused of anti-Semitism – to challenge the shechitah ban.

A spokesman for the European Jewish Association, Asher Gold, said Giertych was hired “because of his professional skills and connections in the Polish political scene.”

Until the ban, ritual slaughter was a $500-million-a-year industry in Poland, producing a large portion of the meat for export. After the ban was imposed in January, some kosher and halal slaughterhouses halted production while others continued, sources said, out of lack of clarity about the law.

For the time being, it seems that both Schudrich and Margolin are proceeding with their competing campaigns.