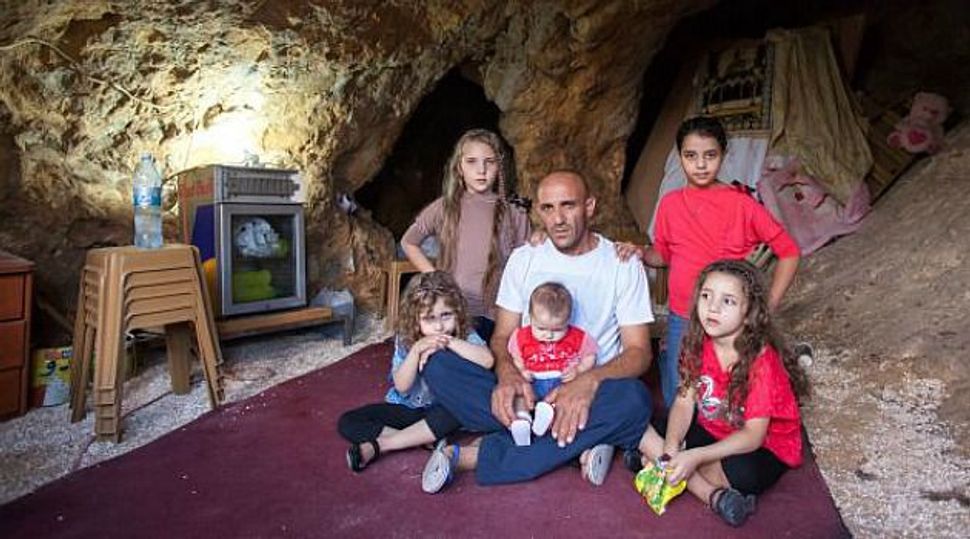 Cave Man: Khaled Zir and his famiiy were left homeless after Jerusalem authorities bulldozed his home in the SIlwan neighborhood. Image by haaretz

Jerusalem municipal bulldozers demolished the home of the Zir family of Silwan last week before the courts ruled on the issue. Left homeless, the family has moved into a cave.

Khaled Zir, a Silwan resident and father of five children, the smallest of them four months old, lived for the past seven years in a 60-square meter home made of drywall and tin. The home was built on an open area owned by the family in the heart of the East Jerusalem neighborhood. The Zirs built around their home a dovecote, a small chicken coop and planted a grove.

Half a year ago, Zir received an administrative order from the city to demolish his home because his family’s land is zoned as open area within the national park surrounding the walls of the Old City. His lawyer, Sammy Arshid, appealed to the city to cancel the order, which he claimed to be illegal. “My client claims someone who is not authorized to order the destruction of buildings issued the announcements,” wrote Arshid.

Although the city did not respond to Arshid regarding the rejections and in contradiction of the guideline not to carry out a demolition order as long as an objection stands, bulldozers arrived last week to carry out the order. Under the cover of inspectors from the municipality and the Israel Nature and Parks Authority and backed by a large police force, the bulldozers demolished the home, dovecot and coop.