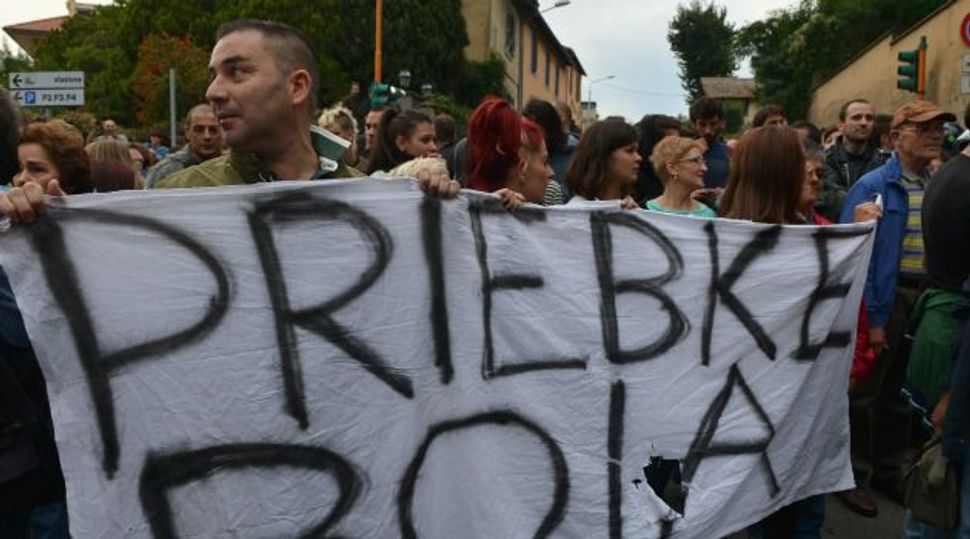 Enraged Italians shouted abuse and kicked the hearse of a Nazi war criminal at his funeral ceremony on Tuesday, which went ahead near Rome despite attempts by the local mayor to prevent it.

He had been serving a life sentence under house arrest in Rome for his role in the killing of 335 civilians in 1944 in caves near the capital, one of Italy’s worst wartime massacres, for which he never apologised.

Scores of protesters shouting “Executioner! Executioner!” rushed at the funeral car as it passed through the gates of a religious institute in Albano Laziale, television pictures showed.

Lines of riot police struggled to hold back the crowd at the ceremony, which took place just 20 kilometres from the site of the massacre after the local police chief overruled a banning order issued by the mayor, Italian media reported.

Priebke’s body was expected to be returned to Rome to be cremated.

“He should be cremated and chucked out to sea. There should never be a place where this person can rest in peace,” Bruna Bernardini, a resident of Rome’s centuries-old Jewish ghetto, told Reuters.

Rome’s centre-left mayor Ignazio Marino had said Priebke’s burial in the capital would be an insult.

The government in Argentina, where Priebke escaped to after the war, had earlier refused to allow his body to be returned.

The town hall of Priebke’s hometown of Hennigsdorf near Berlin also ruled out burying him there, fearing his grave could become a pilgrimage site for German neo-Nazis.

In March 1944, Priebke was in charge of SS troops who executed civilians in the Ardeatine Caves in retaliation for the killings of 33 German soldiers by a partisan group.

Adolf Hitler had ordered occupation forces to respond by executing 10 Italians for every German killed. The victims were rounded up from jails, streets and their homes.