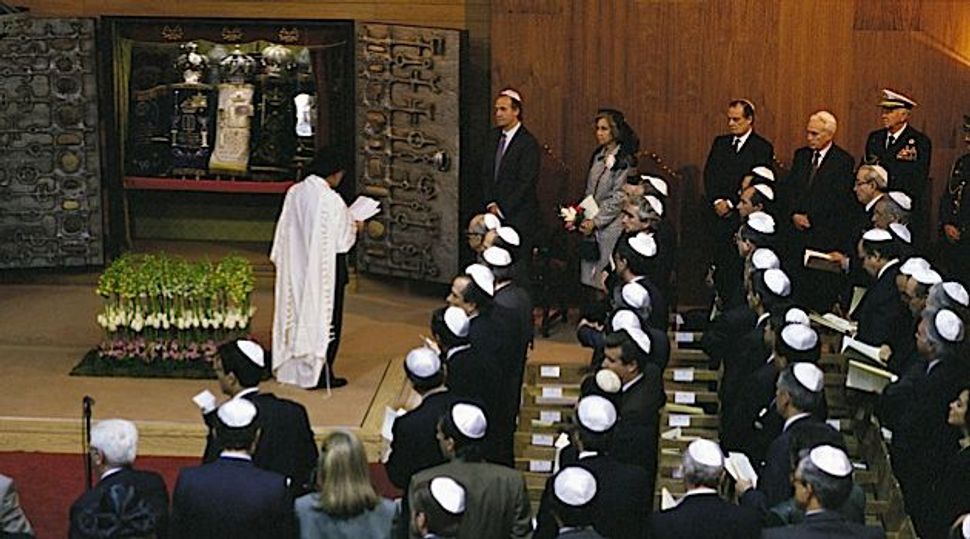 Synagogue: Inside the main Sephardic synagogue in Madrid at a 2006 ceremony attended by the Spanish king and queen. Image by Getty Images

After 522 years, Spain is inviting the Jews back — for real this time.

Spain’s government announced in November 2012 a new law to give fast-track citizenship to Sephardic Jews. The Forward published an essay in January 2014 reporting that the government had yet to follow through on the promise.

The law still must be debated and passed by the Spanish parliament.

Spain’s Jewish federation, the Federación de Comunidades Judías de España, praised the new law. “The minister of Justice, Alberto Ruiz Gallardon, kept his word, and this honors him,” the federation’s statement read. “Spain, once again, not only did not disappoint, but made a historical step for the Sephardic Jews…”

Under the newly proposed law, Sephardic Jews can prove their status as Sephardim by obtaining a certificate from the Federacíon attesting to the fact that they belong to the Sephardic community.

The law also allows for certification as Sephardic by a “competent rabbinical authority” who is “legally recognized” in their country of origin. It’s not clear from the language of the bill what it would mean for a rabbi to be “legally recognized,” particularly in countries like the United States that don’t have official state-recognized rabbinic authorities.

People of Sephardic heritage who are not Jewish can also apply under the law, which explicitly states that Sephardim can apply regardless of their religion and beliefs.

The law states that the government will take into account the applicant’s surnames, their languages, and “other indicators that demonstrate their belonging to that cultural community.” Applicants must also prove their special connection with the culture and customs of Spain.

The government’s Dirección General de los Registros y del Notariado will be required to corroborate the applicants’ claims, including the veracity of the rabbinical authority and Sephardic community they cite in their application.

In a lengthy preamble, the law outlines the history of Spanish-Jewish relations. “In truth, the Jewish presence in Iberian lands was firm and ancient, palpable even in the vestiges of words and of stone,” the law reads.