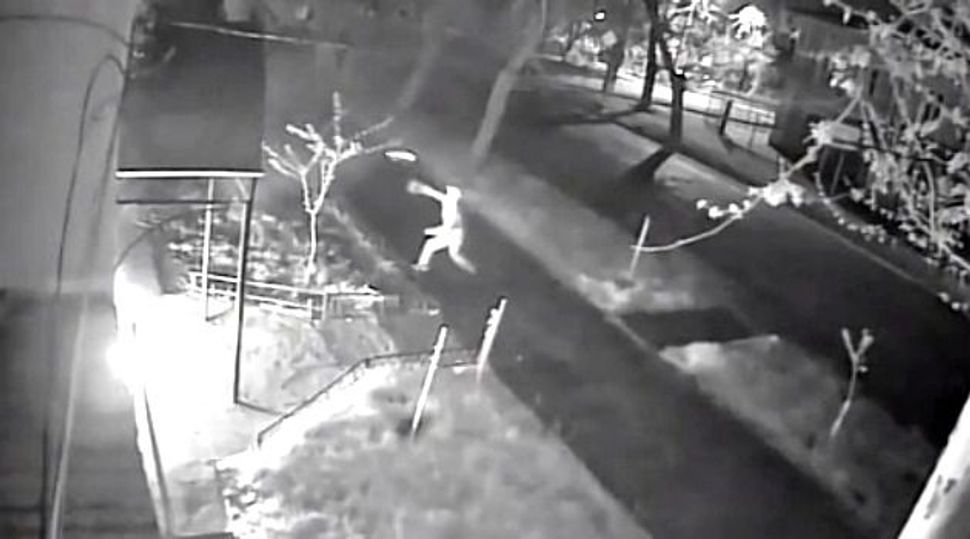 A still from the video footage shows the Nikolayev synagogue in Ukraine being firebombed. Image by Yisrolik Gottlib

The main synagogue in Nikolayev, located in the southeast of Ukraine, reportedly was firebombed.

The synagogue was empty of worshipers when it was firebombed early Saturday morning, according to the Chabad-affiliated Shturem.org website.

Two Molotov cocktails were thrown at the synagogue’s door and window, according to the report, which cites Yisroel Gotlieb, son of the city’s Chief Rabbi Sholom Gotlieb.

The attack was recorded by the synagogue’s closed circuit television security camera and uploaded to YouTube.

A passer-by put out the fires with a fire extinguisher, according to the report.

The Giymat Rosa Synagogue in Zaporizhia, located 250 miles southeast of Kiev, in eastern Ukraine, was firebombed in late February.

The attack comes as fliers calling on Jews to register with separatists and pay special taxes where distributed last week in Donetsk in eastern Ukraine, where pro-Russian separatists led by Denis Pushilin earlier this month took over several government buildings and declared their secession from Ukraine as the Donetsk Republic amid a standoff with authorities. Pushilin has denied any connection to the flyers, calling them a provocation.