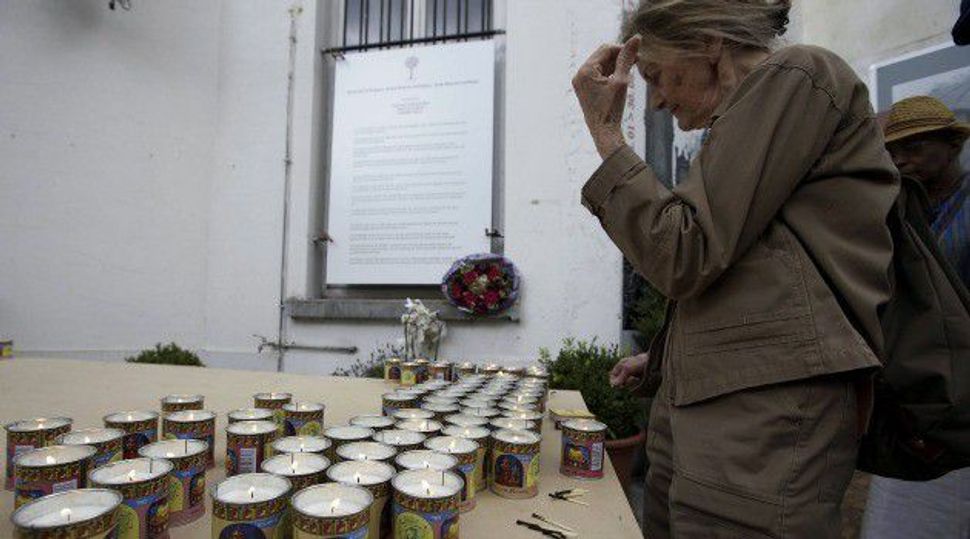 Grief and Hatred: Mourners light candles for victims of shooting rampage at the Jewish Museum in Brussels. Image by getty images

Dozens of men at an anti-Israel demonstration in Antwerp shouted slogans about slaughtering Jews.

Approximately 500 people attended Saturday’s protest in the capital of Belgium’s Flemish region, where one of the speakers used a loudspeaker to chant a call in Arabic that means “slaughter the Jews.”

The demonstration against Israel’s assault on Hamas in Gaza happened amid a wave of anti-Semitic attacks in Western Europe that coincided with the Israeli actions, and one day before a similar demonstration in Paris escalated into what European Jewish Congress President Moshe Kantor called an “attempted lynch” outside a local synagogue.

The Belgian League Against Anti-Semitism filed a complaint for incitement to violence against participants and organizers of the Antwerp demonstration, dozens of whom were recorded making the calls.

“International politics cannot serve as a pretext for incitement to anti-Semitic hatred,” the organization’s president, Joel Rubinfeld, said in a statement.

It also condemned the presence at the demonstration of three local politicians: Karim Bachar of the Flemish Socialist Party; Ikrame Kastit of the Flemish Green Party; and Mohamed Chebaa of Labor.

The protesters also called out “Jews, remember Khaybar, the army of Muhammad is returning,” referencing a seventh-century slaughter against Jews in Saudi Arabia. Earlier this month, the same call was heard at a demonstration in The Hague in favor of the ISIS Sunni militia in Syria and Iraq. The protest was held six days before Israel launched its military operation in Gaza.

The Simon Wiesenthal Center in a letter to Dutch Prime Minister Mark Rutte protested that the demonstration was allowed to take place.

“Unless Jihadism in your country is totally quashed, Dutch returnees from their Syrian baptism of fire and Jihadist websites at home will menace Jewish, Muslim and all other citizens of the Netherlands,” wrote Shimon Samuels, the center’s international relations director.

In Paris, approximately 200 Jews were besieged on Sunday inside the synagogue by dozens of young men who confronted police and Jewish guards outside in what turned into a street brawl before police reinforcements dispersed the crowd.

The CRIF umbrella group of Jewish organizations and communities appealed to French President Francois Hollande to temporarily ban “pro-Hamas protests” for fear they would escalate into similar attacks.