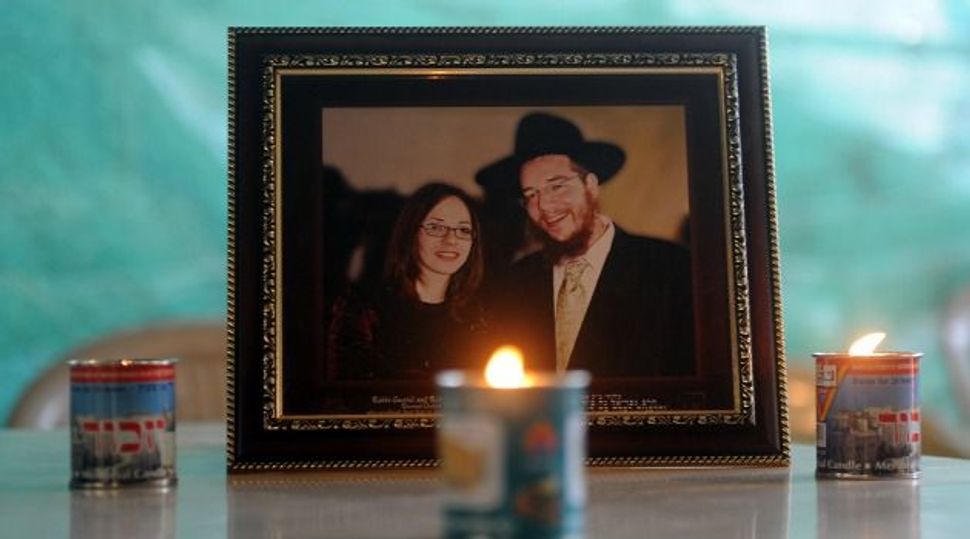 Scene of Trauma: Memorial candles are seen placed in front of a photograph of slain Rabbi Gavriel Holtzberg and his wife Rivkah, at the Chabad (Nariman) house in Mumbai, which Islamist militants stormed in 2008. Image by Getty Images

The letter, reported by Indian news outlets on Sunday, reportedly had threatened to launch the attacks on Friday, the last Friday of the Muslim holy month of Ramadan. The letter was signed by the Indian Mujahideen.

Mumbai police commissioner Rakesh Maria ordered an investigation into who sent the letter and its threats, the Times of India reported.

“Maria you were lucky in 1993 to have escaped the wrath but this time you will not. Now we are going to carry a blast and it is a challenge for you if you can stop, stop it. Mujahideen,” the newspaper said that the letter read.

On March 12, 1993, a series of explosions throughout Mumbai killed 257 people and injured 713. Organized crime groups were responsible for the blasts.

In November 2008, six Jews were killed at a Mumbai Chabad House as part of attacks on several sites throughout the city by an Islamist Pakistani group that left 166 dead and hundreds wounded.

Mumbai police reportedly are on high alert through the end of the Ramadan holiday later this week.